For the first time since I arrived in India, I left Mumbai with Kate and Tom and Baby Raj and we went on what was their first road trip in this country; they didn’t own a car to do that with until after I arrived, and shortly after Raj arrived a month ago. Often it’s easier to travel with a very young baby than an older one, and they wanted to take me somewhere out of the city, so… we had a brief holiday in Lonavala and Khandala, only a couple of hours south and east of Mumbai. I was surprised at how soon out of the city we were seeing the mountains rise up before us, and even though we took a baby rest stop, we arrived at our hill station retreat in good time.

The only sad thing about this trip was the shame we brought on our family and probably on all westerners by letting Grandma sit in the back of the car with the baggage, a very disrespectful arrangement in the eyes of Indians. Tom would have been very happy to sit there instead, in one of the  side-facing jump seats, but then I’d have had to take the front seat and witness the constant near-death vehicle interactions, and he would not have been able to help the driver with directions. On the bench in the middle it was most convenient that Wilson in his car seat be next to his mother, and in the back I had lots of room to stretch my legs. I could see the scenery and the motorcycle riders and buses and all behind us — much more relaxing.

But at the hotel, every time we drove on to the property, the guards had to open the back door to check for stowaways or bombs or something, and they were embarrassed and/or amused to have to follow protocol when they could see the “auntie” through the window. 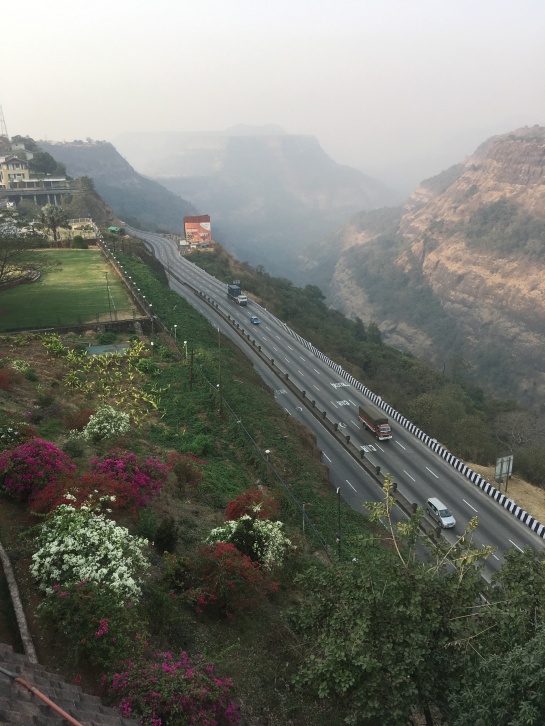 Our hotel sat above the Mumbai-Pune expressway. Mumbai is huge, of course, and Pune is the seventh largest city in India, so it’s not surprising that the smog from both of them extends to the mountains. We don’t know what the AQI index might be up there, but in any case it made our viewing of the mountain vistas a bit sad. Tom says that the air could easily be cleaned up in less than 20 years — look what Beijing did! — so I tried to imagine clearer vistas for coming generations.

The British established these hill stations in the mountains all over India as places to get away for a while from the worst heat, so they have had a couple of centuries to develop into towns where people still go for holidays. Our “twin” hill stations lie in the Sahyadri ranges of the Western Ghat mountains. 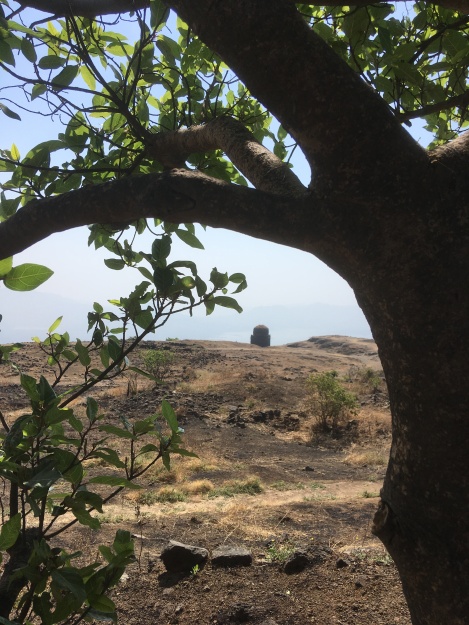 Our only full day  was Saturday, and we chose our destination from among several possible outings: Lohagad Fort on top of a hill, built by the locals in the 16th or 17th century as a fortification against the Moguls, who were able to take and control it for only five years.

We drove a half hour or more up the mountain to the starting point, and from the parking lot Kate and I first walked to the one washroom in that village that is for tourists. It was in a stable attached to a house, where two cows and a dog with puppies were housed. While I waited my turn I admired one animal at close range for a few moments before I turned to see a woman looking at me from the doorstep of her kitchen. We smiled at each other, and I said, “Beautiful cow!” She went back into the house and I could hear her exclaiming something that sounded like “Chri-tien!” I could only guess that she had seen the cross around my neck. Maybe she was a Christian, too?

The woman in the photo below was selling snacks to people as they set out climbing steps, and though we weren’t buying anything she smiled at little Raj in his sling. The brown pods are tamarind.

What a good hike we had then! Kate and Tom each carried small backpacks, and they took turns carrying Raj in the Baby K’tan sling. It takes about 200 steps to reach the gate of the fort, but if you want to go all the way to the top, it is more than 300, maybe even 500 steps. No official information is to be had, and reviewers give all kinds of hearsay information. No one claims to have counted the steps. We didn’t either, being too busy enjoying the views and our fellow hikers, Indians who love to have their pictures taken with westerners. We obliged several times, and enjoyed telling everyone that our baby was just one month old. 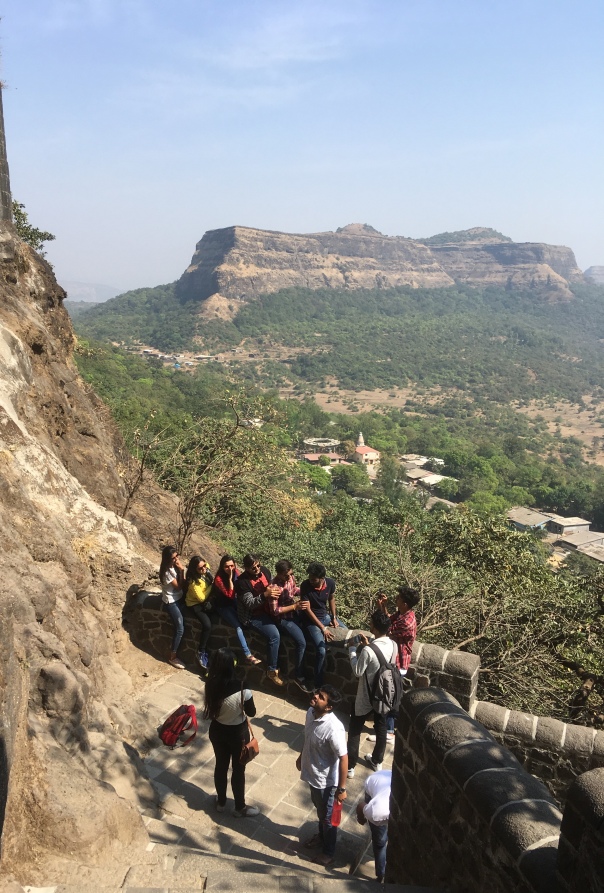 Monkeys live there at the fort. We watched quite a few of them just playing in the trees, but most of the creatures were carefully scanning the groups of people going up and down to see if there were any snacks available. They particularly love soda pop and will grab a bottle out of your hands. Kate and Tom knew this and in the past she’d found herself wrestling with a monkey over her drink at another tourist spot in India. So we kept what little we had hidden away. 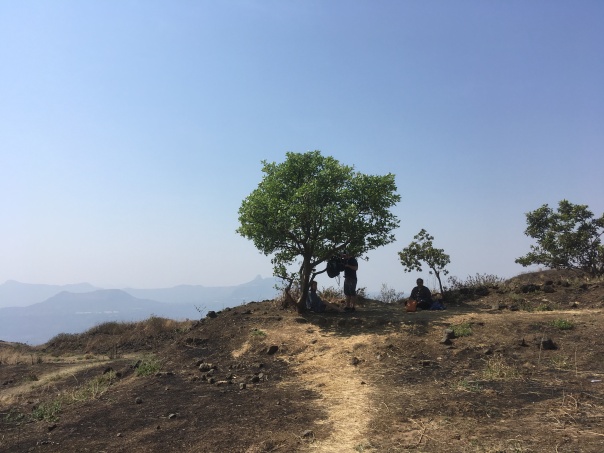 When we reached the top of the fort we kept going, almost to the top of the hill, and found shade under a tree where Raj could have his lunch in peace. An Indian lady came and sat with us for a while, waiting for her husband to come back from the pinnacle. And then we went up there, too, for another perspective on Pawana Lake down below.

I can imagine how lovely it all must be when the monsoons turn everything lush and green. The air quality is better then, too. Kate and Tom want to return.

I took the above picture trying to catch the situation with the men giving food to the dogs who also hung around the area. Monkeys were climbing on the walls and peering down from various places trying to get in on the deal.

We took about 2 1/2 hours in all, slowly climbing all those stairs, walking and sitting around at the top, me taking pictures of flowers, and then slowly descending the often steep steps on our increasingly wobbly legs. Tom took this picture looking down as we were on our way:

When we got back to the car, only then did we buy something to drink in the safety of our vehicle, and we drove down the bumpy road to our hotel.

The town of Lonavala is about 2,000 ft. elevation, high enough to be a little cooler than Mumbai, especially at night. It really was very pleasant in the day, too. They are famous for their chikki, a yummy kind of praline made with jaggery, and every third shop along the narrow streets of town seemed to have a big CHIKKI sign above it. I bought an assortment including Rose, but didn’t open it until we got home. 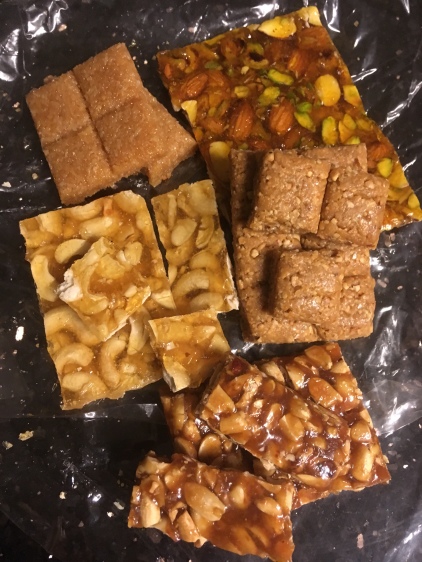 Breakfast at the hotel was a stupendous affair. Evidently you must offer breakfast items of every possible sort to please tourists from various cultures with their traditions and dietary rules. That means the full English breakfast of bacon, sausage, omelettes, roasted tomatoes, toast, beans… (I didn’t see any mushrooms, though!) And plenty of vegetarian items: mixed vegetables, potatoes, dal, coconut chutney….

The mostly self-serve area was so huge, I didn’t even see (or need) the place with fruit, cereal and doughnuts, and I didn’t have a dosa made for me, but I ate bites from Kate’s and from Tom’s. Tom’s was a cheese dosa, so light it could be served upright as a cone. And the omelette that was started cooking before my eyes was the most elegant and perfect rendition I have ever eaten.

One more thing we did in the mountains was visit Lion’s Point lookout/overview, a large and rocky parking lot on the side of the mountain not requiring any physical exertion to get to, and providing plenty of photo opportunities for the humans, and soda-stealing opportunities for the monkeys. There were shaded areas with chairs if you wanted to stay a while. We bought some ice cream and kulfi, and showed off Raj.

On the road up to Lion’s Point and down, our driver had to shift gears constantly to maneuver the frequent and steep hairpin turns. High rock walls lined the road through neighborhoods where you could see the occasional cheerful bungalow or villa on the other side, with lots of tall trees and vines spreading their shade and flowers beyond the walls to the road. I could imagine some British colonial writer like Rumer Godden living in one of these places a hundred years ago.

Lower down I had glimpsed an occasional farm near the highway, and on the way back we were on the lookout for one so that the driver could stop, and I would take a picture. But as it turned out, they were much farther down, where the road becomes a freeway with few exits and no shoulder at all.

We returned to Mumbai quite content and with stiffening muscles from our intense stair-climbing. Everyone thought it had been a great first road trip, first hike, first expedition out of Mumbai for little Raj. He had been pretty happy the whole time, often on one or another of our laps as in this picture.

He seemed glad to be home, too, and to just lie on his play mat listening to the familiar white noises and to feel the lack of vibrations and jerks he’d been introduced to lately.

Huckleberry Cat was very curious and no doubt relieved that we were back. I wonder though if he was surprised that we all returned. Perhaps he had hoped that the small strange creature would not. For some reason Huckleberry attached himself to me as never before and sat on my lap for long sessions of nuzzling and snuggling. When I tired of that, he jumped up on the desk to sit by me while I typed. He “talked” to me a lot all evening, but what was he saying? I told him that Raj is here to stay, but I didn’t break the news about my own coming departure. He will discover that soon enough.

In the meantime, I wonder if he could somehow help me to squeeze the overflowings of my mind into a few more coherent posts about India?

8 thoughts on “A hill fort and a holiday.”