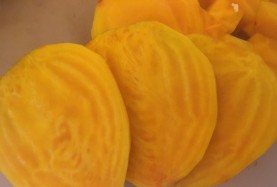 It was a mildly wild evening with eight kids scampering upstairs and down around my house, playing the piano, building with Legos, occasionally squealing, being happy and good. They weren’t my grandchildren, but most of two young families from church who blessed me by coming to eat my soup.

Recently I had received cabbage and beets in my farm box, it being the season for such vegetables. Ah, borscht! Then I ate the red beets beforehand, and my borscht was made with golden beets, so it was not so exciting visually. But it was beefy and really yummy.

There was more of it than I could eat, and the obvious solution to that problem is dinner guests. I invited one family of seven to start with, but the afternoon of The Event, my goddaughter Mary’s siblings (we’ll call them Family B) were being cared for at Family of Seven’s house (call them Family W), and Mother B and Mary got held up and couldn’t retrieve them when planned; I drove 20 minutes and brought them to my house (Mom W’s car couldn’t fit any more bodies) so that they could eat with us and we could proceed as planned.

The dads B and A were nearby, too, one having arrived by train in the neighborhood – and somehow all three vehicles and two dads arrived at my house at 5:00, and we soon gathered around two tables for our soup and bread. I’ve been wanting to get to know Family W better, and it worked so well for their children to have B children around for their first visit to my house.

It occurred to me a little late, when I was halfway up the highway to do my part in the ferrying, that I could have just taken my soup to their house, and it would have been much easier for everyone. But not as much fun for me. In many ways, soup is useful and satisfying.

6 thoughts on “Beets in the farm box led to this!”