Only a few days ago I read, hastily as it turns out, a post on Fraise that got my attention because of what Mags wrote about Albert Camus:

Sartre accused Camus of expelling Christ from the front door of the house, only to let him in at the back. I think this sums up Camus’ respect for people of faith. But then Camus just respects all people, all the time, with all love and compassion. He certainly captures all the stages of illness and its accompanying fear that we’re experiencing now.

I don’t think I’d read any Camus since college, and maybe all I’d read was in high school French class, in French, which would mean I’d understood little at any level. But this made me want to read Camus for real. I continued in her post to read about Cyrano, and until this morning forgot that she was mentioning Camus because she had recently re-read his novel The Plague (La Peste – she read it in French.) Mostly what I retained was the phrase “love and compassion.”

Soon afterward I saw on Rod Dreher’s blog that he is hosting a sort of book club to read The Plague! So naturally I hopped on. I’ve been listening to the audio version while I wait for a used paperback to arrive. Dreher hopes to complete his website discussion within two weeks, so I may have to read everyone’s comments on his page later. I know I won’t go that fast. I have to work this book into my other Lenten reading, which is an unusual compendium this year! 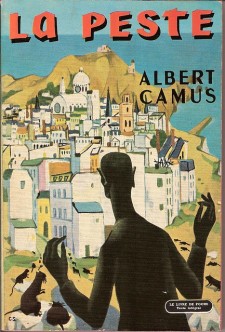 I ran into my dear homeschooling friend Debbie in the store and told her I was starting The Plague; she laughed her delightful laugh and said, “Oh, Gretchen, you are reading that right now??”

Well, why not get some perspective on the current news? It has been very thought-provoking already, not far into the story, to compare the world today to that in which the story’s characters live and move. Camus in the first pages uses the word “modern” several times in describing them, and makes me curious to see how their story develops, and how their response to their epidemic might compare to that of us who are called “post-modern.”

One of the things that occurred to me immediately is something very much from the surface of the story, that our current “plague” is much nicer than the one whose graphically described, horrific symptoms spread through the town of Oran. I was a little worried about listening too close to bedtime, to the account of the rats coming into the streets to die their bloody deaths.

Please comment, if any of you have thought about this novel or have read it recently. (If you  have, you probably want to visit Dreher’s blog to see what goes on there.) I already noticed a few lines that I’d like to muse on when I have the print copy and can look longer at them. But until then, here is an idea I’ve thought about for a long time, but didn’t remember that the quote was from Albert Camus:

“Fiction is the lie through which we tell the truth.”

5 thoughts on “Truth in a story of plague.”