It’s surprising how much glory has bloomed and gone, in my garden and by the creek. Well before the end of July we’ve cut back the purple explosion of germander and forced the bees to move to the echium and salvias, which continue to branch out and lengthen their nectar offerings. The Jerusalem sage and lavender I always think of as long-lasting…. How can they be done? Santa Barbara daisies at least come again and again after each shearing.

By the creek, the Queen Anne’s Lace and fennel will continue for months more, and other insects feed on them. But I never see honeybees there.

Early on when the gyms first closed because of the covid-19 quarantine and more people were walking those creek paths, I saw that many of the fennel plants down there had been mutilated and dishonored. I wished I had clippers with me so I could cut them off neatly to relieve the humiliation.

But three months later, those same plants are most beautiful! For all they cared, the breakage of their stems might have been expert pruning by loving horticulturists. Now those specimens have branched out gracefully to outshine their fellows that shoot straight up. The ladybug above is posing on one.

Last fall I planted a few begonias in pots on the patio, but so far only this older one has opened: 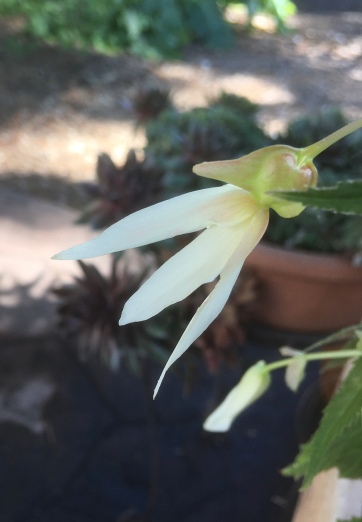 In the vegetable boxes many of the things I planted rather late and experimentally did not even sprout, but currently collards are coming along. And in the greenhouse, moringa! I bought the seeds two years ago at an event I blogged about: here. (I also had a bunch of little amaranth plants from that source growing nicely, but something ate them off at the stem.) 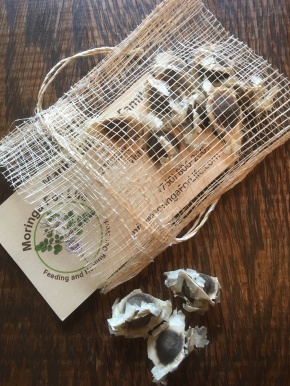 This spring I managed to keep three of the seeds warm and moist long enough for one of them to sprout. If the seeds had not been so unusual, I might not have invested in the project, but who knows… and whether I will ever use it, no one can predict that, either!

I plan to grow my little tree in a pot, and then a bigger pot if I manage to keep it alive long enough for it to outgrow containers. The leaves can be used like spinach, or for tea. It’s supposed to be one of those “superfoods,” which I’ve noticed become fads and then after a while you don’t hear about them anymore. I’m more interested in this species because it’s not a sweet fruit to add to the carb load of a diet.

My fruit trees are looking good. The plums and fig got their solstice pruning to keep the size down. For the fig, that mostly meant taking a foot or two off the top. I’m keeping them at a size where I can pick the fruit without a ladder, and take care of the trees on my own. The fig tends to grow horizontally, which makes it easy for me; it’s a dwarf species also, called Blackjack. But it doesn’t seem particularly dwarfish in its fifth season of bearing! It’s loaded with fruit. Yum. 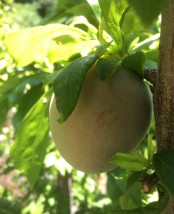 I have four Elephant Heart plums on my two trees, which this morning I thought I better take pictures of, because in previous years they have not only started out few but mostly disappeared. My lemon tree I have in the last year or so been more diligent than ever to feed regularly, and it has responded by producing a score at least of little lemons that are getting big fast. They will be ripe next winter.

Must leave you now and go see what else needs pruning!

9 thoughts on “What any kind of pruning can do.”