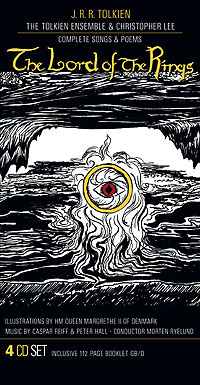 On my last night with my family in Colorado, I took a turn along with their parents to read aloud to the children a chapter of The Hobbit. They had all been enjoying the book together before Christmas visitors and pastimes interrupted their usual routine, and the chapter we read that night took us suspensefully close to the end of the tale.

What a joy it was to read more of J.R.R. Tolkien’s sublime storytelling; I was uncommonly grateful to be a narrator of his prose, and by that means to take part in the culturally lifesaving work of telling good and true — and fun! — stories.

Since then I have been hoping to post something related on Tolkien’s birthday, but I almost missed it again — it is today! Instead of trying to come up with something new, I am re-posting this article that I wrote a few years ago about the Tolkien Ensemble:

I feel a bit foolish, having written in my last book review that I had been put off from “all things Danish.” The fact is, I was that very week exulting in what I had forgotten was a Danish phenomenon, the Tolkien Ensemble and their achievement of composing and performing music for all of the songs in The Lord of the Rings trilogy.

It was a blog discussion of poetry that alerted me to the existence of this group, founded in 1995, and their recordings on four CD’s. I’m surprised that I never heard of them in the last fifteen years. As a mom reading the trilogy aloud to my children 25 years ago, I vaguely remember feeling inadequate when we came to one of the many songs in the novels. Tolkien’s verse has meter, and the poetry is affecting, but they are songs to the hobbits and other characters, and one longs to really sing them. I am not good at composing tunes on the spot; I wonder if Tolkien hummed appropriate melodies as he was writing? [Update: evidently he did!]

A 4-CD set was compiled after all of the recordings had been made over several years. There seem to be slight variations in the different editions and collections, but I have all four CD’s now, totaling 69 tracks, which I bought separately and mostly used. I’ve listened to some of songs many times, and I continue to be amazed at the quality of the music, and how each song is fitted with a composition that seems to me to be just right for it. I admit to being an amateur music critic, but I’m going to plow on ahead. If any of my readers are familiar with these recordings and know more about the field of music, maybe you can further instruct or correct me, or just tell me what are your favorite songs.

Caspar Reiff, one of the composers, founded the Tolkien Ensemble in Copenhagen when he was in his late 20’s and studying guitar at the Royal Danish Academy of Music. His former guitar teacher and “multi-musician” Peter Hall joined as co-composer, along with fellow students from the music academy. They are a convincing advertisement for that school.

The Ensemble manages to create a fitting expression for every mood and activity that was put to verse in these books. The song of “Tinúviel” captures the urgency and enchantment of Beren who falls in love with an Elven maid and chases her through the forest and the seasons, calling achingly, “Tinúviel! Tinúviel!” until she in turn falls under his spell, and in her eyes “The trembling starlight of the skies/He saw there mirrored shimmering.” The drinking song Frodo sings at the Inn of Bree is a lot of fun, with accordion and fiddle, spoons and dishes. There are riddles, laments, and even a bath song. We have a hearty upbeat walking song as the few Hobbits are starting out bravely:

Farewell we call to hearth and hall!
Though wind may blow and rain may fall,
We must away ere break of day
Far over the wood and mountain tall.
To Rivendell, where Elves yet dwell
In glades beneath the misty fell,
Through moor and waste we ride in haste,
And whither then we cannot tell.

With foes ahead, behind us dread,
Beneath the sky shall be our bed,
Until at last our toil be passed,
Our journey done, our errand sped.

Contrast this with Frodo’s more melancholy mood when he sings alone the song he learned from Bilbo. Update: “Old Walking Song”  It seems like the theme song for the entire tale:

The road goes ever on and on
Down from the door where it began.
Now far ahead the road has gone,
And I must follow, if I can,
Pursuing it with weary feet,
Until it joins some larger way,
Where many paths and errands meet,
And whither then? I cannot say.

Many of the songs are sad. The whole story is rather bleak, of course, with the growing and unrelenting awareness that the former glory of kings and elves is fading fast and can’t be regained. The unhurried drama enacted in a lumbering musical conversation between the separated Ents and Entwives is heartbreaking, but it is one of my favorites.

They call to one another in their stately Ent voices that convey their tree-like, large physiques and great age. The Ent sings stanzas in a beautiful but heavy tone, with the refrain, “Come back to me,” and she replies, “I’ll linger here,” until the last verses when he says he will come to her, and then they sing in unison of a time when they will converge on a journey to where their hearts may be at rest.

The Elf Legolas sings a “Song of the Sea” that I didn’t like at first, I think because it put me off balance, as though I were on a ship being buffeted by the waves. But after a few times through, I got my sea legs and began to enjoy the feeling of the moist wind in my hair, and the sense of adventure.

The women of The Tolkien Ensemble have lovely voices that one imagines might be heard among those “misty glades” where Elves dwell and sing. They use them to good effect in several tracks about the lands and heroes of these wise and ageless creatures.

What might be called a Thinking Song, “Bilbo’s Song,” is one that he sings meditatively. The guitar accompaniment reminds me very much of the way my own mind can go round and round on a subject, ruminating. The strings are plucked in a quick and repetitive rhythm, perhaps with a drone note coming back frequently.

I sit beside the fire and think
of all that I have seen
of meadow-flowers and butterflies
in summers that have been;

Of yellow leaves and gossamer
in autumns that there were,
with morning mist and silver sun
and wind upon my hair.

I sit beside the fire and think
of how the world will be
when winter comes without a spring
that I shall ever see.

For still there are so many things
that I have never seen:
in every wood in every spring
there is a different green.

I sit beside the fire and think
of people long ago
and people who will see a world
that I shall never know.

But all the while I sit and think
of times there were before,
I listen for returning feet
and voices at the door.

At right is the cover of the set of two disks I first bought, to find out if even liked them. It’s hard to find samples of the music online; you might pull up one or two on YouTube, and then you might find them taken down the next minute. If bought separately, the disks in order of production are:

But don’t worry – not all the action takes place in Rivendell. Those are just the disk titles, and the songs included on each disk are not necessarily in an obvious order, either.

I immediately found so much to love in those first two collections that I shopped sources for the other two disks. And after listening for a day or two, it was clear: I must read the trilogy again to put the newly appreciated songs in their context. That had been my desire after watching Peter Jackson’s film interpretation that was so disappointing, but I hadn’t followed through. So I dropped all my other Currently Reading books to read The Fellowship of the Ring. Now I am on to The Two Towers, still in the Company!

When I am listening to the recordings, and now reading the novel again, I often think about those days when I had my children gathered around me and we were all vicariously traveling across the mountains and wastes of Middle Earth. If it had been only ten years later, we could have paused at each song as it appeared in the story to play the companion track on a CD, and let the music sink into our consciousness and draw us deeper into the story. That kind of enrichment would have raised the quality of our literary immersion a notch, to be sure. The Tolkien Ensemble gave their final concert in 2008, but I’m confident that the fruits of their project will continue to give joy to Tolkien-lovers for a long time.

Update: At the time of the original posting of my music review, I couldn’t find any samples of the music to share, but just now I found the songs compiled on YouTube. Now you can listen for yourselves!