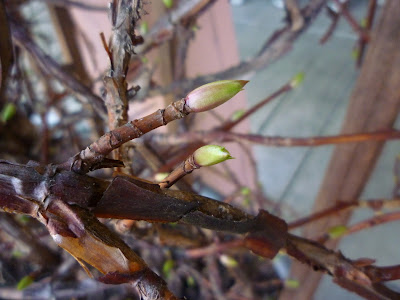 The only task I was determined to complete today was a shopping trip to a grocery store in the next town. The establishment is combination of neighborhood grocery, natural food store, and international market, and the kind of store I go into with a list of five items (like today) and after exploring and discovering up and down the aisles I leave with two big bags full of good finds. Oh, they also have a gift shop in one corner! I could spend an hour right there, browsing for the gift I wish I’d been diligent to make myself. 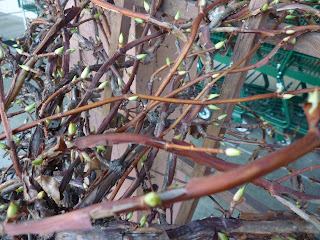 As I wheeled my cart in the door I was already fairly elated, having just encountered the budding vine outside — and that was after I had brilliantly noticed the jewelry store next door and got my watch battery replaced. I’d been carrying it around in my purse for a couple of months — surprising how much lighter I felt, getting it back on my wrist instead.

Maybe I was so smart, and elated, partly because of all the caffeine I’d been imbibing on my morning off from the gym. Besides the shopping trip, I did have in the back of my mind the idea of thoroughly vacuuming several rooms in the house. The day’s not over, so who can tell…. 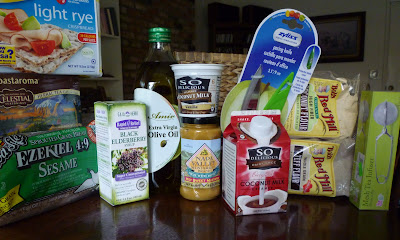 My favorite place to shop carries items that I can’t get any longer at Trader Joe’s (Ezekiel 4:9 bread) or other grocery stores (Roastaroma tea) and some standard items at great discount (obscure brands of olive oil). And, I admit, some just plain weird things.

I often get bogged down in the kitchen aisle, looking at cute European utensils including my downfall, knives. This time I paid $2 for the tea strainer to replace our old one that is all mangled and rusty.

I had even been sharp enough to remember to bring in my reusable shopping bags. It does seem to me that the checkers at this store are a little less warm when I don’t. It all comes of living in the kind of place where people take their Wine Country Vacations.

Another thing I like about my market is that they never have tacky holiday displays. Today I didn’t notice the window until I had loaded my bags and was back in my car. So I got out again to mark the advent of spring behind the cigarettes. Happy March! 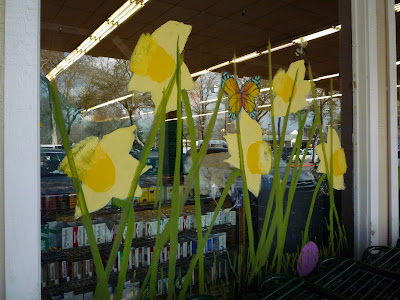 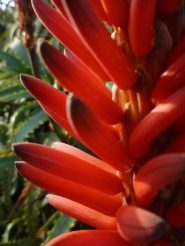 California’s Central Coast was our vacation spot last weekend. We spent time with Soldier and Doll and with our friends whom I will nickname Mr. and Mrs. Bread. Their friendship is so nourishing on many levels, body and soul, that it demonstrates just how crucial phileo is to us humans.

Loaves of grain are humble and plain in a way, but throughout history people have often lived by this kind of food and little else. Thank God for friends who also lavish us with agape, ministering to us of the One who is our Bread of Life.

All six of us had a refreshing walk along the shore in Pacific Grove, where we saw the oldest active lighthouse on the West Coast. The light on Point Piños has never missed a night since 1855.

Mr. Bread played his mandolin as we strolled along under blue skies that reflected in the ocean, and we shared our discoveries of egrets and flowers and succulents. Doll found a rare black abalone shell, which was actually a beautiful blue-green. Some red-flowering aloes had long ago been planted along the path and grown into giant clumps. 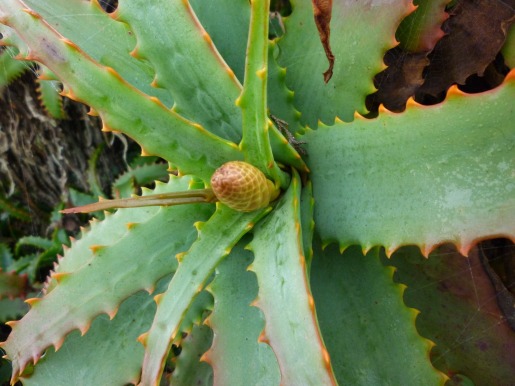 We ate our picnic lunch in the courtyard of one of the many historic buildings in Monterey. This city was the capital of California under Spain and Mexico, not long after it was founded in 1700.I always enjoy visiting gardens that I have no responsibility to care for, especially if they are modeled on the historic, as was this one above. But I didn’t get to examine everything in great depth. I was always falling behind the group when trying to get the perfect picture of an aloe flower or a grove of cypresses.

A good vacation, especially at our age, must include physical rest. We had a that in good measure, being lulled and comforted by hearing the waves crashing on the rocks below our bedroom window. And watching the waves — I think I would never get tired of it. It seems healthy to have in one’s field of vision the things that are obviously not man-made; compare that to a busy city with traffic, stores and offices. The ocean stretching away as far as I can see, or the stars and constellations that glittered above us all weekend, fill my conscious mind with the reminder that there is Something Bigger Than I Am going on here. And it’s been going on longer than men have been remembering.

Today I was lucky to be able to stay home and rest mentally from the excitement of traveling. This quiet day, combined with the nurturing gifts I received on the weekend, have given me some energy to get out of my January slump –just in time to look up with some hope at what February has to offer.

Before the summer is past, I want to share a true story I wrote more than ten years ago, when it appears I was already developing my habit of complaining about my garden, and trying to break the habit, too.

SURPRISE CUCUMBERS
This spring I was grumbling more than ever about the less-than-ideal gardening conditions I work in. Here, close to the San Francisco Bay, it never gets hot enough for this lady born and raised in the San Joaquin Valley of California, where most of the fruits and vegetables all of you eat are grown, where tomatoes and melons and peppers and eggplant all thrive. Rather, we have fog many mornings in the summer, and a few hours after that burns off the cool afternoon breeze comes through, followed by the fog again. I wear flannel nightgowns all summer.
Our back yard doesn’t have a lot of space, and half of it is shaded by our trees and the neighbors’, which get bigger every year. My bean and zucchini crops shrink annually. But in spite of my discouragement, I planted again in April. I have had nice lemon cucumbers in the past, so I planted some again in the usual place. Well, not quite usual. Whereas in the past the vines could crawl across the concrete patio, now they would have a big sandy square where my husband had jack-hammered out the old cracked pavement with plans to replace it eventually.
Before my cukes poked up out of the ground where I had poked the seeds in, big round leaves sprouted up in a few places in the sandy square. They were not the true leaves yet, but I could recognize them for cucumbers—oh, goody, I thought, some volunteers! And I carefully sculpted some bowls around my “hills” so I could water them efficiently. You know, it doesn’t normally rain in most of California in the summer so we have to irrigate everything.
The expected cucumbers came up, too, though not so many. I was glad for the “drop-ins” and was happy to see the space filling with healthy green foliage and vines running off in every direction. Along about July I walked by my sprawling cuke bed and saw…..what was that?…a watermelon!
I could not have been more stunned; to think that I had not recognized their distinctive leaves, so different from the cucumbers growing close by. But there is the power of a foregone conclusion: I had never really looked at those leaves. I simply knew they were cucumbers. But when I thought back, I remembered that the previous year we had enjoyed watermelon on the Fourth of July with friends, and the many children had sat on the  edge of the deck spitting seeds into the sand.
So now what was I to do? There was no real likelihood that watermelons could get sweet here in the Land of Fog and Shade. I have grown melons before in another place. I know they need months and months of heat, Real Heat. But I had been nurturing these plants for months, and they were so healthy and green…and our water use isn’t metered! It was not possible to turn my back on these babies, so I kept watering them, and sheepishly telling visitors about my confusion and enlightenment, as we gazed at the multiplying fruits, some of which grew large.
August was cool. My children asked me many times, “When are we going to pick our watermelons?” and I told them I would wait as long as possible, until the season of possible heat waves had surely passed…just in case. But I didn’t wait that long. I thought I would try one per week, and I started on Labor Day, the First of September. We picked a big melon, and weighed it: 25 pounds. We hacked it open and it was pink inside. I tasted a slice. It was juicy, it was SWEET. A miracle, but true. Better than what we have often bought at the store. Our neighbor heard us exclaiming and peeked over the fence, so we gave her one. We picked a third (32 pounds) to share with our married children, and found out today that it is sweet, too.
Now the children are saving seeds and hoping that Papa will not replace that concrete just yet. And I am smiling to myself at God’s sneaky kindness, giving me in the midst of my grumblings, of all things—watermelons! 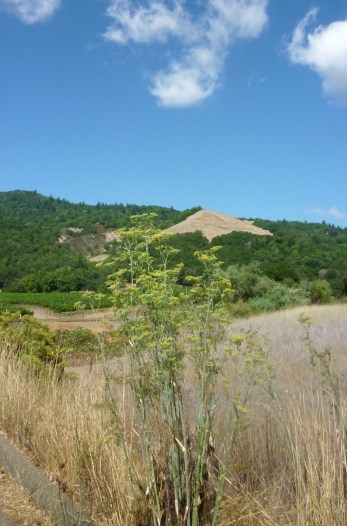 This afternoon I “had to” run an errand to my stomping grounds of yesteryear. It turned out to be a surprise gift, to drive home on the narrow roads winding through foothills where the sweetness of oak trees filled the warm air. Dark grapes were hanging close to the ground in the vineyards, soaking up the last of the sweetening rays. And wild fennel way higher than my head lined the roadsides.

All these scents and more combined over the half hour’s drive in ever-changing proportions to create a soul’s real comfort food. I had only recently been grieving the loss of a nice garden, breadmaking, my wits, and several other things I couldn’t even put my finger on. Today it was as if God through the instrument of Summer put His arms around me and said, “It’s o.k., Honey, the best parts of your Life That is Past remain, and will be here for you in the future.” And Summer was telling me that she is going to sit a spell yet and likely give me a few more hugs. 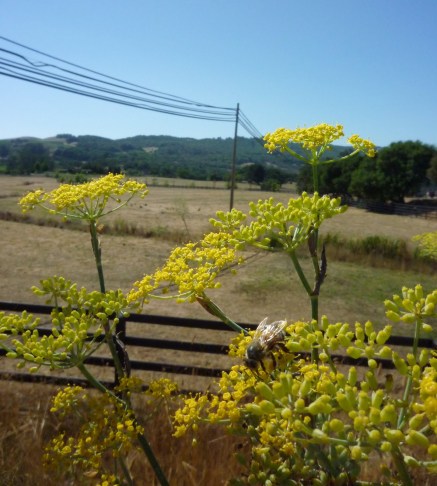