“If life always went well, would we not become so attached to our present state, even though we know it will not last, and by deception become enslaved to pleasure? In the end we would think that our present life is the best and noblest, and forget that, being made in the image of God, we are destined for higher things.”

-St. Maximus the Confessor, On The Cosmic Mystery of Jesus Christ

“Maximus the Confessor (580–662) lived, historically and to some extent geographically, betwixt and between. Historically, he lived in the indefinite transition between ‘early’ and ‘medieval’ Christianity: after the downfall of the Western Roman Empire and the zenith of the Byzantine Christian Empire under Justinian, but before the schism of Byzantine and Roman Churches had reached the point of no return; after the crucial Councils of Nicea (325), Constantinople (381), and Chalcedon (451), but before the age of the Ecumenical Councils had ended; after the most creative epoch in patristic thought, stretching from Origen to the Cappadocian Fathers and Augustine, but before the tendency toward theological scholasticism East or West had fully gained momentum.”

-Fr. John Behr, Editor of On the Cosmic Mystery of Jesus Christ

I very much enjoyed this video interview with a St. Maximus scholar, Fr. Maximos Constas: “The Relevance of St. Maximus Today.” And you can read more about St. Maximus HERE. Today we commemorate the translation of his relics, and sing this hymn:

Champion of Orthodoxy, teacher of purity and of true worship,
enlightener of the universe and adornment of hierarchs:
All-wise father Maximus, your teachings have gleamed with light upon all things.
Intercede before Christ God to save our souls. 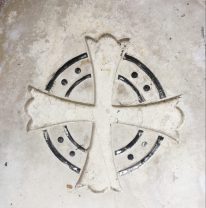