This summer my strawberry tree got my attention as never before, for a couple of reasons. First, there was lots of fruit. This is probably because of the wet spring we had, and because the tree is bigger than ever, and has been pruned twice in the last few years.

When I was popping the “berries” into my mouth I noticed that some of them were damaged, or that they were inhabited by other hungry creatures. That began my months-long more intensive engagement with my tree.

Let me tell you why I love this tree so much:

1) My husband and I planted our Arbutus unedo together, perhaps 15 years ago, so it’s got history with me. 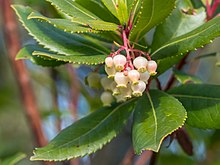 2) It grows and grows without demanding any attention; it’s drought-tolerant, shade-tolerant and frost-resistant.

3) Even without its fruit it’s a handsome tree, but its blossoms and fruit add to that beauty over a long period.

4) The fruit is yummy and bears over a long period in late summer and fall, and the birds don’t seem to eat it.

Below, those are pine needles from the tree above, hanging like tinsel all over my tree. 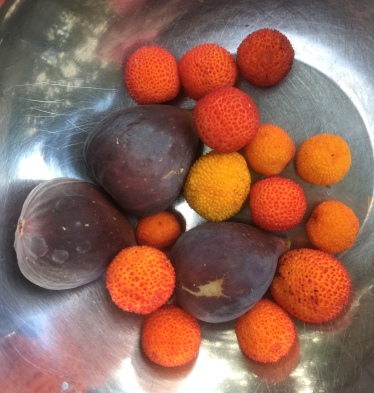 The Strawberry Tree is native to the Mediterranean region, and also western Europe and southern Ireland. Here in California it’s grown a lot as an ornamental and usually the people who are familiar with it as a good landscape tree are surprised that I like to actually eat the fruit. Even the volunteers at the nearest Master Gardener help desk were surprised. I regretted that when I took in a few inedible fruits for their scrutiny I hadn’t brought a bunch of prime examples for snacks as well. 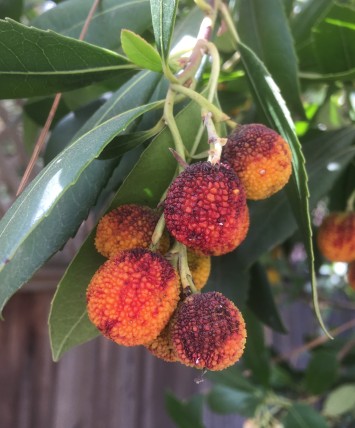 The Master Gardeners thought that the dark mottling of some fruit, which fruit also never ripens but remains hard as it dries up, was likely caused by a watering issue. That seems strange to me, because we had such a wet winter, and late rains, you’d think the tree would still have its roots down deep in the moist earth. But I had given it a long drink even so, before I asked.

They studied and studied my pictures of the worms that were not around anymore for me to bring in as live specimens, but they could not identify them, though a couple of the staff consulted at length their University of California entomology databases. That didn’t surprise me, because if you look online, no one ever mentions one problem with the fruit – all the pests and diseases mentioned affect the leaves or the bark.

We are hoping that these worms will not come back in greater numbers next summer, but if they do, I’ll bring in a live worm for our research. They are icky. I can tell you, they get very excited when you slice their food-house in half, and their writhing about makes them more unlikable.

Let’s switch back to a photo of robust and radiant, healthy fruits. Yum. I think they are best when they are just turning orange, because they are plenty sweet, but still slightly firm. Their flavor then is also brighter than when they red and starting to get soft.

I saw a picture of a crumble cake made with the fruit, in one of the many countries that appreciates them as a food crop, so when I baked a fig and almond cake recently, I added some cut-up fruits. Either they disappeared, or turned blue as did the figs, because there was nothing remotely red or yellow in that cake when we ate it, except the dried apricots.  😦

We haven’t had a frost yet, and I have a feeling I’ll have “berries” to enjoy until we do.