I’m the opposite of bored here in Colorado with my son’s family, but I have had a terrible yawning problem since I arrived ten days ago. It must be the altitude (7300′), which I will blame for the sleepiness that comes over me at times, too.

Today was the least yawny and sleepy. Soldier drove us south a bit to a lower elevation, where we also enjoyed warmer weather while we played around at the Royal Gorge. Maybe everyone has heard about this canyon above which a suspension bridge was built in 1929, 955 feet above the bottom, where the Arkansas River flows along a single railroad track. 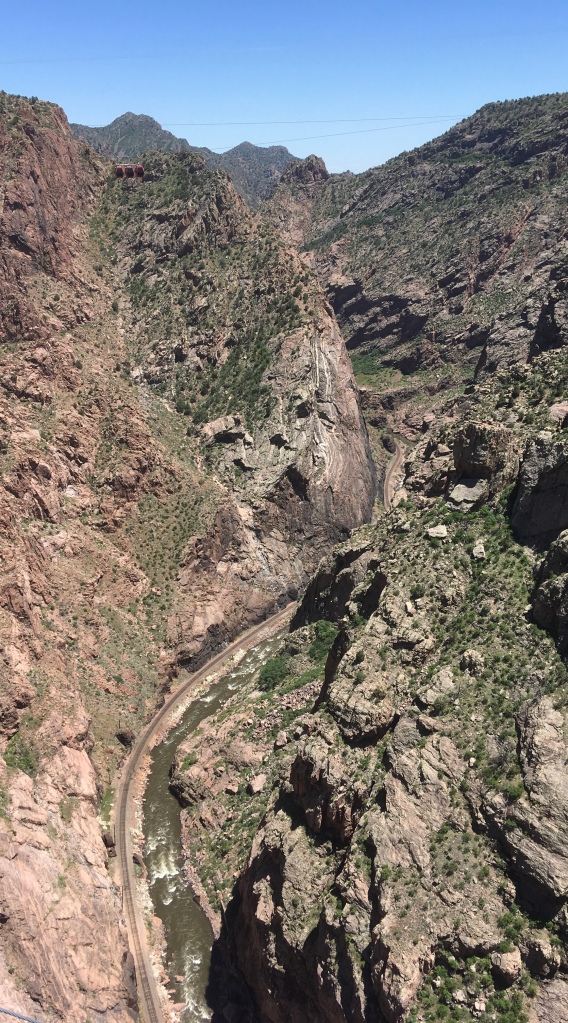 It was another happy chance to identify wildflowers and plants.  I’ve been doing that a lot.

This penstemon called Beardtongue is all over around the Gorge.
Also cholla cactus and prickly pear.

There were a lot of fun things to do at the Royal Gorge park. We all rode the gondola across the gorge, and before walking back across the pedestrian bridge the children played on giant slides and tunnels, and rode the carousel. I took pictures of plants — and grandchildren, of course.

All week I’ve just been hanging around with the tribe doing much of what they do, or merely observing the more rambunctious activities of the boys, and listening to little Clara’s feminine conversation.

The cold and rainy weather has passed. The last of it was the evening we sat bundled up with coats and blankets to watch Liam’s Little League game out on the plains. Now the temps are moving into the high 70’s, and I can get sunburned sitting on the deck so close to the sun.

Many of the wildflowers I’ve identified are scrubby looking sorts with the most diminutive flowers. Also the beautiful blue Royal Penstemon at top, which we discovered just down the path from the karate studio while Liam was in class, along with purple Stemless Point-vetch. Magpies, robins, flickers and Mountain Chickadees flit and sing among the pines and firs and spruces that grow thick in the neighborhood.

Just at the edge of the back yard is a giant clump of White Willow trees where the boys play. Laddie told me about the Bible studies he likes to have with their rabbit stuffie in particular, on a rock in the middle, encircled by more than a dozen trunks arching up and away.

Yesday everyone was digging and planting in hills and boxes, so I gave Brodie one of his birthday presents early: a pair of kids’ work gloves. He wore them all day, long after all the work was done, he loves them so.

A wolf spider with an egg sac was disturbed by the digging and ran away from the squash hills. This evening while I was with Clara under the play structure in the back yard, I saw a Cutworm Wasp digging a hole in the sand that had escaped the sandbox. I decided not to show you the wasp’s unremarkable photo, but will close with the spider, because that sleepiness is coming over me again, and tomorrow is another big day. Happy June!