For a long weekend I returned to the Central Valley (California) territory of my childhood as I had done in May. Both times were for nephews’ weddings, so I was there primarily to be with my family, but I also managed to visit with three dear friends before and after the festivities.

Back in May, I didn’t get to see much of my childhood friend Dick’s garden or groves, but this time I asked for and was given a thorough tour, and I took so many pictures of his vast collection of plants, I will have to scatter them at random around this post and the next. I hung around with my farmer sister Nancy long enough to ask more questions, and hear stories about the trials and adventures of being a farmer in these times. Heat, drought, frost, and the hot pursuit of thieves are a few of them.

As I pulled into Nancy’s driveway I noticed that the Sumo mandarins were whiter than I remembered from May. Have you ever wondered why Sumos are so expensive? It might have something to do with the extra care they need to make it to harvest and on to market. Whitewash is used for several reasons, not least of which is as a sunscreen for the fruit. Whether it helps the leaves to withstand the withering rays, I don’t know. Citrus does like a warm summer, but the one that just ended featured 44 days over 100°, while the average would be 32 days. Some trees baked to death. 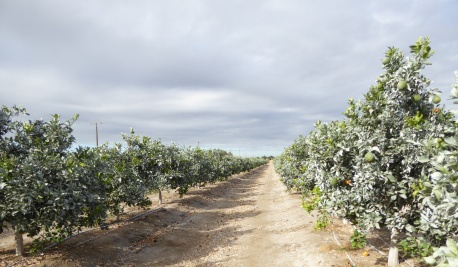 Rain was hoped for last week, even though an outdoor wedding was on the schedule. You can see how the sky was grey with clouds — but storms often come as far south as Fresno, and no further, which was the case again. A few sprinkles did fall as a happy gift at the wedding reception, just enough to feel like a blessing, and to create a rainbow!

One topic of conversation as we sat around in various assortments of kinfolk over the days was the problem of thievery and vandalism in the citrus groves and around the farmers’ houses. People will steal copper irrigation valve fittings worth $2, and the damage requires the farmer to spend $200 in repairs. Next to one of Dick’s groves live some teenagers with nothing better to do than drive their cars into orange trees and stuff rags into pipes. This kind of thing adds up to a cost of $100-200 every month for just that few acres.

Sometimes thieves will spread tarps on the ground under trees in the middle of a large orchard and pick fruit into them; then after dark they come back and haul it off. A woman rides her bicycle down a driveway to see if there might be something to pilfer, and when challenged by the dogs and/or the homeowner she makes up a story about being lost and needing directions. My sister is becoming famous for the many times she has jumped in her car to chase down such interlopers (some in cars) and take their pictures, or tell them to leave the neighborhood, because they aren’t fooling her.

October is the month when the citrus growers can breathe a sigh of relief that the hottest season of the year is past, and they begin to watch the sky for signs of rain. The oranges really need some rain in October if they are going to “size up” — no amount of irrigating will accomplish what atmospheric moisture does.

And in the coldest months the lemons and oranges have to be protected from hard frosts, nowadays usually by wind machines that make a breeze to keep the frigid air from settling on the trees and their ripening fruit. If you are growing one of the ultra-early varieties that now exist, which can be picked as early as October, you might have less to worry about come December and January. 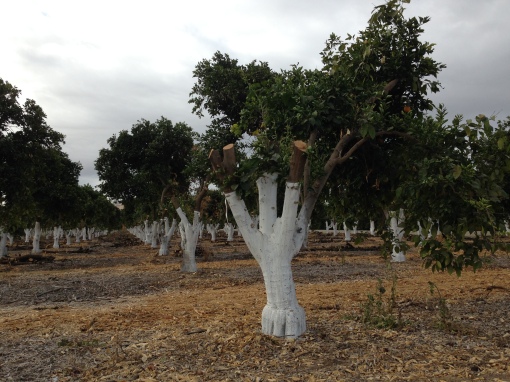 Just down the road from Nancy’s I saw this grafting project the likes of which I don’t remember seeing in all my years living in the citrus orchards and coming back to visit. I wondered what was going on that required such brutal cuts. It’s this: these are mature orange trees that are being changed into lemon trees.  All but one of the major branches have been cut off, and lemon wood was grafted in under the bark. (I wish I had been able to get over the ditch to get a closeup photo.) The one branch carries on photosynthesis while the lemon parts are growing, and eventually that remaining upper part of the orange tree will be pruned off, leaving a lemon tree with an orange rootstock.

I drove past fields of something I didn’t recognize, so I took a picture and texted it to my sister, who told me it is silage for dairy cattle. When I researched it I found out that it is sorghum silage, and uses less water than corn silage. That feature is always a good thing in this thirsty land we live in.

Nearby, alfalfa covered fields with its sweet green blanket; cotton was drying and popping out of its bolls. Cotton is also a plant that can be grown in arid regions such as the Central Valley’s West Side. When I was a child my father grew cotton for a few years.

To complete the report of my fun trip, next time I’ll focus on the specific microclimate of my friend Dick’s place, and the lush gardens three generations have created on a hunk of granite. A lot is still blooming in October, but some of the harvest is just now coming in. 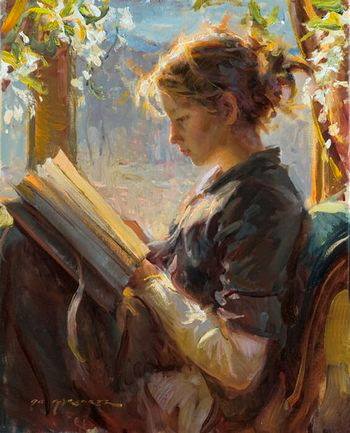