“Bleak Midwinter” might be the title of some news articles of this day, deemed by at least one researcher as the likeliest day of the year for a peak in emotional depression. His formula takes into account failed New Year’s resolutions, the economy, the weather, and I suppose the fact that it is Monday.

Could I be counted in the numbers, because I found it harder to get myself out of bed this morning than I did last Monday? It was on the way to the gym that I heard the “news,” and it made me happy just thinking that the endorphins I was about to produce would help me through this day.

It’s another way of describing bleak midwinter, I thought as I was driving home, and wondered where that phrase came from. It didn’t take long to find out again what I had certainly known in the past, that “In the Bleak Midwinter” is the title of Christina Rossetti’s poem that ends, “What can I give Him? Give Him my heart.”

Yesterday I was told that the human soul is infinitely empty, because it is designed to hold the infinite God in Trinity. For us to become aware of our emptiness and need for God is a good thing, so some amount of what we might call depression could serve us that way. As Oswald Chambers wrote, “Sorrow burns up a great amount of shallowness.”

St. Silouan said that we ought to “keep our minds in hell and despair not.” Don’t forget all there is to grieve over, don’t pretend that the world isn’t lost in sin, but come to Christ with your grief–otherwise you can’t help but despair.

Moving on to things I know more about: the cats in my neighborhood. While we had our own cats, I mostly chased the others away from our yard, but now I have leftover food since Gus died, and it seems right to share it with them. Occasionally I set out some kibble in his old bowl, if it isn’t raining.

The markings on this black and white cat make for an optical illusion that his head is misshapen. At least, I think that’s why he looks so ugly, but I suspect he doesn’t spend much time in front of the mirror fretting about it.

There are at least five cats who pass by on their daily prowl. If I hold very still I can take their pictures, but for the most part they are shy about coming so close to the house when they can see a strange human on the other side of the door. One or another will sometimes make eye contact with me, and then after a few seconds, bolt away as though he got a deadly revelation. 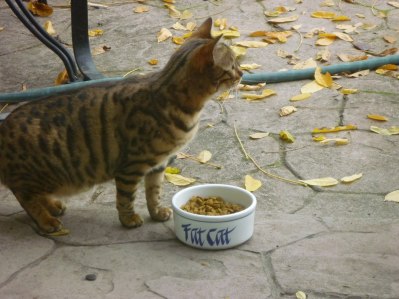 You might recognize the striped cat at left, because I wrote about her already, here , here and here. You’ll have to look back at one of those posts to see her amazing eyes. She doesn’t come around nearly as much as she used to, when she liked to follow Gus and pester him. 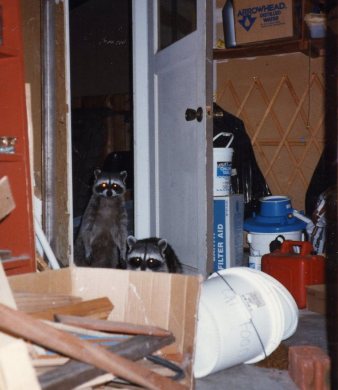 Mr. Glad was startled by a big raccoon on the other side of the glass the other night, gobbling up food I’d forgotten to bring in at dusk. The picture shows what were probably that guy’s ancestors, caught while enjoying the spoils after they tipped over a whole bucket of cat food, many years past.

I think my favorite cat lately is the black one below, because after watching me watch him emptying the bowl, he sat down to just be near me for a spell.

When we humans notice that our cups and bowls are empty, we can simply hold them up to our Lord and He will fill them, as He told us (John 6:51): “I am the living bread which came down from heaven: if any man eat of this bread, he shall live for ever: and the bread that I will give is my flesh, which I will give for the life of the world.”