My father bought 30 acres of land with oranges and lemons growing on it, and no house. There was a large oak tree looming above a spot where a house might have stood in the past. And he thought that the tree was pretty much grown up, so he planted a house nearby.

This is the oak under which I lived after we moved in, until I went away to college about twelve years later. Only twelve years? Those formative years have an impact far beyond their numerical value, and that tree has to be my favorite tree, because there hasn’t been a particular beloved tree between then and now that I can bring to mind.  I realized that this week when Elizabeth was telling about her favorite trees and I wondered if I had one.

In these first pictures, taken decades after I had married, the tree had recently been trimmed with great care and patience by a tree man who was in love with it. I was amazed at its beauty and took a lot of pictures.

At that point the oak had grown mightier than my father ever expected, and its limbs were leaning dangerously over the house. My father said that if he had known how big it would get, he wouldn’t have built the house so close to it. At least one large limb had to be cut off to protect the house, and the whole tree was refreshed and lightened by being pruned all over.

When I was growing up I only knew that it was an oak tree. If someone told me it was a Valley Oak I didn’t remember. People in our family rarely talked about the birds and trees in those days. I didn’t know those were mourning doves I used to hear every evening as I was lying in my bunk. But one year a flock of bright orioles lived in our tree for a few weeks and we heard some talk then. 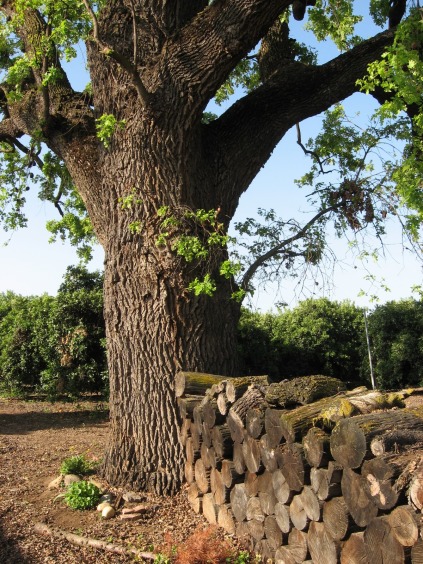 When I used to play under the tree, this is the way I mostly saw it, as a thick trunk. There was no reason to look up into the branches, excepting the times when orioles visited, and it was usually so messy up there that some twigs or dirt or even tree frogs might fall in your face.

Yes, more than once we had veritable plagues of tiny tree frogs swarming in the branches, on the trunk, hopping all over the ground under the leaves. When we walked under the tree they jumped onto our legs as though they were little trunks.

And our tree suffered many times from all varieties of galls, the most common of which we just called “oak balls.”

Always Daddy had stacks of firewood under the canopy of branches, usually fruit wood that he’d gleaned from neighboring orchards that were being replaced. But here we see it is logs cut from our tree’s own pruned limbs.

One year my grandma gave me a little tent for my birthday and I set it up under the tree to lie in the summer long, reading comics and books and sucking on cubical cinnamon suckers.

Doghouses were common at the base of the trunk, and one year we had a banty chicken coop there. The basketball hoop that my father built for me was shaded by this tree friend. And as I think more about the shade it provided, I wonder how much money was saved on cooling bills because we had a partial shield from the burning Central Valley sun.

In his last years my father would walk out under the tree to the edge of the orange grove and scatter grain for a family of wild pheasants that visited. You can tell that this picture was taken pre-trim. One pheasant can barely be seen between the rows of trees.

One view of our tree that we didn’t have as children was from above. But some time after we were all grown up an aerial photographer took the photo below and came to the door after the fact to present his wares. Of course Daddy couldn’t say no. As he studied the picture he could see his spray rig in the driveway and him bending over it. And soon each of us kids received a gift of a framed picture of our childhood home — and my favorite tree.

8 thoughts on “My Valley Oak”