Today is Friday, which earlier in the week I designated as Baking Day. In anticipation, Wednesday evening I put two sourdough sponges to ferment. I am still experimenting with both the pineapple starter and Manuel’s starter. Last time I made bread with the pineapple one and forgot the salt. This time my focus was on following through with the salt, and on making a slightly smaller amount of dough with each type of starter, so that I would end up with two loaves of each.

The Manuel’s Rye Sour starter already has a darker color owing to its beginnings, though I haven’t fed it with rye flour yet. I might yet do that, if I buy some more rye flour; so far I’ve only fed it with unbleached white flour and water. Anyway, to go along with its flecks of whole grain I found a bag of teff flour in the freezer and put two cups of that into the sponge along with water and white (wheat) flour.

I added instant potato flakes along with flour and water into the pineapple starter.
Of course after I had taken a cupful out of each jar of starter, those soupy messes needed replenishing. I left them on the counter, too, when I went to bed.

The yeasts that grow in the pineapple sponge seem to work more slowly than the other – but its replenished starter was already highly active when I took this photo at right. It takes all my powers of restraint to not put up even more pics of bubbly gruels – must be the farmer in me that thrills at living and growing things .

I should have stuck that one back in the fridge! As I was about to drop off to sleep (while reading from the beginning of The Moonflower Vine a second time this month) I heard something like a balloon pop somewhere in the house. Out of my warm bed I popped to go looking around…but I didn’t discover until the next morning that it was the pineapple starter that had shot its lid off by super exhalations.

The plan was to let the sponges sit around all day Thursday to get more sour. First thing I took some pictures. The pineapple sponge wasn’t very bubbly, but Manuel’s looked like it might be a pudding named Chocolate Foam. It has teff flour in it, remember.

Eritreans in my church often make their himbasha bread with some teff flour. They almost always make injera bread with at least part teff. It’s the smallest grain, and has more bran and germ than any other grain, too, giving it that warm hue. I found a fascinating page that clearly shows the relative kernel size of various grains.

By Thursday evening the pineapple sponge was similarly bubbly, while the teff mixture had separated into that thin porridge that isn’t very pretty. Usually when a jar of starter has sat in the refrigerator for a week or two it also looks like this (below), and sometimes also has some black oxidation in the mix. You’re supposed to just stir everything ugly back in.

This morning I used the Kitchen Aid with dough hook to do most of the kneading of my dough. I added gluten flour to both batches, and a tablespoon of salt and sugar to each, but no fat.

The dough didn’t take all day to rise in the pans, as I’d expected — it took less than two hours. Jody at Gumbo Lily had told me about using a Dutch oven to bake a crusty “artisan” type of loaf, so I did that with one of the teff loaves, letting it rise and bake on a round of parchment paper.

Just before putting the potato dough into the pans I wondered if it might be a little boring as it was, so I scattered a total of three tablespoonfuls of poppy seeds on to the dough and kneaded them in as best I could.

The Dutch oven was supposed to bake at 500°, and many sourdough recipes called for a 450° oven, so I pre-heated the oven and the cast iron at the higher temperature and then dropped it to 475° after putting all the pans in at the same time.

Halfway through I took the lid off of the pot, and this was the state of things: 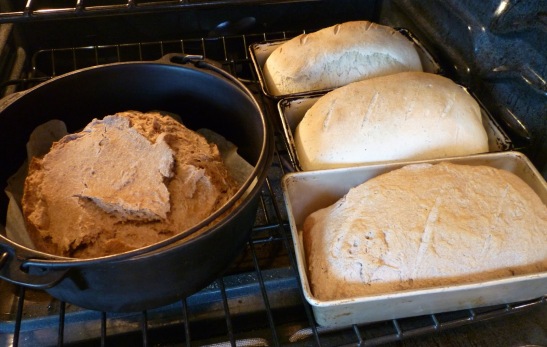 As soon as I could I sliced into what might be called the Potato-Poppyseed Loaf (There is no pineapple flavor remaining from that original start weeks ago). It has a nice crumb, and the poppy seed flavor comes through just right. I didn’t expect the poppyseeds to be evenly distributed, since they went in so late — and they weren’t. Its sourdough flavor is mild. 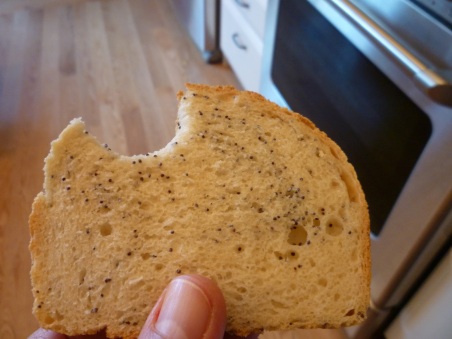 Later Mr. Glad shared some of the Teff Loaf with me. It also is very tasty, only mildly tangy compared to my sourdough bread of antiquity, and compared to the Potato equally chewy and moist with a good texture.

What have I learned from my experiments?
1) In my sourdough bread I like the flavor of potato more than that of teff.
2) I like salt in my bread.
3) Fat is probably not necessary in sourdough.
4) The quantities of flour and water and salt I used in this batch were just about right.
5) Both of these starters work fine without the addition of commercial yeast.
6) So far the bread is not as dense in texture or as sour as what I used to make.

These loaves are more worthy to be given away than my last boring salt-free bread, so perhaps I can get them out of the house soon and be ready to do some more Sourdough Research. One thing I wonder is, will either of the starters change over time and make bread that is more sour? What was it that gave that old-style bread coming from my kitchen its character? Was it some feature of the climate we lived in at the time, a mini-climate just 15 miles away over the hills and farther from the ocean?

Perhaps I will try making the identical dough with both of the starters, to find out if I like the flavor or action of one better. Then I could dispense with having two containers crowding my already stuffed refrigerator.

I won’t likely find all the answers to my questions, and I will be content if I can eventually settle on a form of sourdough that is well-liked by our household and at least a couple of others. Then we’ll see if I can remember to feed the starter.