By the time I came into my husband’s family, Seedy Buns were only a memory in the minds of the older generations. My father-in-law said they were cookies featuring caraway seeds and a treat eaten at Christmas, but perhaps he got them mixed up with Seedy Biscuits? Because a bun is bread, we all know that, whereas a biscuit can be a cookie if it is in the British Isles. But what if you take a bun and sweeten and shorten it up? Might it be like a little cake? 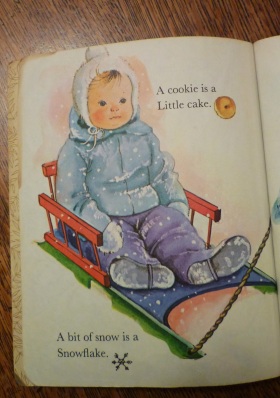 I never thought of a cookie as being a little cake until I read The Little Book to my children very long ago. “A cookie is a little cake,” it says right there. I know that type of cookie, and I don’t really care for them. I like mine chewy or crispy, but not cake-y.

In my joyful Christmas cookie project, which is my art at this time of year, I had the idea to make a modern Seedy Bun that would hearken back to the ancestors who brought their Cornish traditions to California.

Once a cousin had taken a box of sugar cookie mix and thrown in a can of caraway seeds to create a simple reenactment, and I scoured the Internet to see what else might be out there as inspiration.

A fascinating collection of recipes from newspapers dating 1891 to 1981 gave a hint as to the possibilities, and included two poems mentioning a grandma or an aunt making caraway cookies. Here’s one of the recipes that even claims to make a crisp cookie: 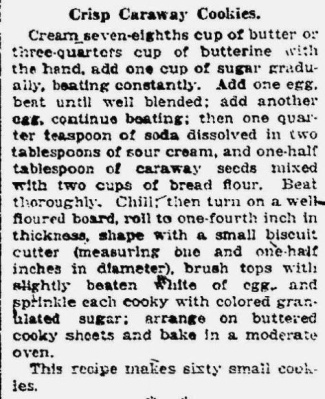 It was published in Lincoln, Nebraska in 1919, and I think is interesting for its use of the word “butterine,” which I’d never seen before.

Early American cooks also used seeds liberally in their cookies, often coriander or caraway, and I liked the looks of a glazed cookie based on one from the first American cookbook published in 1796.

Cooks are like folk-singers, changing and adapting their material freely, and it’s not as though I am looking for The Original Seedy Bun recipe to cook myself, but it would be nice to know what those cookies were like, that my husband’s grandma made. 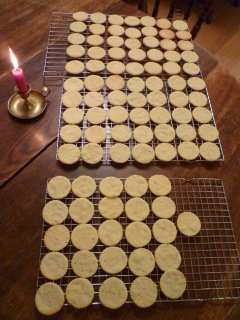 In the meantime I decided to try this recipe for lemony cookies, calling for ground caraway seeds which I didn’t have. I tried grinding some in the blender, but they only burned from the heat, so I used whole seeds.

Some of the baked cookies were a little skimpy on seeds, like the one I picture below. I’ll have to see how everyone receives them before I decide whether to make these the same way another time. If I make a different Seedy Bun, I might bake these again as well, without the caraway, because I agree with their creator about their appealing “depth and intensity” from the lemon juice and zest.

After my Seedy Lemon Biscuits were put away in the freezer, I heard from an older grandchild of my husband’s grandmother who, I was so happy to hear, had made a collection of Grandma’s recipes, and the first cookie in the collection was indeed called Seedy Buns.

Seedie Buns – 5 doz. These are similar to sugar cookies.

Add: 3 eggs one at a time, beat well after each.

To form cookies take about 1 T dough and roll into ball.

Flatten to 1/4″ with bottom of a glass dipped in sugar.

If any of my readers have favorite seedy cookie recipes, I’d love to hear about them. It’s not too early to start brainstorming for next year!