I took a long walk around the neighborhood this morning. If I had brought my camera, I’d have more pictures to post, but then the prayer and exercise benefits of my outing would have been greatly reduced, so I don’t regret not thinking of it.

I noticed fuzzy chamomile plants close to the ground, and the cobalt blue ceanothus bushes such as we used to have at our former property. Many types of ceanothus grow wild in California but you can also buy them at nurseries. The picture above shows the color that is blooming around here right now.

March is the month of our wedding anniversary, which makes it the month that we have many times made day or weekend trips within northern California to celebrate. Usually some blue bushes are flowering in the places we are visiting, and we are outdoors a lot walking or looking from highway overlooks. Maybe this is one reason that blue flowers have long been my favorite.

For example, Pride of Madeira (Echium candicans), which I first noticed decades ago in Big Sur. It can grow in our county and we even had one on our church property for a while, but they must not thrive here. The picture at bottom I took last year in Cambria.

At home this morning the pine cones that are forming in our big tree caught my eye. It seems to me there are double or triple the number of them that have grown there before — or maybe it is just my imagination. 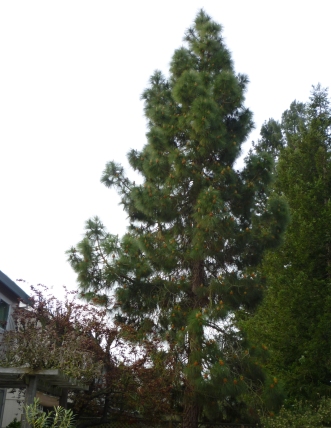 Is there some climactic condition that could cause this, say, severe drought that makes the tree feel that it is dying, and ought to get busy and reproduce? I’ll have to ask the children if their memories are different from mine. I still don’t know what kind of pine this is. The task of finding out needs to go on a project list that is buried somewhere here. It will be a small project just to find it. 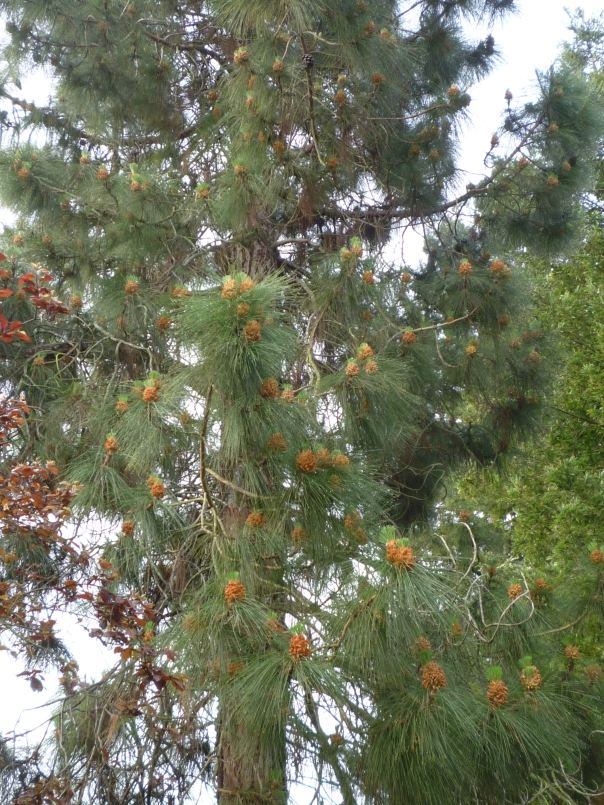 The children I want to consult with, all five of them, will be here celebrating with us this month – we’re letting them do the traveling this year. It’s not like the early years when we had to get away to be alone. Nowadays being alone is the usual thing, and we are thrilled when any kids converge on our house.

Mr. Glad and I sat in the back yard this afternoon, on a bench in the sun. If I have many more days in which I accomplish both a walk beside a creek among the trees and sitting in the sun, I may find that I don’t need the Christmas lights that are still shining around my kitchen window. 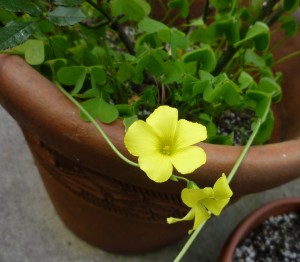 While we were relaxing and facing my potted plants, it suddenly dawned on me that sourgrass was living and blooming in the miniature rose pot. When did he move in? I don’t remember having sourgrass anywhere on our property in all the 25 years we have lived here. Maybe a bird dropped in a seed.

Another new thing is the Christmas cactus in bloom. The story behind my cactus is long: Friend May and I had both admired the mother cactus in our friend Jerry’s house for decades. It was a prolific bloomer and it was a huge potted plant on wheels, taking up a space about 4′ x 4′, with most of that measured out by long arching stems. When Jerry moved to a retirement home 3-4 years ago, May gave me a big chunk of his cactus plant with roots.

But I don’t have the wall of windows Jerry did, or any sunny and convenient indoor place for houseplants, so I moved my piece of cactus from place to place outdoors, and under the eaves in the winter. I made many cuttings from it and managed to give at least one away before they died of neglect. Last month my sister told me that her grandchild of the Jerry cactus was blooming beautifully on the central California coast, which was a big relief to me — my guilt at not providing a nurturing home for my adopted child was assuaged by knowing that the next generation was prospering.

Not a week later I walked past the corner of the utility yard where my poor peaked plant would have gone unseen as usual if its flower buds hadn’t glowingly called up to me, “Look at us!” I was shocked and blessed no end, and quickly moved “her” to a sunny place. Now that my cactus has shown a desire to perform, I am endeared to her in a new way and have named her “Tylda,” after Jerry’s late wife.

This site tells how to care for these plants, and it showed me that this one is not a Thanksgiving cactus as I had previously thought, but a Christmas cactus. It also says that they require cold temperatures to spur them into blooming. So perhaps it’s not a bad thing that I left it outdoors. I’m thinking of ways that I can be a better houseplant owner in the future.

But this month, it’s the outdoor plants for me, and I do enjoy whatever colors they are dressed in when they bloom. But especially blue.