In the West it is the end of Good Friday as I write, but this year for us Orthodox it is

the beginning of Lazarus Saturday, when we remember an event that starts out very poignantly, with Jesus’s friends lamenting the death of their brother, and Jesus Himself weeping.

This story of a death and of friends and family sorrowing is timely in my own life right now, and of course I have done some weeping lately – but mostly I wanted to write about the flowers that have come to me, and I may be stretching a bit to connect all these thoughts together.

Flowers have been coming into our house nearly every day for more than two weeks. They are beautiful bouquets and arrangements and plants, and when the first one arrived, before my husband died and on our wedding anniversary, the circumstances made it obvious that God had sent it by the hand of an angel, to convey His love and to assure me that He 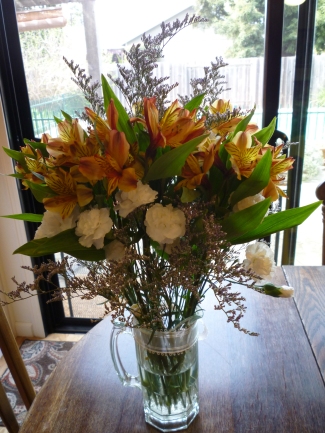 will be my Husband, as it says in Isaiah 54: “For your Maker is your husband; the LORD of hosts is his name; and your Redeemer the Holy One of Israel….” I cried a good deal over that bouquet, and as the florist delivery man and I became better acquainted day by day, I received every new gift with joy.

We know flowers not just as symbols, but primarily as real and exquisite works of art, lovely in themselves. I think the florist noticed the repeated name on each order and tried to make every creation a little different; we have been enjoying dozens of varieties and species of blooms, ferns, branches of shrubs, succulents in ever-changing combinations, all gorgeous.

Other friends brought their own original and unique arrangements, or sometimes just a contribution to a nosegay. Each was given a place in the house where it could minister to the crowd of family who were coming and going for a fortnight and often sleeping here (One night 15 of us slept under this roof.), but I think I was the 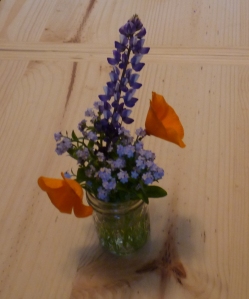 most nourished of anyone by all the sweet flower-love. These real and aromatic things helped to keep me aware of God’s presence as much as did the kind messages in cards, and the care packages of fruit and candy.

They also gave me a job to do. While my children took over the more difficult practical matters of phone calls, shopping, cooking and organizing a funeral, I was able to wander about tending my flowers, trimming the stems, changing the water, removing spent ones and recombining the longer-lasting blooms (Carnations win the prize for aging well.). It was and is an easy sort of gardening, and very soothing.

People have given our family flowers and other kindnesses because they love us; that makes them feel our sorrow with us. We don’t really need any more explanation than that, but there is another aspect to our sorrowing. I find what Fr. Alexander Schmemann

says about Jesus’s tears to be helpful:

He weeps because He contemplates the miserable state of the world, created by God, and the miserable state of man, the king of creation… “It stinketh,” say the Jews trying to prevent Jesus from approaching the corpse, and this “it stinketh” can be applied to the whole of creation. God is Life and He called the man into this Divine reality of life and “he stinketh.” At the grave of Lazarus Jesus encounters Death — the power of sin and destruction, of hatred and despair. He meets the enemy of God. And we who follow Him are now introduced into the very heart of this hour of Jesus, the hour, which He so often mentioned. The forthcoming darkness of the Cross, its necessity, its universal meaning, all this is given in the shortest verse of the Gospel — “and Jesus wept.”
….

Perhaps Mary and Martha didn’t have as many flowers as I do when Lazarus died. They likely did have flower essences in the ointment they would have used to prepare their brother’s body for burial.

And they had the Lord, not just weeping with them for the wrongness of death, but in His love giving the ultimate gift, His own Self. Without the knowledge of that Love and the assurance of a coming Resurrection, what flowers can give wouldn’t be very satisfying. But while my husband walked this earth he and I shared Christ’s life-creating Love, and we still do. Flowers are one more reminder of that reality to my still-weeping heart.

12 thoughts on “Lazarus and Flowers”