Before buying an audio recording of Middlemarch I listened to many samples from different readers, most of them women. I chose the one I did because I didn’t mind the voice and diction of the reader, and it was less than half the price of some of the newer ones. It happens to be read by the English actor Gabriel Woolf, and I had not listened for a half-hour before I was very glad to have accidentally chosen this recording. The voices and 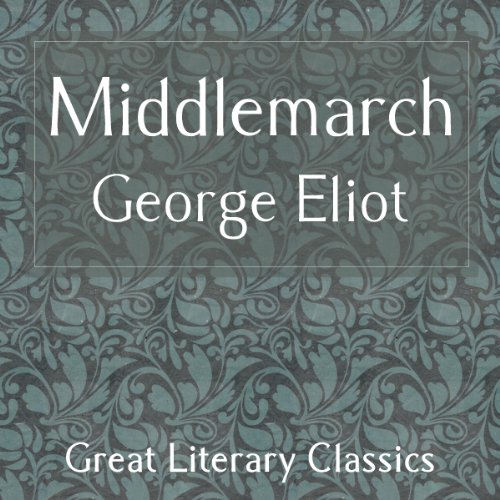 accents and even chuckles he gives to the various characters are wonderful — and with so many interesting men as main characters, it now seems quite the best thing to have a male voice to bring them alive.

The reviews point out that this is a “vintage” recording, and that the production quality may not be up to snuff. There are actually some background noises occasionally that don’t fit the time period, but they didn’t bother me. Woolf trips over a word now and then, too, but his overall dramatic gifts more than compensate for his lack of constancy.

And speaking of flaws, our Middlemarch characters certainly have them. Eliot delves deep into their personalities and motivations, and knows what primitive weaknesses are the reasons for their peculiar behaviors as though she were God Himself. And like God, she urges us to be kind and to forgive.

I already shared one excerpt that gives a glimpse into Will Ladislaw’s character. (On a side note, why do you think that he is always called “Will” or ” Will Ladislaw,” while most of the men, including Lydgate, are referred to by only their last name? Is it age, or social standing? Fred Vincy is also in this category of naming, and he is like Will in that he isn’t established in a profession or even a direction yet.)

Some of the people in the town are more disagreeable than others, but then they might be ridiculous in their pride, and make me laugh; it’s easier to be patient with them, especially when I don’t have them in my own real life. (Mrs. Cadwallader is best left in someone else’s neighborhood!) Lydgate the young doctor takes himself too seriously to be lovable in that way, though, and I tend to not like him. In talking about this man Eliot writes:

…character too is a process and an unfolding. The man was still in the making, as much as the Middlemarch doctor and immortal discoverer, and there were both virtues and fa

ults capable of shrinking or expanding. The faults will not, I hope, be a reason for the withdrawl of your interest in him. Among our valued friends is there not some one or other who is a little too self-confident and disdainful; whose distinguished mind is a little spotted with commonness; who is a little pinched here and protuberant there with native prejudices; or whose better energies are liable to lapse down the wrong channel under the influence of transient solicitations? …. Our vanities differ as our noses do: all conceit is not the same conceit, but varies in correspondence with the minutiae of mental make in which one of us differs from another. Lydgate’s conceit was the arrogant sort, never simpering, never impertinent, but massive in its claims and benevolently contemptuous. He would do a great deal for noodles, being sorry for them, and feeling quite sure that they could have no power over him.

Noodle was 19th-century slang for “dummy.” I’m afraid my own attitude toward Lydgate might fall into the category of “benevolently contemptuous,” and I hate that, so here’s hoping I can develop more real sympathy for him soon. He didn’t know how fast he would get into deep water when he stepped into the pond of Middlemarch life!

1 thought on “Men of Middlemarch”