…it’s magic. Or if you will, a gracious gift of God.

Wild animals frequent this space. In the past, I’d seen only the orange type of dragonflies on the property, but now, a different guy was just relaxing on a fig leaf. I walked all around the insect and talked to him, and he didn’t appear to flinch, so I stood right in front and met him face-to-face. His giant eyes did move about cartoon-like, seemingly trying to focus on my face, and his head side to side. Evidently I did not pose a threat; he remained calm, and I went back to work.

But then there was my own cabbage white hanging on a stem of lavender:

This next garden animal is so tiny, I am amazed that I even noticed him perched on a helianthemum flower that was an inch across. He came into focus once the photo was saved on my phone.

The birds are not tame. This morning, we were sitting or standing by the kitchen windows when Clunk! a smallish bird flew into the slider, and we looked up to see only a flash of vast patterned wings, as a raptor swooped under the patio arbor and with a whoosh carried off the little bird. That is the wildest event ever. 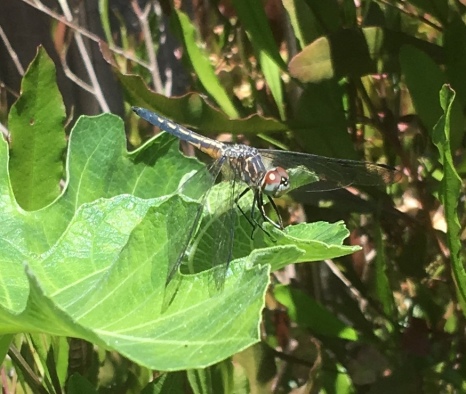 13 thoughts on “When a dragonfly meets your gaze…”