A couple of weeks ago I was writing about the muddiness of the pool (my mind) in which all the rich material of Japanese history and culture has been collecting. I anticipated the waters clearing eventually making it possible for me to compose a book review or two by way of participating more fully than I yet have in the Japanese Literature Challenge.

But just as things were coming into focus, the body in which my mind resides became afflicted with a fat head cold. My head feels huge and achey and that makes it hard to think. After picking up one book after another this morning, reading a few lines, realizing that I was not interested, I finally lit upon a novel I was already a couple of chapters into, Kusamakura (also known as The Grass Pillow), as the one that was not too heady and not boring either. This book by Natsume Sōseki is nothing like his other novels, and it was meant to be a “haiku-style” novel, hearkening back to old Japan just as most writers were eagerly embracing western culture. He published it in 1906.

The narrator is taking a little holiday for the purpose of contemplating the beautiful. I have been enjoying his lighthearted philosophical musings and descriptions that are not too hard to engage with in my compromised state of mind.

This afternoon I was reading by the fire, and became so sleepy and warm, I kept nodding off, so I went up to my bed and lay in the cool room, continuing to find on every page his delighted descriptions of the beauty of the tea sweet, the silvery bamboo in the distance, the pleasant arrangement of the rooms of the inn, and the calligraphy on the wall. When his mind was briefly agitated he wrote haiku as a way to practice mindfulness and calm down, and it restored his sense of humor. 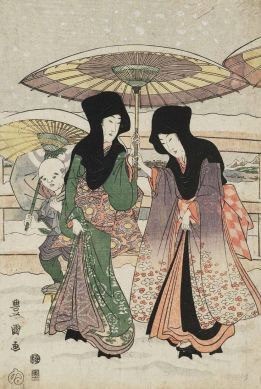 Our narrator is an artist, and he wants to paint many things he sees; other times he says that he feels that he is in a painting, because of the sublimity of the scene he inhabits. When I came upon this passage as I lay on my bed I really engaged with his mood:

“Drawing a picture feels like too much trouble just now, and as for coming up with a poem, my mind is already immersed in the poetic — to actually compose something would be merely a waste of breath. Nor do I have any inclination to undo the box of two or three books that I’ve brought along, tied to my tripod, and read. I feel perfect happiness simply lolling here on the balcony in the company of the shadow cast by the blossoms, my back toasting in the warm spring sunlight. To think would be to sink into error.”

For different reasons than this man, I’m sure, I have felt that my trying to write anything  analytical about my readings thus far would surely have been to sink into error. The risk of reductionism is more of a certainty than a possibility. Rather, I will try to follow his example and pay attention to each “thing” I encounter without worrying about how it’s related to all the others. I know I won’t be writing any haiku to distill my experiences, but after contemplating the literary scene it might happen that I find something to “paint” here.

The Japanese Literature Challenge is going through March. The books I still want to delve into more or finish are:

I realize that during this read-along, a few of the things I’ve been reading are in the non-fiction category, not the literature genre. I chose them in hopes of getting a little more background knowledge so that I could better appreciate the literature, and I’m content with how it’s going.

My brief exposure to the literary world of Japan has started me on a deeper study of broader and universal aspects of our humanity. But more on that later. Right now, I’m going back to the countryside of Japan where I can loll about and absorb some beauty. Come to think of it, I’ll put the kettle on and brew a cup of tea for good measure.

7 thoughts on “Simply lolling and not wasting breath.”