I’m glad to say that the two littlest of my (thirteen) grandsons are still here with their parents. I really do love hanging out in the garden with them; whether it’s engaging the “help” of Raj to pick up pine needles or wipe the patio furniture, or sitting by Rigo as he splashes his hands in a pan of water. 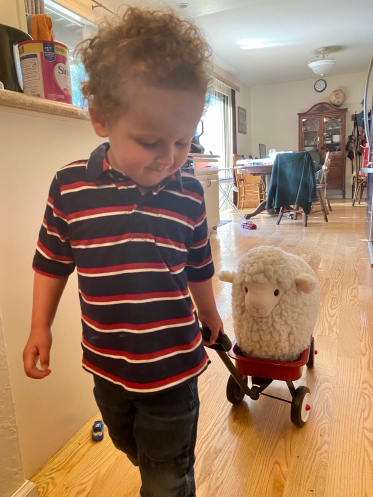 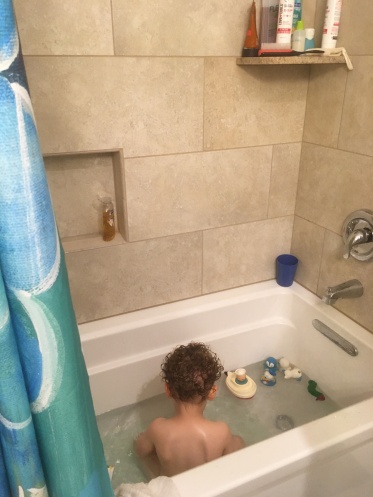 Yes, that’s my brand-new bathroom! It’s about the only part of the remodel that is both usable and picture worthy. Busy little people keep me occupied with better things than the rest of it, like unfinished closets.

On the Fourth of July Kate and I stayed up long after the little boys went to bed, to watch the film version of the musical “Hamilton.” We had thought to watch only part of it, but it was hard to stop. Besides, my neighbors were making a lot of noise with their fireworks, so our household couldn’t easily settle down anyway.

A couple of years ago after my cousin Renée saw “Hamilton,” she gave me the book by Ron Chernow that was its inspiration. The two-hour show naturally had to reduce the story of Alexander Hamilton’s life and times to a few themes and historical threads that Lin-Manuel Miranda found especially meaningful; I don’t think I’d have appreciated it much without the background of the book. But having become familiar with the players from Ron Chernow’s purely historical telling, I was impressed with how much could be expressed through the choreography alone. Thomas Jefferson’s character was a brilliant example of this. I’m sure if I watched this fast-paced musical a few times more I’d notice much more; but on my own I’m not much of a watcher of shows, period. I’m glad Kate arranged it, and I wanted to mention the book-theater connection here with my recommendation.

The weather has been perfectly summery, and not too hot to have friends over twice already while Kate is here, and to eat brunch in the garden. Feeding  people, and helping to facilitate the necessary baths and naps and soothing garden tours… those are some of the fundamental activities that have consumed me this week from morning to night. Maybe that is why I liked this poem. Also, it reminds me of my own father coming out of the 100-degree afternoon into our ranch house, and eating thick round slices of cold watermelon before returning to irrigate his orange groves.

Summertime is like a bath of sensory experiences rich with poetry. It slows and calms me and prompts prayers of thanksgiving. Drink up!

CARRYING WATER TO THE FIELD

And on those hot afternoons in July,
when my father was out on the tractor
cultivating rows of corn, my mother
would send us out with a Mason jar
filled with ice and water, a dish towel
wrapped around it for insulation.

Like a rocket launched to an orbiting
planet, we would cut across the fields
in a trajectory calculated to intercept—
or, perhaps, even—surprise him
in his absorption with the row and the
turning always over earth beneath the blade.

He would look up and see us, throttle
down, stop, and step from the tractor
with the grace of a cowboy dismounting
his horse, and receive gratefully the jar
of water, ice cubes now melted into tiny
shards, drinking it down in a single gulp,
while we watched, mission accomplished.

12 thoughts on “Summertime is a bath.”