I’m glad to say that the two littlest of my (thirteen) grandsons are still here with their parents. I really do love hanging out in the garden with them; whether it’s engaging the “help” of Raj to pick up pine needles or wipe the patio furniture, or sitting by Rigo as he splashes his hands in a pan of water.

Yes, that’s my brand-new bathroom! It’s about the only part of the remodel that is both usable and picture worthy. Busy little people keep me occupied with better things than the rest of it, like unfinished closets.

On the Fourth of July Kate and I stayed up long after the little boys went to bed, to watch the film version of the musical “Hamilton.” We had thought to watch only part of it, but it was hard to stop. Besides, my neighbors were making a lot of noise with their fireworks, so our household couldn’t easily settle down anyway.

A couple of years ago after my cousin Renée saw “Hamilton,” she gave me the book by Ron Chernow that was its inspiration. The two-hour show naturally had to reduced the story of Alexander Hamilton’s life and times to a few themes and historical threads that Lin-Manuel Miranda found especially meaningful; I don’t think I’d have appreciated it much without the background of the book. But having become familiar with the players from Ron Chernow’s purely historical telling, I was impressed with how much could be expressed through the choreography alone. Thomas Jefferson’s character was a brilliant example of this. I’m sure if I watched this fast-paced musical a few times more I’d notice much more; but on my own I’m not much of a watcher of shows, period. I’m glad Kate arranged it, and I wanted to mention the book-theater connection here with my recommendation.

The weather has been perfectly summery, and not too hot to have friends over twice already while Kate is here, and to eat brunch in the garden. Feeding  people, and helping to facilitate the necessary baths and naps and soothing garden tours… those are some of the fundamental activities that have consumed me this week from morning to night. Maybe that is why I liked this poem. Also, it reminds me of my own father coming out of the 100-degree afternoon into our ranch house, and eating thick round slices of cold watermelon before returning to irrigate his orange groves.

Summertime is like a bath of sensory experiences rich with poetry. It slows and calms me and prompts prayers of thanksgiving. Drink up!

CARRYING WATER TO THE FIELD

And on those hot afternoons in July,
when my father was out on the tractor
cultivating rows of corn, my mother
would send us out with a Mason jar
filled with ice and water, a dish towel
wrapped around it for insulation.

Like a rocket launched to an orbiting
planet, we would cut across the fields
in a trajectory calculated to intercept—
or, perhaps, even—surprise him
in his absorption with the row and the
turning always over earth beneath the blade.

He would look up and see us, throttle
down, stop, and step from the tractor
with the grace of a cowboy dismounting
his horse, and receive gratefully the jar
of water, ice cubes now melted into tiny
shards, drinking it down in a single gulp,
while we watched, mission accomplished.

These men were the reason that Philadelphia became a place we visit for historic tours, and their life-size statues made me really glad I had come. However, if it weren’t for the fact that my cousins live here, I wouldn’t have made the trip. 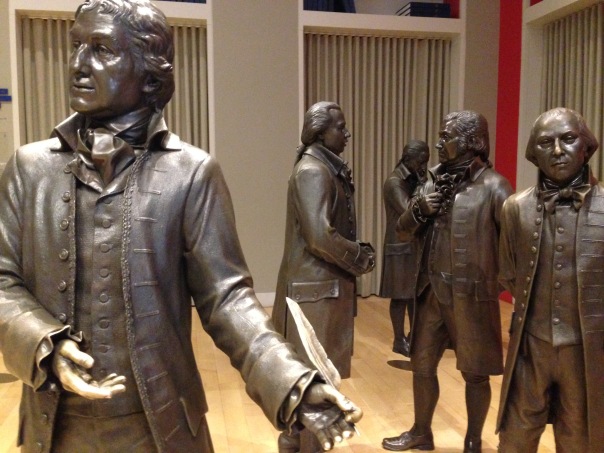 It was less than four years ago that I “found” my Pennsylvania cousins after losing contact with them for most of our lives. They were on the east coast, our family was on the west, and when we were children our parents didn’t have the means to get us all together. When my aunt died, I had the time and money to go to her memorial, and since then her three daughters and I have been getting to know each other.

Grace picked me up at the Philadelphia airport; we had made plans to visit some historic sites, so we did that right away. It was still less than one week since the national election, so our government and constitution and the events of our country’s founding were pertinent to all that was on our minds and hearts.

At the National Constitution Center we sat in a theater-in-the-round for a show called “We, the People,” which had rousing recorded music and multimedia images, but was focused on the live performance of a real human with a pleasant voice dramatizing the story of the Constitution of our nation. It was short enough for the shortest attention span, I think, and went by too fast, but I loved the presence and speech of that woman and was glad that our admission fee was contributing to a quality presentation about something fundamental and important to us all. 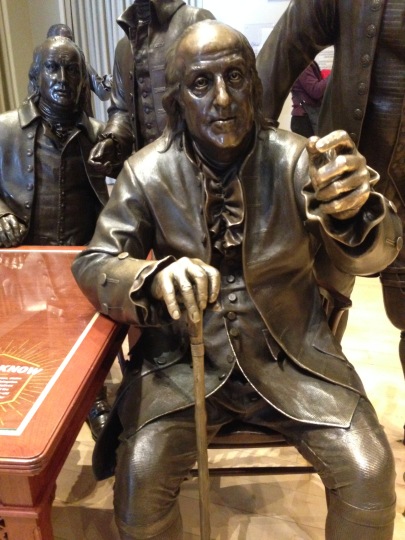 My favorite part of this place was the bronze statues. Being able to walk so intimately among them and look in their faces was very affecting. I admire those signers of the Constitution, and others of the Founding Fathers who weren’t there at the time, so much! I know, one isn’t supposed to say things like that without mentioning sins that we moderns judge them for. But I don’t think many of us could hold a candle to their bravery and principles, their intelligence, and the hard work they did to hash out the Constitution. I am supremely grateful to them, and I loved this exhibit for reminding me of that.

I like that they have Benjamin Franklin sitting down; he was over 80 at the time and it is said that “though he did not approve of many aspects of the finished document and was hampered by his age and ill-health, he missed few if any sessions, lent his prestige, soothed passions, and compromised disputes.“

Alexander Hamilton’s statue is standing alone, not in conversation with anyone. I would like to read more about the man and find out if there was an artistic reason for that attribution of body language in the placement of him. A day or two after this my cousin Renée played some music from the Broadway musical “Hamilton” for me, and I liked it a lot. If any of my readers has a book about Hamilton that you would recommend, please tell me.

Grace and I went next to Independence Hall, where the Constitution was actually signed, a 250-yr old building whose exterior is largely intact. It was built as the state house for the colony of Pennsylvania, the main part of the building completed in 1748.

The furniture in the Assembly Room where the signers met is mostly not the original pieces — in fact, the interior of the building itself is nearly all reconstructed/restored — except for two items: 1) the inkstand  used to sign the Declaration of Independence, and 2) the chair that George Washington sat in to preside over the Constitutional Convention in 1787.

“At the successful conclusion of the convention, Benjamin Franklin stated that he had looked at the carved sun at the top of the chair many times, but had never known whether it was rising or setting. With agreement on the Constitution, he announced that it was a rising sun, symbolic of the promising future of the United States.” That is why it is called The Rising Sun Chair (picture below). 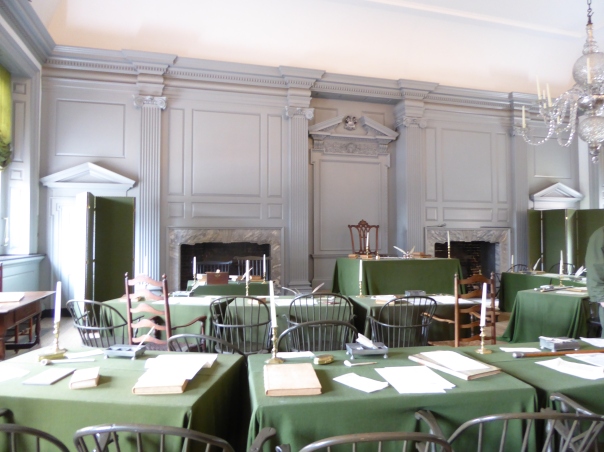 Benjamin Franklin’s house used to stand a short walk from Independence Hall. Now its site is a historic exhibit; you can look down into a hole and see some of the brick of the original house, which was Franklin’s Philadelphia residence in the last decades of his life, and you can walk among the rooms that are no longer there.

I liked this exhibit, because of the quotes from his letters printed on floor plaques in the various “ghost rooms,” evidence that he was away a lot in those years. His wife had moved into the house in 1765, but he left for England that year and didn’t even see it until ten years later. He wrote lots of instructions about what he wanted done in and to it, though, plans for curtains and dishes and things. He wrote about his friends, and about building his library:

Years ago I had turned down an offer from my husband to visit Philadelphia for a day; I told him I’d rather wait until we could stay three nights in the city, so that we’d have two whole days for touring places like this, and more. But now that I’ve had my brief walk-around, I feel satisfied for the time being. Maybe if I spent more time reading about the people and events who are memorialized here, I’d want to come back for longer. But on this trip I was ready to go home with the cousins, and for the remainder of my stay, to live in the present.