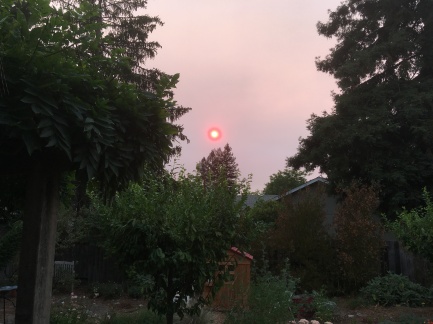 The California “wildfire season” has gotten off to an early and roaring start. In this era, mailings from the power company and other agencies remind us ahead of time that here, in addition to the usual four seasons, we have Fire, which can overlap both Summer and Fall. Others of you have Hurricane, which is another season that could be nicknamed “Scary.”

I don’t enjoy writing about flames and destruction, loss of buildings and human lives, and I trust that we all see plenty of horrific images of such things already. But because the location on my home page says “Northern California,” you might wonder if I’m okay. Yes, I am. I don’t live in a hilly, woodsy area, and my town has its power lines underground, so generally this is a less fire-risky place to live.

But many of my friends nearby have been evacuated, as the same ones were last year. In the Santa Cruz Mountains, the homes of other dear people are in danger, or may be gone. I pray that they are saved! I wrote about that area in a couple of posts here; this one, Bridges and Streams, has the most photos that will give you an idea of the terrain. It’s where my husband and I honeymooned, where his grandma had two cabins at different times, and of which most of our children retain strong memories.

Currently the only direct effect on me seems silly to mention. Smoke drifts through from nearby fires; I keep checking the AirVisual app to see if I am in the “Good” green range, or if the Air Quality Index has jumped past “Moderate” to “Unhealthy.” Daughter Pippin is not close to a fire, but has been suffering from unremitting high smoke levels for days and is on her way to Oregon in hopes of being able to breathe at least a little better up there.

midday, I open the windows to cool off the house; most homes around here don’t have AC. So far we’ve had a Green period once or twice a day, and the recent heat wave has ended, so all is tolerable. But I did just order air purifiers, so that if evacuees need to come here, it will be a reliable refuge from smoke as well as danger.

This morning I woke thinking of a blogger I’d been missing. When I looked her up on my little phone, for some reason the first post that came up was from April of ’19. This was one of those Divine Meetings that angels can arrange, evidently even by means of WordPress Reader. Because it is about the Notre Dame fire, and includes a video (best to click through from her site) of the people who gathered to sing as they watched the devastation. I knew about that response but hadn’t seen any footage before. It was just what I needed, a connection to the prayers and sorrows of people everywhere, a reminder to sing myself. I know quite a few hymns that are appropriate.

24 thoughts on “The season we dread.”