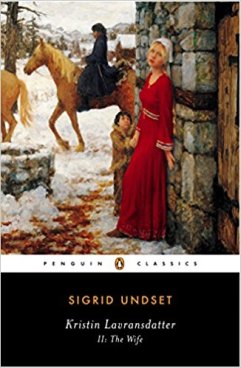 It’s been ten years since I posted this review. Since then I have revisited the story itself, and it seemed good to publish again. It’s well worth sharing at least that often.

A big part of the plot is how Kristin’s husband, whom she chose in youthful rebellion, gets involved in an insurrection. That, and his recklessness on the moral level, combine to cause the loss of a heritage that had taken generations to build.

The first time I came to the end of Kristin Lavransdatter I resolved to read it again very soon. The friend of a friend reads the trilogy once a year, and certainly it could stand up to that degree of intimacy; Kristin’s world of Norway in the 14th Century is vast with well-developed characters, complicated politics, and a daily life where the pervasiveness of the church and Christian faith often shows cracks revealing the old pagan traditions as an under layer.

My own initial discovery, in the translation from Norwegian into English by Charles Archer, seemed to provide a mere introduction, partly because I was reading too fast, eager to see how the heroine’s life turned out. There were so many people involved, as I noticed midway, I started taking notes on how they were related to the protagonists, knowing that it would help me understand their significance. My plan was to take even more extensive notes from the outset on my next reading.

That was more than ten years ago, and by the time I got to my second reading this year I was willing to try the new translation by Tiina Nunnally, touted by pretty much everyone as a better one, in that it does not involve the unnecessary–and, to some people, stilted and cumbersome–older English words and syntax. I had rather appreciated the language, as a reminder that Kristin’s world was not much like my own, no matter how similar some of her womanly and just plain human concerns resembled those of people everywhere down through the ages.

This time, I was reading in bed, lying down before sleep, or at the gym on the treadmill, so my smart plan to take notes wasn’t feasible. I had to make my second tour through the novel as I’ve been admonished to travel through a foreign country, fully expecting and planning that it won’t be the last time I visit. They say that is the only way to make yourself relax enough to enjoy and retain what you do manage to see and encounter.

And I did see new and different things this time through. There are many books I truly want to read more than once, but not many novels have I actually gone back to again, so this kind of rereading was not a familiar exercise. As I came to remembered parts of the Kristin tale I was surprised to see that they didn’t take up as many pages as I thought they would need. Many sub-plots and attributes of Kristin’s family and friends were as good as new to me; evidently I missed them completely before.

As infused with a sacramental faith as the medieval world of these books is, I’m sure they influenced me on my path to Orthodoxy. Now that my own perceptions and beliefs are being forged into something more like the tradition that was Kristin’s foundation, I think I am better able to appreciate some parts of the story. The deathbed scenes were striking, for the way the Christian reverence for the body, and the repentant hearts of the Christians, were displayed. I’d like to write more on how they compare with descriptions of similar scenes in the Islamic culture of The Cairo Trilogy. 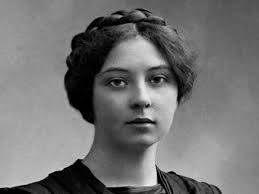 d with medieval Norway, or at least, that I didn’t want to spend time on a third reading when there are so many other books still to be known. That feeling didn’t last long, because by the time I came to the last pages I knew that I still have a lot to gain from acquaintance with the themes in this amazing epic by Sigrid Undset. It’s a glory to God that one human mind can create a complex and rich world like that of Kristin, peopled with characters whose drama reflects our own struggles to love God and repent of our besetting sins. Image Journal included the novel in its list of 100 best books of the 20th century that “manifest a genuine engagement with the Judeo-Christian heritage of faith.”

The Nunnally translation has extensive notes on the history and politics of that era in Norway, and some real historical characters come into play in the fictionalized account. Wikipedia’s entry on the novel lists many of the characters; I think I’ll print it out and use it for an outline on which to build my notes, those notes that I am still hoping to make on one of my revisits. I’m eager to return again and again to a place where my faith and thankfulness are encouraged as I make friends with fellow pilgrims.

10 thoughts on “I revisit my fellow pilgrim.”