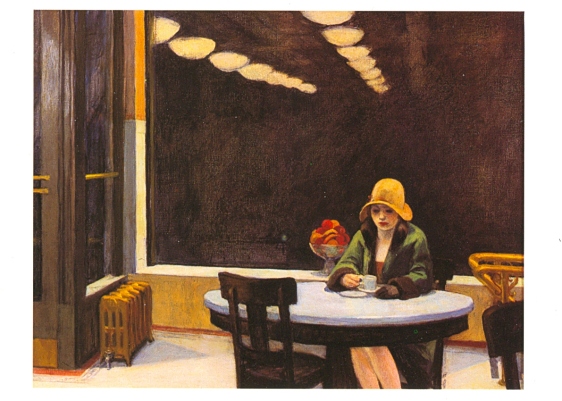 “Automat” is a picture of sadness — and yet it is not a sad picture. It has the power of a great melancholy piece of music. Despite the starkness of the furnishings, the location itself does not seem wretched. Others in the room may be on their own as well, men and women drinking coffee by themselves, similarly lost in thought, similarly distanced from society: a common isolation with the beneficial effect of lessening the oppressive sense within any one person that they are alone in being alone. In roadside diners and late-night cafeterias, hotel lobbies and station cafés, we may dilute a feeling of isolation in a lonely public place and hence rediscover a distinctive sense of community. The lack of domesticity, the bright lights and anonymous furniture may come as a relief from what are often the false comforts of home. It may be easier to give way to sadness here than in a living room with wallpaper and framed photos, the décor of a refuge that has let us down.

In this second chapter of his book The Art of Travel, Alain de Botton writes about people who travel more from an unhappiness at being home than from a desire for recreation. He includes reproductions and commentary on other paintings by Edward Hopper (whose “Automat” is the painting at the top of the page): “Gas,” “Compartment C, Car 293,” and “Hotel Room.”

The themes in the paintings here seem primarily to be isolation and loneliness, but to expand the scope of the chapter titled “Travel Places,” the author also introduces the life and writings of Charles Baudelaire, whose work was a significant influence on Hopper, it turns out.

Baudelaire, who from an early age wanted nothing more than to flee from home, all his life “felt more at home in the transient places of travel than in his own dwelling.” Not that he ever seems to have escaped the restlessness he describes: “Life is a hospital in which every patient is obsessed with changing beds. This one wants to suffer in front of the radiator, and that one thinks he’d get better if he was by the window.”

My own childhood and temperament having made me a perpetual home-lover, I’m unable to fully understand these dissatisfied impulses, but I have done a bit of solitary traveling now and again. I liked it because I like being alone, but I also always had caring people on one or both ends of my journey, and a measure of peace knowing that the One Who loves me most was right with me.

Carriage, take me with you! Ship, steal me away from here!
Take me far, far away. Here the mud is made of our tears!

I’ve struggled for weeks to write on this part of de Botton’s book, knowing that the topic is really too difficult for me, but wanting to tackle it because it’s fundamental to our existence. What line divides a peaceful solitude and a painful loneliness? Can any one of us hope to understand another person’s experience of isolation? Is loneliness an essential ingredient of human life, at least a step on our way to maturity?

In this book on travel we can’t expect to find a deep exploration of these ideas. Or even a nod to the question of whether we in the 21st century experience our loneliness any differently from Hopper’s subjects. In the whole book there is not a mention of cell phones or the array of social networking tools that seem to prevent any of us from being part of a scene such as de Botton describes in the paragraph above. Perhaps it’s a deliberate omission, and he hopes to gently propel the reader back to a low-tech experience of being alone.

But being with strangers in an airport or service station nowadays likely means being surrounded by people using electronic devices that exclude them from any here-and-now community, lonely or otherwise. We know that many of them/us are doing this in an effort to have friends, to be in community, all the while missing possible opportunities to connect with people present in the same room. How might this development change the dynamics of a place like the automat?

De Botton writes about his own bad feelings being transformed while sitting in similar place, into a “gentle, even pleasant kind of loneliness,” and he values Hopper’s paintings that “allowed their viewers to witness an echo of their own grief and thereby feel less personally persecuted and beset by it.”

As I pondered the meaning of loneliness, I thought for a long time that de Botton is trivializing it. Along the way I read various writers on the subject in hopes of understanding everything better. Of course de Botton writes from his own experience, and it must be that his own feelings are not on the level of acute alienation, nor is he destitute of support, to use some synonyms. If he had known what some people feel as catastrophic and terrifying, what John O’Donohue, in Anam Cara: The Book of Celtic Wisdom, calls “…the solitude of suffering, when you go through darkness that is lonely, intense, and terrible. Words become powerless to express your pain…” I don’t know that he would make these fairly easy remedies, such as looking at paintings and riding on trains, sound plausible.

De Botton is such a pragmatist, as evidenced by his use of religion, that if he had in fact suffered an agony of soul I would expect him to be one of the many people who tell us that loneliness is the human condition. Get over it, make use of it, learn to live with yourself and with the knowledge that you are completely alone and there is no fixing it.

Even Jesus was lonely, after all. In his darkest hour, when he might have taken some comfort from his friends at least standing by, they fell asleep and left him all alone and feeling forsaken. And this shows that he did take on the whole of the plight of being human.

It’s an aspect of our lives that we in the modern age are especially prone to and sickened by, but it’s not what we were made for. We were made in the image of God, The Holy Trinity, where all Life resides — God in three persons, a unity of Love, as Bishop Timothy Ware explains in his book The Orthodox Church:

Our social programme, said the Russian thinker Fedorov, is the dogma of the Trinity. Orthodoxy believes most passionately that the doctrine of the Holy Trinity is not a piece of ‘high theology’ reserved for the professional scholar, but something that has a living, practical importance for every Christian. Man, so the Bible teaches, is made in the image of God, and to Christians God means the Trinity: thus it is only in the light of the dogma of the Trinity that man can understand who he is and what God intends him to be.

God is personal, that is to say, Trinitarian. This God who acts is not only a God of energies, but a personal God. When man participates in the divine energies, he is not overwhelmed by some vague and nameless power, but he is brought face to face with a person. Nor is this all: God is not simply a single person confined within his own being, but a Trinity of three persons, Father, Son, and Holy Spirit, each of whom ‘dwells’ in the other two, by virtue of a perpetual movement of love. God is not only a unity but a union. 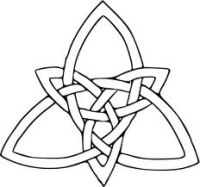 If all the humans you know fail in their love toward you — and they likely will — and if you feel alienated from society, from God, even from your true self, your salvation does not lie in accepting this situation as All There Is. As St. Augustine said, “Thou hast made us for thyself, O Lord, and our heart is restless until it finds its rest in thee.”

In the Church we can be brought into communion with the Holy Trinity and with other people who are learning to participate in that “perpetual movement of love.” This is the opposite of alienation, but we may have to go through the Valley of the Shadow of Death to get there. If that’s what it takes for us to realize our need, and to become desperate enough to cry out to the only One who will never disappoint us or hurt us, we might consider it the power of a great melancholy.

This is the fourth in a series on The Art of Travel. The other posts are
Introduction
Possessing Beauty
What Van Gogh Can Do