When I was “newly illumined” in the Orthodox faith, my spiritual father recommended the books on prayer by Metropolitan Anthony Bloom. One thing I got from Metropolitan Anthony was the blunt truth that praying is uncomfortable, even scary, but it’s the source of our true life. It’s what we were made for. No matter how many times I read transcriptions of his talks — I think all the books we have by him are actually from homilies or lectures — I am always, always struck by the way he conveys the deep love of God with honesty and simplicity.

Today is the anniversary of his repose in 2003, his falling asleep in Christ and passing from death to life, and in his memory I am offering an excerpt from one of those books:

“Because we don’t know yet how to act without an outer reason, we discover that we don’t know what to do with ourselves, and then we begin to be increasingly bored. So first of all, you must learn to sit with yourselves and face boredom, drawing all the possible conclusions.”

In the Orthodox Church, when we celebrate a feast commemorating an event in our salvation history, such as Pentecost, also known as Holy Trinity Sunday, it is followed directly by another feast honoring a person who figures heavily in the previous day’s event. In the present case, tomorrow is Holy Spirit Day. It seems a good time to post these thoughts from Metropolitan Anthony:

When we say that God is spirit, we say simply that he is not matter as we know it, that he is something quite different. In that sense it is a negative description that belongs already without the word, to that form of theology which is negative theology, apophatic theology, a theology of paradoxes, a theology that uses words to point toward the ineffable — that which can neither be described nor put into words and yet which must be indicated somehow in speech.

One could avoid speech. In Siberia there were pagan tribes that had deliberately rejected every human word for God. And when in conversation they wanted to indicate God they raised their hand towards heaven. This is possible in a civilization of direct communication by speech. It is no longer possible in a civilization of books. But whatever words we use we have got to be aware of the fact that we are not describing, we are not defining what God is, because the very thing we know about God is that he is beyond defining, beyond describing. So that when we say of God that he is a Spirit, when we speak of the Holy Spirit in particular, we do not mean to give a concrete definition or any description of what he is. We point towards the fact that he is beyond our conceptual knowledge, beyond every formulation, that is is what we don’t know, and this is what we mean to say by saying that he is a spirit as contrasted with us.

–Metropolitan Anthony Bloom, excerpt from “Our Life in God,” from Essential Writings 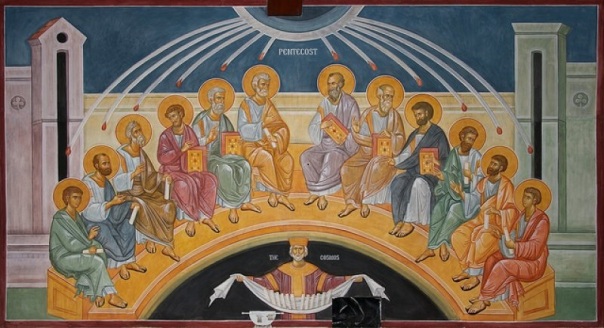 Below are encouraging words from Metropolitan Anthony Bloom, prefaced by a few of my own Holy Saturday thoughts from six years ago, when I was freshly bereaved of my husband. I will leave that mercifully dated personal context as is, though it is for the more enduring words of Metropolitan Anthony that I am re-posting:

I find myself in a phase of grief where from time to time during the day I feel acutely lost without my husband, the absence of him like a soreness in my spirit, an ache in the middle of my chest telling me that something is very wrong with me. Yes, something is wrong!! It’s death that is wrong – it’s wrong for us to be separated, for me to lose the heart of my heart. I have known this truth in my mind and for the world generally – now I understand it in my bones. 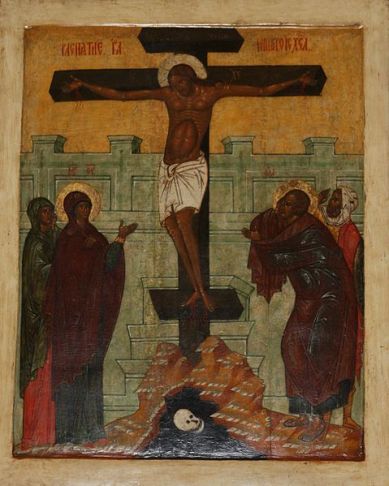 But as I’ve said here more than once already, I have the peaceful assurance that we are not absolutely separated, and a huge thankfulness as well that neither of us has been cut off from the Source of our life and existence. Sometimes we humans use the figure of speech that we will “die of grief,” because it feels that wrenching. But I know even as I am feeling it and railing against it, that I will live through it. This is all because Christ suffered for us, and he overcame death. My pain is like a pinprick compared to what Christ endured on our behalf. As for my husband, “Blessed are the dead who die in the Lord.”

These words from Metropolitan Anthony Bloom that I first read in God and Man two years ago are even more meaningful to me on this Holy Saturday:

When in the Apostles’ Creed we repeat “And he descended into Hell,” we very often think “That’s one of those expressions,” and we think of Dante and of the place where all those poor people are being tortured with such inventiveness by God. 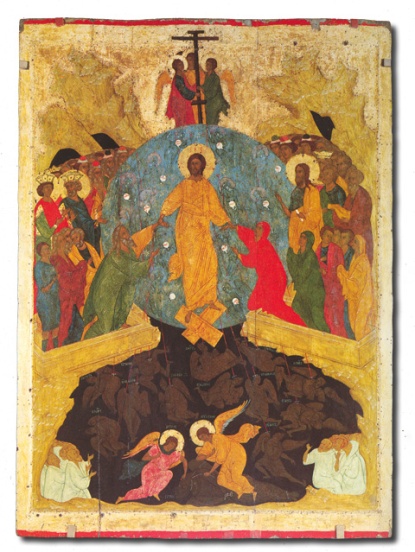 And when we say that he descended into Hell, we mean that having accepted the loss of God, to be one of us in the only major tragedy of that kind, he accepted also the consequences and goes to the place where God is not, to the place of final dereliction; and there, as ancient hymns put it, the Gates of Hell open to receive Him who was unconquered on earth and who now is conquered, a prisoner, and they receive this man who has accepted death in an immortal humanity, and Godlessness without sin, and they are confronted with the divine presence because he is both man and God, and Hell is destroyed — there is no place left where God is not.

The old prophetic song is fulfilled, “Where shall I flee from thy face — in Heaven is thy throne, in Hell (understand in Hebrew — the place where you are not), you are also.” This is the measure of Christ’s solidarity with us, of his readiness to identify himself, not only with our misery but with our godlessness. If you think of that, you will realise that there is not one atheist on earth who has ever plunged into the depths of godlessness that the Son of God, become the Son of Man, has done. He is the only one who knows what it means to be without God and to die of it.

“Beginning [this week], Orthodox Christians abstain from meat; has it any meaning apart from the ascetic, the disciplinary? Yes, it has, I think. There is a frightening passage in the ninth chapter of Genesis. After the flood, when mankind has become even weaker than before, less rooted in God, more tragically alone, more tragically dependent upon the created because it has lost communion with the uncreated, God says to Noah and his people:

“‘From now on all living creatures are delivered unto you as food; they will be your meat, and you will be their terror….’ That is the relationship which human sin, the loss of God in our lives, has established between us and all the created world, but particularly, in a particularly painful, monstrous way with the animal world. And our abstention from meat in the time of Lent is our act of recognition; it is also — oh, to such a small extent! — an act of reparation. We are the terror of the created world, we are those who destroy it, we are those who mar and pollute it, yet we are called originally to be its guide into eternity, into God’s glory, into the perfect beauty which God has intended for it.

“We were called to make of this world of ours God’s own world, God’s own Kingdom — in the sense that it is His family, the place where He lives among His creatures, and where the creatures of God can rejoice in Him and in one another. Let us therefore, to the extent to which we are faithful to the call of the Church, remember that apart from being an act by which we try to free ourselves from slavery to the material world, our fasting is an act of recognition of our sin against the world and, however small, a real attempt to make reparation for it, bring a testimony that we understand, that we are heartbroken, and that even if we cannot live otherwise, we live with a pain and a shame, and turn to God and to the world, which we treat so atrociously, with a broken and contrite heart. Amen.”

See more of the icon here.