One of my favorite categories and species of food is Cucurbita, that is, its squashes I have known; in the garden that’s nearly all been zucchini and butternut. But last month I got a vision for pumpkins trailing the paths of next summer’s garden. After browsing seed vendors online and debating with myself till my eyelids drooped, I narrowed the field to two romantic French varieties. Probably their long French names contributed to their appeal. One is often nicknamed the Fairytale Pumpkin and the other the Cinderella Pumpkin. But those names are not consistently applied.

Did you know that there is no botanical category for pumpkin? It’s more of a cultural or linguistic grouping, and at least in English seems generally to be based on its shape. The majority of pumpkins are Cucurbita pepo, but there are pumpkins in the C. maxima and C. moschata species groups, too.

In this Wikipedia photo, they note that the two bright orange ones in center right are C. pepo, and all the others C. maxima. The botany of squashes, as seen in brief on that Wiki page, is complex and historic!

The one above is what I bought this year at Trader Joe’s, and it was merely called “Heirloom.” I think it is a Rouge Vif D’Etampes. Last year I found one at a farm stand, and was impressed by its sweet, deep orange flesh.

I decided on seeds for the Rouge, but it was nip-and-tuck until the end between it and the lovely Musque de Provence, which is a Cucurbita maxima: 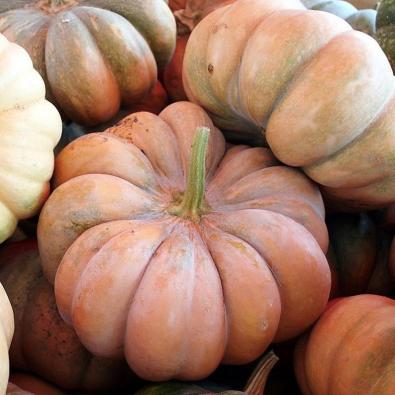 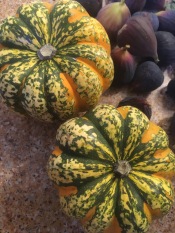 Last week I tried these Carnival squashes and my goodness, aren’t they tasty, right down to their crispy and colorful skins. I began to wonder if I should plant them to grow on my trellis….

But they do say that of all the Cucurbits, butternut squash are the best keepers. I must keep that in mind; after all, I want to store other things in my freezer besides squash.

It’s the time of the year when I start to have wood fires — now in my new stove, an Ironstrike — and to discover how many flannel nightgowns need patching or cannibalizing. Always the sleeves, at the elbows, get thin and holey while the rest of the garment is just fine. All of these pictured have the same need for mending, and only one of them is too far gone, so I will use pieces of it on the others.

Four newly refurbished nightdresses will be restored to use, after having sat in a basket, some of them for years, poor neglected things.

A church in southern Oregon, at which I have worshiped at least twice, is renting space in a strip mall while they work on building their permanent temple. In this year’s Alameda Fire much of the town of Phoenix, St Gabriel’s current locale, was burned, but their space was untouched. Here is a photo of the land where the new church is going in. The fire came so close to the icons and cross marking the spot, I thought it worth sharing:

I put my air purifier in the closet today, and thought, Wouldn’t it be so truly normal if I don’t need it next year…. We are getting a little rain this weekend, and cozying up to the hearth. 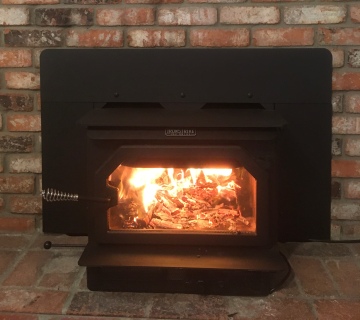