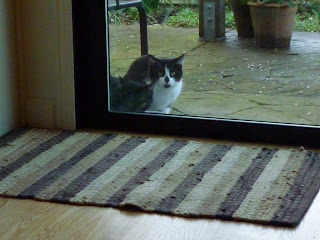 Springtime, and the cats are caterwauling. Jim has a cute little girlfriend. Last week they were sporting together on the patio as we ate dinner, but this week he ran away when she came to eat the food I put out for him. She was stalking him at the dish today, so I went to get my camera. When I came back it appeared he was sharing his food with her. How sweet!

I was cooking while they were eating. For Orthodox this is the week before Lent proper, and we start the Great Fast on Monday. But as we like to ease into things, we already are fasting from meat as of last Monday. Some call this Butter Week, and some say it is a fun time. Perhaps I’ve always been on a trip or otherwise distracted before, during Cheese-fare Week; this is the first year I have enjoyed it this much. But anytime you highlight butter, for me that is fun.

Oh! Jim lifted his head, and it wasn’t Jim at all. It looks like Girlfriend’s sister….maybe Jim has two girlfriends! I wonder if he ran away from fright or just to be gentlemanly. Mr. Glad doesn’t really want me feeding all the cats in the neighborhood, so after I took their picture I brought the food inside until Jim comes back. It was the second time today I tried to feed only Jim and he got chased off. 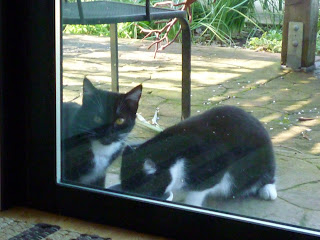 My husband is o.k. with butter, and even cookies. He just told me that if a cookie is really good, he will even eat two in one day. This moderation on his part doesn’t jive very well with my own Cookie Monsterish behavior and the fact that there are only the two of us here now. So I rarely bake cookies.

But, two of my friends revealed their Freezer Cookie Ball method. I thought it would be the perfect solution to the alternate problems of me eating up all the cookies before Mr. Glad could get to them, or the cookies going stale on him. I can bake one sheet full, and freeze the rest of the dough for baking later.

I forgot that I also like to eat the dough. I’m a little shy about admitting it to the world, because my husband thinks it is the most base behavior, something like eating cat food, maybe, only more repulsive.

My sisters and I ate cookie dough as children, but I consumed the most ever in one summer between college semesters, when all three of the girls in my apartment agreed on our favorite cookie: mint chocolate chip. And we all liked to eat half the batch before it went into the oven or was even dropped on the cookie sheet.

I know that in modern times, we are cautioned against this because of the raw egg in cookie dough, but as this is nearly the only risky behavior I indulge in, and that rarely, I hope you will allow me. 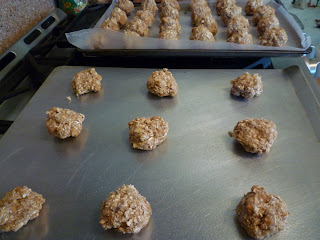 So I confess that just freezing the dough doesn’t ensure that my man will have a cookie when he needs it. Luckily I also had the bright idea of freezing already-baked cookies, one to a waxed paper bag, so when he is so inclined he can defrost one in a jiffy.

Butter Week is still here for now, so I made a fresh batch of these cookies. I baked nine and crowded the rest onto a sheet to quick-freeze. It’s an adaptation of the Oatmeal Scotchies on the Nestle butterscotch chips package. I think it might be improved by doubling the recipe except for the butterscotch chips. Even though I left out half the sugar, the cookies are plenty sweet because of the high density of chips.

1 1/2 cups spelt flour, white and/or whole-grain (if you use wheat, use only 1 1/4 cups, because wheat flour absorbs more moisture.) 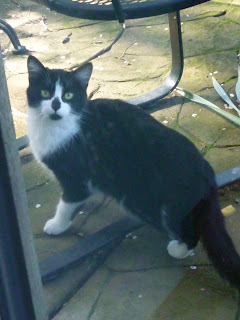 Mix as usual for cookies, adding nuts and chips at the last. Bake about 10 minutes at 375°F.

11 thoughts on “Buttery Week with Cats”