The abundant rain made January of 2017 less depressing than average for that dark and cold month of the year. It looks likely that my town will have received 40 inches for the season-to-date before the end of the week. Usually we get 20+ inches. When it rains the air is cleared of pollutants and the burn restrictions are lifted – so we had lots of wood fires which are always cheering! 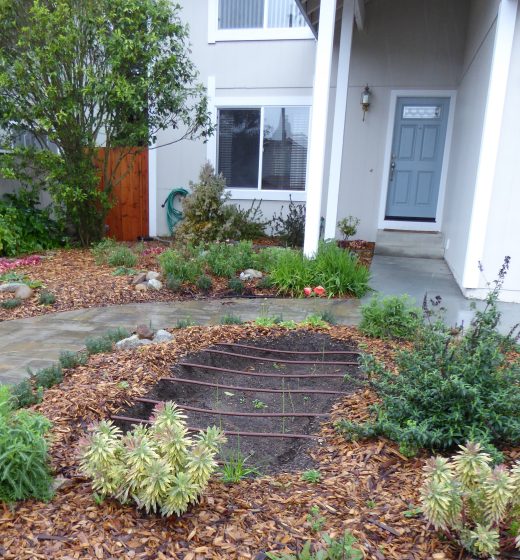 Christmas joy and lightness always carry me through Theophany on January 6th, but then I have the reality of a Christmas tree that needs taking down eventually. I strained my shoulder slightly a few weeks ago, which slowed me down, but it gave me time to read five books in just the first month of the year, often sitting in front of that woodstove. I started drinking coffee, which is a mood-elevator for sure… and now suddenly, it’s February, and the weather has been 20 degrees milder.

Flocks of goldfinches and juncos have returned to the garden, swooping down from the bare branches of the snowball bush. The juncos peck around on the ground, and the finches hang all over the nyger seed feeder, even in the rain.

are coming on dear Margarita Manzanita, buds on the currant bushes and calla lilies. I went out and took pictures just now under the umbrella, so everything is too wet to be optimal, revealing how one of my asparagus beds is less than optimal – we didn’t dig down deep enough into the adobe clay, and now there is standing water. That may not portend good for the future of that planting.

I made several gallons total of various soups in January, including Barley Buttermilk Soup, which I decided to try incorporating into bread yesterday. Here you have it, Barley Buttermilk Bread. It was enough dough that I ought to have made three loaves of it, but what I did was bake one oval loaf on my pizza stone, with butter brushed on top toward the end, and a round one in the Dutch oven. I added some oat flour which made it soft, but by this morning its crumb is very nice, and I like it very much… even too much. 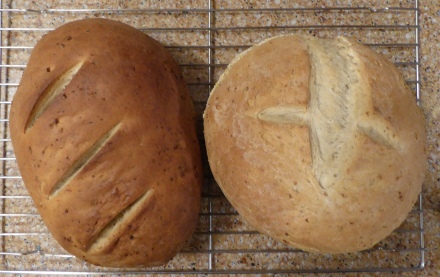 It’s been a long time since I had eggs from hens who ate lots of greens. My fellow communion bread-baker James brought some pale blue-green eggs from his Americaunas to our last baking session, and I was the lucky one to take them home, just as he had brought them, in the bottom of a paper shopping bag. They are so wonderfully orange-yolked, I had to take their picture, too. They go well with Barley-Buttermilk Bread. 🙂

But they keep growing and blooming. Overall, they appear to thrive in it. I am reminded of this verse from the hymn “O Worship the King,” which likens God’s provision for us generally to the moisture that falls.

Thy bountiful care, what tongue can recite?
It breathes in the air, it shines in the light;
It streams from the hills, it descends to the plain,
And sweetly distills in the dew and the rain.

Sometimes, it is not only a metaphor.

13 thoughts on “What streams and shines.”