Not only did I see a rainbow this afternoon, but egrets, and a flower that looks like a sea anemone. A hawk on the power line, and a feast of rosemary blossoms.

When I returned from my extended trip — eight weeks away — I was flattened not only by jet lag but by various other ailments that kept me from even thinking of the creek path until the last couple of days. Today I had taken care of enough business that I could envision and plan for some walking in my afternoon. 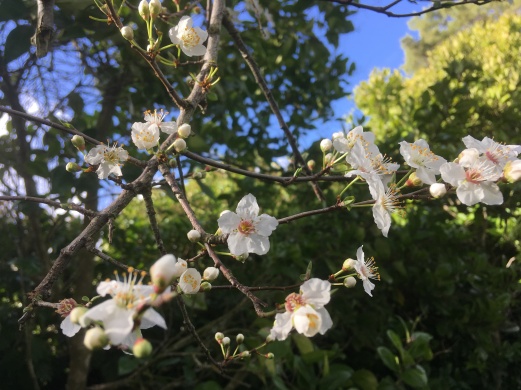 At first, I thought I had waited too long, and that the rain would catch and soak me. My first few pictures I took through some falling drops, and at one point I turned around to come home early, but then I turned around again and had a proper long meander. I didn’t dare go faster on my legs that are much underused these last many weeks.

Neither strolling around the garden or worshiping in church had made me feel so fully “back” as walking my usual route along the now-muddy stream and singing “St. Patrick’s Breastplate” in the proper setting. Somehow, when I get out there I get quickly in touch with my contingency, and that puts me in my proper setting. 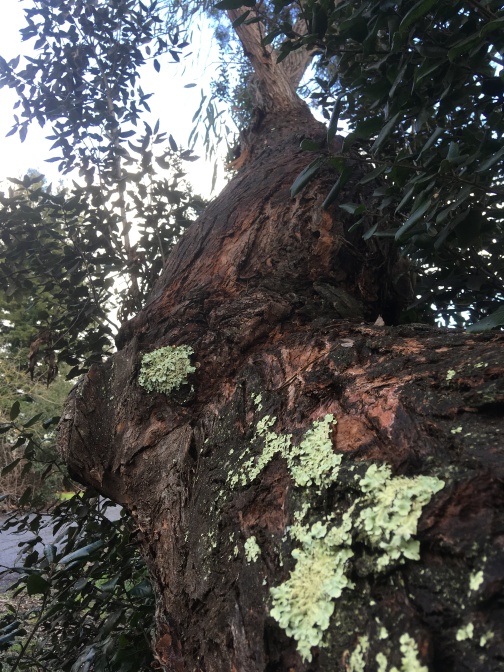 “For in him we live, and move, and have our being; as certain also of your own poets have said, For we are also his offspring.” (Acts 17:28) Being alone in my room does not so strongly impress upon me my aloneness with God and my utter dependence on Him for life itself. For Life itself. My familiar walk is like a familiar prayer that lets me forget the particular words or interface, and go straight to the heart of the matter. 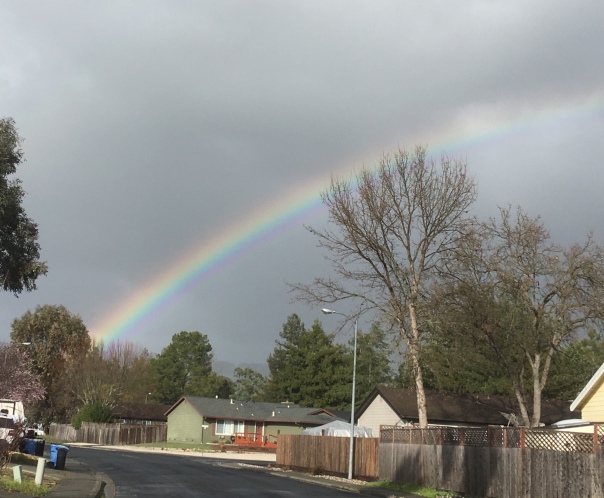 Years ago a man named David Dickens was writing a poem almost every day which he published on a blog. I saved some of them because whether or not their form was polished, their spirit called to my spirit. Like this one, which because it includes images of rain and paths and walking, in the context of exuberance, seems about right for today. Thank you, again, David!

Praise him who rains scorn upon the scornful, and
Let him who gives grace to the humble be praised.
Extol the one who shames crafty men in their schemes
And seeds the garden of those without guile.
Listen to the word, the father’s instruction;
Be attentive, the mother exhibits a watchful heart.
Beautiful are the paths of the maker,
Keep to them and live.

Shout for joy, you who know the one you speak of,
In the house preserved eat a feast with hearts glad.
First in all the spheres of heaven is love
The second is wisdom which uphold the third, peace
Fourth is faithfulness made perfect in suffering
Fifth the gift of tears with her sixth sister, joy
The seventh and last humility, the fortress of all goodness

Great is he who walks unhindered, and to
The one who makes fleet your steps, give glory.
The sky is always clear to shine as no branches cloud his path.
Refreshing waters flow beside and the fawn drinks deep the cool water.
Fear not the wicked forest though it encroaches,
But praise him who keeps the wolves from the camp at night.
Lord and master grant us safe passage,
And rest in your home.

11 thoughts on “the familiar watering”