Over the weekend I got another batch of sourdough going. This particular  make-it-up-as-you-go recipe included rye, whole wheat and unbleached flours, and potato flakes. I started what I call the sourdough sponge on Friday afternoon, and took the bread out of the oven Monday afternoon.

Most of the three days the sponge sat in a bowl on my kitchen table getting more and more sour. It was essentially a big batch of starter itself by Monday. After I added the last ingredients it took a few hours for the final proofing, shaping, and baking. 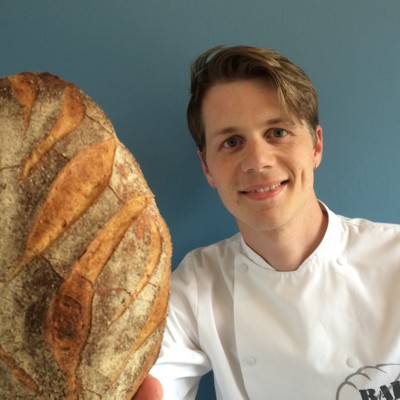 I watched a couple of videos of how to shape “high hydration dough.” Before its final rising you don’t want to add flour if you can help it, because that will spoil the lovely “custard” crumb you are aiming for. It’s a challenge to keep the fairly runny dough from just flattening out on the baking sheet. I liked the YouTube videos “Bake with Jack,” because Jack’s attitude and accent are entertaining; he does talk a little too much about the Why but eventually he gets to demonstrating the How, which is, after all, what I watch a video for. As in “How to stop your dough from spreading out flat!”

Another baker man on YouTube — they seem to be 80% men — poured his white and incredibly wet, stretchy dough out on a board and used a wide putty knife to cut it and and scoop it around, tucking the sides under in a series of rotating sweeps to get the lump shaped into a beautiful ball (boule) with a tight “skin.”

I went into the garage to dig around and found an almost identical putty knife, and it was even stainless steel, so I scrubbed it up and tried it out, but it seemed that the structure of my dough was heavy with ingredients low or lacking in gluten. It would not tighten up. I put the half I had tried to shape on a pizza stone anyway, and poured the rest into a large loaf pan. It was a total of about five pounds of dough.

How pleased I was to see that the free-form loaf got some height soon after it went into the oven at 450°. It must have held more tension than was obvious. My slashes in the top were so timid and shallow as to nearly disappear in baking, but that loaf has a nice shape and didn’t crack along the sides.

The pan loaf, on the other hand, had needed me to use the razor blade with a fearless will. Next time I will try to envision one of the Three Musketeers with his sword, and be brave. Swoosh! But right now, I have a loaf with a horizontal fault line along which the slices break, not quite halfway down. This makes the bread annoyingly inconvenient for toast or sandwiches. Enter the Brick Trick.

The section on “How to Slice a Brick” in Laurel’s Kitchen Bread Book is written for those times when your loaf of bread for some reason does not get height, yet you want to get more useful and normal-looking slices out of it. I thought this technique would work for at least the bottom half of my loaf, so I wrapped it in foil overnight to allow the crust to soften a bit, and in the  morning I went at it.

I didn’t know what would happen when I got to the upper part of the loaf, but I was able to slice along the “fault line” so that I ended up with 10 large square slices with only two crusty edges each, and five “heel” slices, two of which started out as the bottom of the loaf, and two of which are from the top. (Plus the heel I ate fresh from the oven.) I can see eating all those crusty edges myself, as well, so it looks like there will not be more than a few crumbs wasted.  🙂

I ate one of the thick Super Heels this morning, and I’d say I’ve never tasted better toast. Yesterday I had been feeling silly for giving “so much” effort to my Sourdough Project, even though the time commitment is not that great; bread spends a lot of time on its own in and out of the oven, giving the baker plenty of freedom to work on other tasks.  This whole episode has only made me want to keep experimenting and having fun in the kitchen. Not to mention I need more opportunity to work on my sword skills!

19 thoughts on “Tension, flatness, and bricks.”