At the Feast of the Presentation of Christ in the Temple, we bless candles in church. I liked this letter from Abbot Tryphon in which he reminds us that the Light of Christ is what our lamps and candles represent, and what makes the saints shine:

“Vigil lights are placed before the icons of the saints, according to Saint Symeon the New Theologian, as a way of showing that without the Light, Who is Christ, the saints are nothing. It is only as the light of Christ shines on them that they become alive and resplendent.

“The saints show us what a glorious destiny we have in God, and through the example of their lives, point the way to our becoming “partakers of divine nature.” The saints, as the cloud of witnesses in heaven, are present in the divine services, worshiping the Holy Trinity with us. They, as our friends, intercede before the Throne of God on our behalf, having won the good fight, and we are encouraged by the memory and example of their lives, as we struggle on our own path to God.

“It has been said that there are two kinds of people in the world: sinners who think they are saints, and saints who know they are sinners. A saint is a Christian who lets God’s light shine through, and whose life has been transformed by the power of the Holy Spirit.

“We venerate the saints as we seek their intercession with God, but we adore and worship only God in Trinity, the Father, the Son, and the Holy Spirit. We venerate the images (icons) as well as the relics of the saints and martyrs. Yet according to the decisions and Canons of the Seventh Ecumenical Council, this veneration relates not to the icons as such, but to their prototypes, or to the persons whom they represent.

“The interior walls of our temples are adorned with the icons and frescoes of the saints as a reminder that we are surrounded by the cloud of witnesses, the saints, and that the Church Militant (here on earth) is not separated from the Church Triumphant (in heaven). In Christ, death does not divide us, for the saints are not dead, but alive in Christ Jesus.

“Glory to Jesus Christ, Who is glorified in His saints.

“With love in Christ,
Abbot Tryphon” 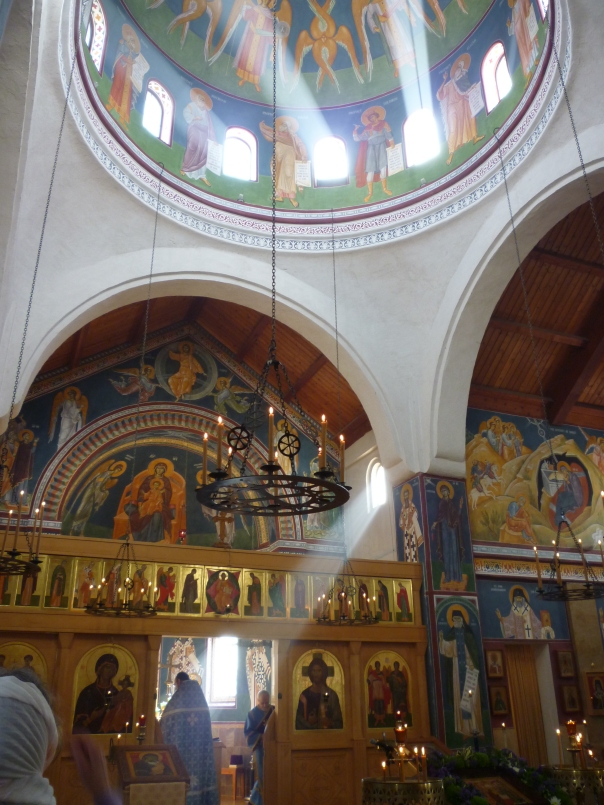 Lighting candles before Vigil this evening, for the Feast of the Presentation of Christ in the Temple. This commemoration marks the end of the Christmas season, when 40 days after birth Jesus was presented in the temple in Jerusalem to fulfill the law of Moses. The Prophet Simeon knew by the Spirit that the child was the Christ, the Messiah, and he took him in his arms and said,

“Lord, now let Thy servant depart in peace, according to Thy word, for mine eyes have seen Thy salvation, which Thou hast prepared before the face of all people: a Light to enlighten the Gentiles, and the glory of Thy people Israel.”

a long time I’d been hoping to keep St. Brigid’s Day with some kitchen activity; I even programmed the idea into my online calendar and every year toward the end of January the e-mail reminder arrived, “If it’s not a fasting day, make Irish food.” As the day came and went year after year, always on the eve of a major feast of the Orthodox Church, there was never time or energy to enact my plan. Until this year. 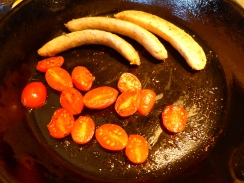 I had invited my goddaughter Sophia for a birthday brunch on February 1st, and when I started planning the menu I realized that we could remember St. Brigid at the same time and have an Irish theme to the food. 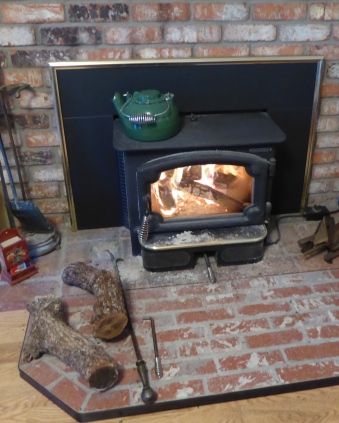 St. Brigid’s Oaten Bread would be the center of the spread, and I found many recipes for it online,  all  identical. I added a few more menu items imitating an “Irish Breakfast,” which I know was not perfectly authentic, but we relished the bread and everything else, warmed by a good fire in the stove and drinking Irish Breakfast tea to boot.

Next year I might incorporate more of the Celtic traditions surrounding St. Brigid, including the fact that February 1st is considered Celtic Spring, and the custom of not bringing snowdrop flowers into the house until that day. From Heather’s comment on my snowdrop post, and from other sources, I learned more about the saint and the season just after my party. I didn’t even think to bring snowdrops into the house on that Celtic spring day, because I had so many flowers left from our house blessing the week before.

Confession: I actually did alter the bread recipe a bit, partly because I had an egg yolk left over from making these Candied Espresso Walnuts (a food that would have been strange to St. Brigid). I thought she would have thought it natural to use the extra yolk in the bread, because a farm girl like her would not waste it. And she would not blink an eye when she saw me adding an extra tablespoon of butter; I know this because more than one story about her reveals her appreciation of this wonderful food. Sophia and I blessed our Brigid’s bread by spreading extra butter on our thick slices.

The next day after St. Brigid’s we would commemorate the Presentation of Christ in the Temple, which is also called Candlemas because we bless candles. This year our rector mentioned Groundhog Day and its marking of shadows. He noted that because we came to church, we ourselves saw no shadows, only the Light of Christ shining in the world.

I like what Macrina Lewis wrote recently about these days and others through the church year:

…many of our major Christian feasts hearken back with echoes through prior centuries to pre-Christian religious and cultural celebrations, often tied closely to the earth and to the earthly rhythms of human life: birth, death, harvest, preparation, feasting. In the illuminating glory of the sa 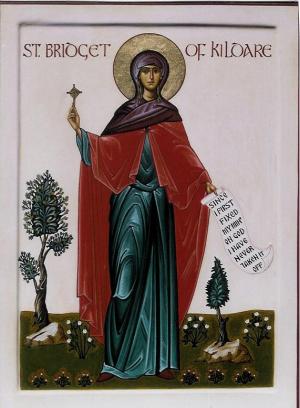 ints’ lives and the liturgical expression of the church, these feasts, these divine seasons, have been revealed in their fullness, elucidated and offered as a way for each of us to personally participate in their mysteries directly. What was formerly in shadow…has been illumined with the knowledge of faith and the fullness of God’s presence.

Thinking about those earthly rhythms, I have to say that the darkness of January did not get me down this year as it has tended to do in recent years, and I wonder why… Is it because I have so much work to do? Just watching the birds through the window as they explore my new garden must elevate my mood. Certainly being part of a worshiping community, right here in my house, keeps the gloom at the level of something “out there” that we don’t have to partake of; we worked joyfully to spiff up the house and cook a meal together for the occasion of our house blessing last week. The skies have featured rain or wind, which is not the kind of weather that leads to a prohibition of wood fires, and now three of us in one house both appreciate and even build fires almost every day.

I’ve continued to sorrow and to grieve the loss of my husband, but in sharper, briefer episodes than the kind of depression that can come from lack of sunlight. The sadness often comes over me when I’m standing in church, as sitting in my Father’s lap, and He soon comforts me by making me feel all the love and loveliness in His house. Into the darkness of a hurting and wintry world, Jesus Christ shines warm and bright.