In this post I will share two recipes I’ve had waiting in my Recipes-to-Try folder, and recently did get around to. I loved them both. 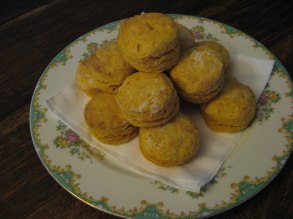 I found Brazilian Cheese Bread here at The Traveler’s Lunchbox. The Portuguese name is Pão de Queijo. These little buns are said to be very popular with coffee for breakfast in Brazil. (The picture at right is not of these rolls. I was afraid that if I didn’t put a colorful picture there you might not keep reading. That picture is of the biscuits I tell about further down.)

There are many recipes for the cheese buns around, with different ingredients and techniques (This one at the San Francisco Examiner looks plausible), but I will tend to stick with the Lunchbox version, as mine came out so good. One thing non-traditional in that recipe is the use of butter rather than oil. And I do love butter. I did cut down on the salt in my recipe, by 50%. 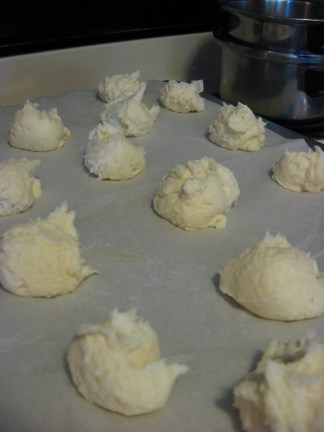 They are quite unusual, in that they are made with tapioca starch rather than flour, and therefore are gluten-free, and chewy.

The first picture I took was of the sticky dough that one puts little globs of on parchment paper. This is the unappetizing stage. But just be patient.

The rolls puff up as they bake, and while mine did come out with some “horns” and such like, they were oh-so-tender and light, while at the same time moist and tasty. I noticed that the Examiner recipe does have you make balls of the dough, which would reduce the prickly nature of the crust somewhat. But my dough was not firm enough for that.

The thin crispy crust broke open to reveal an interior that was not doughy at all, but very cheesy, with a stretchy “crumb.” No need for extra butter or anything. One eater said they were “intense.”

We all noticed the likeness to mochi, the Japanese term for food that is chewy like this and often made with a highly-refined rice flour called mochiko. I think if you like mochi-anything, you would love these buns. I’ll tell you more about mochi in another post.

I put the leftovers in the freezer, even though the original recipes say to only bake as many as you need and to freeze the balls instead, etc. This morning we put them in the microwave for a few seconds and they came out quite delicious. 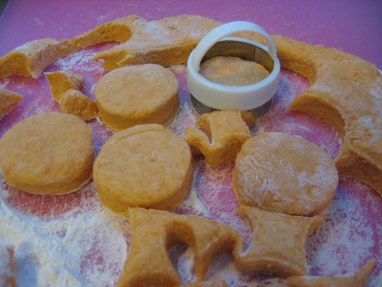 The other recipe I tried last week was Sweet Potato Biscuits. I would be happy to live off sweet potatoes, and because they are almost nutritious enough for that, I like to use them in as many ways as possible.

I was a bit skeptical about how flaky a biscuit could be with the addition of vegetables, but they passed that test. Buttermilk biscuits have been my standby, so these were sweet by comparison, but not overly so. They were enjoyed by all. [lost the recipe somehow while trying to edit it at a later date. Sorry.]

5 thoughts on “Biscuits and Buns”