One thing does not exist: Oblivion.
God saves the metal and he saves the dross.
And his prophetic memory guards from loss
The moons to come, and those of evenings gone.
Everything in the shadows in the glass
Which, in between the day’s two twilights, you
Have scattered by the thousands, or shall strew
Henceforward in the mirrors that you pass.
And everything is part of that diverse
Crystalline memory, the universe;
Whoever through its endless mazes wanders
Hears door on door click shut behind his stride,
And only from the sunset’s farther side
Shall view at last the Archetypes and the Splendors.

Give thanks for all things
On the plucked lute, and likewise
The harp of ten strings.

Have the lifted horn
Greatly blare, and pronounce it
Good to have been born.

Lend the breath of life
To the stops of the sweet flute
Or capering fife,

And tell the deep drum
To make, at the right juncture,
Pandemonium.

Then, in grave relief,
Praise too our sorrows on the
Cello of shared grief.

I decided to post the prayer below, and not an hour later I finally found the poem. I say finally, because I had moved the small volume in which the poem is found, from the bookshelf in one room, to the top of a trunk in another, to a dresser 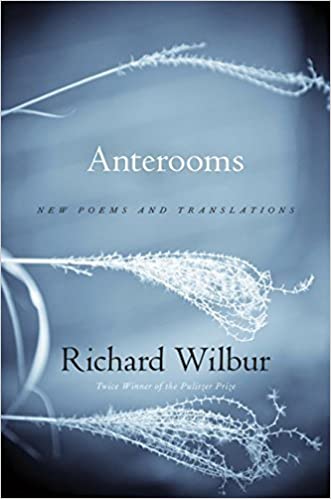 and then a table, over the course of several months, in an absentminded effort to get it downstairs. One morning I managed to carry it down, and another day I followed through on my longstanding desire to open it.

To me the prayer and the poem share the same hope and desire. Doubtless when we get to know our true selves, we will find that we all share this. Richard Wilbur has said that he began writing poems in earnest while a soldier in the Second World War: “One does not use poetry for its major purposes, as a means to organize oneself and the world, until one’s world somehow gets out of hand.”

The older I get, and considering all the ways that my inner and outer worlds have required strong “organizing” by means of writing, the more I might wish I were in the habit of writing poetry. But writing anything and having it come out right is hard enough, at the same ti 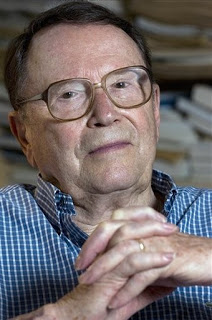 me it becomes more necessary.

Wilbur’s wife died when they had been married 65 years. Earlier, after only 50 years of marriage, he had said: “My wife was the first person it occurred to me to marry, and I was really quite stunned that she felt the same about me. I know that I would be capable of great disorder and emotional confusion if I were out of my wife’s orbit; she really has greatly steadied me.” In this poem he wrote after her death I think it’s significant that he is conscious of setting out for the place, not merely the person whose vision urges him on.

Sometimes, on waking, she would close her eyes
For a last look at that white house she knew
In sleep alone, and held no title to,
And had not entered yet, for all her sighs.

What did she tell me of that house of hers?
White gatepost; terrace; fanlight of the door;
A widow’s walk above the bouldered shore;
Salt winds that ruffle the surrounding firs.

Is she now there, wherever there may be?
Only a foolish man would hope to find
That haven fashioned by her dreaming mind.
Night after night, my love, I put to sea.

The prayer that inspired this post to begin with is in a book newly published by St. Tikhon’s Monastery Press. It contains many familiar prayers from previous Orthodox prayer books, but also some that aren’t 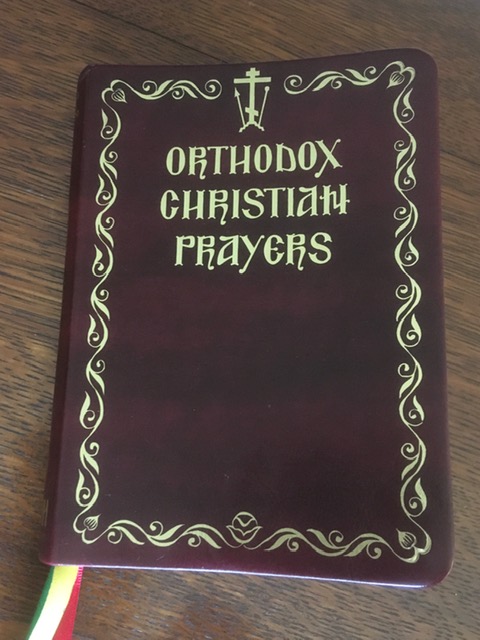 as well known, and a few specially conceived for modern times, such as a prayer “Before Using the Internet,” and a “Prayer Against Insomnia.” One section is titled “The Glorious Majesty of the Lord.” Yes!

I hope to share a few other selections from this collection of Orthodox Christian Prayers, which is beautiful in its binding and formatting as well as its content, but for the first one, it seems fitting that is attributed to the patron saint of the oldest Orthodox monastery in America; their publishing arm gave us this book. It is in a section titled “Prayers for Spiritual Struggle.”

About a month ago ? — hard to say, time is strange right now — when I began to struggle myself with what you might call tormenting thoughts, driven by the social and economic upheaval of the coronavirus pandemic, I also opened this prayer book for the first time, and came upon this entry. In the words of Richard Wilbur, it speedily helped me to organize myself and my relationship to this world. It mentions the feast of Christ’s Ascension, so I waited to publish it now, 40 days after Pascha, when we are remembering that event.

A PRAYER to INHERIT HEAVEN
by St. Tikhon of Zadonsk

With my flesh I worship thine Ascension into heaven, and I pray to thee, my Lord, raise my mind from what is earthly to that which is on high, strengthen my infirmity, and make up for what is lacking and small in me, leading me heavenward unto a good and saving end, unto thee who art in heaven, which is our true home, our fatherland, inheritance, property, wealth, honor, glory, comfort, joy, and eternal blessedness. Amen. 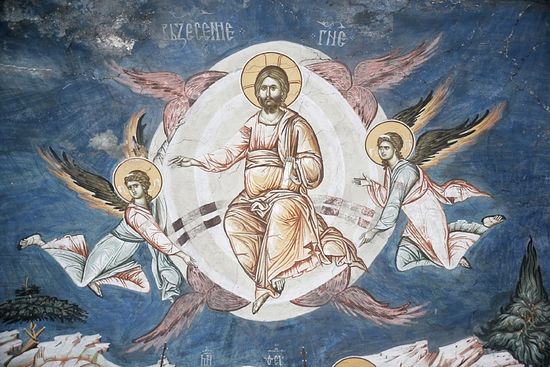 When You did fulfill the dispensation for our sake,
And unite earth to Heaven:
You did ascend in glory, O Christ our God,
Not being parted from those who love You,
But remaining with them and crying:
I am with you and no one will be against you.

–Hymn for the Feast of Ascension 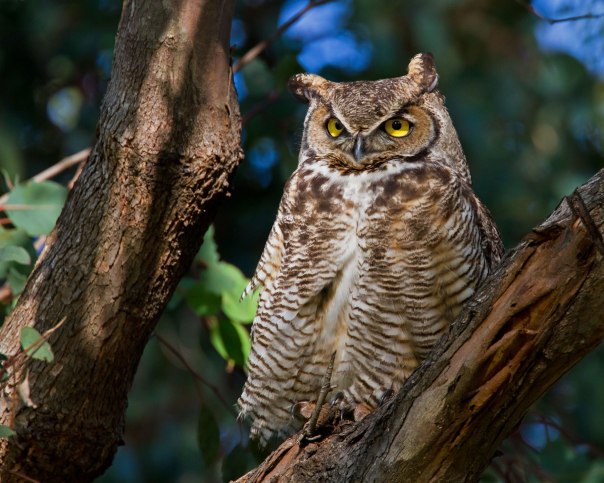 In the late fall I was sitting here at my desktop after dark when I heard an owl in my back yard. I knew it was an owl because he sounded just like the ones in the movies. I don’t think I had encountered one in person ever.

But I didn’t know what species he might be. I spent a good hour listening to various owls on Cornell University’s site All About Birds site, and the owl cooperated by demonstrating his distinctive call many times. He came another night not long afterward. For a while that first night I thought perhaps he was a Barred Owl, but eventually I knew for sure that he was a Great Horned Owl.

In my research I found advice about how to build a platform for this owl to nest on, how high up to attach it, and that it should go up in November so that the owls might find it when they go looking for good nesting sites in February. I did wish that I could start on one more project like that, but it was obviously not the right thing for me this year.

Probably everyone has more familiarity with owls than I do, but if you’d like to hear the calls of five owls this is a helpful Audubon page that limits itself to just that many: Identify Five Owls

You can guess how honored I felt that such a creature had visited me, even if he couldn’t be seen. His voice seemed full of romance, and let me in on the secret drama of the night. Of the five owls on the linked page, his call is surely the most pleasing, low and soft. So many owls are screechy.

Richard Wilbur wrote a poem about an owl’s voice. His own voice is more pleasant to me than that of the Barred Owl that he writes about; maybe that’s why someone came up with the explanation for a child, and why I like his poem so much. You can listen to him reading it: here.

The warping night air having brought the boom
Of an owl’s voice into her darkened room,
We tell the wakened child that all she heard
Was an odd question from a forest bird,
Asking of us, if rightly listened to,
“Who cooks for you?” and then “Who cooks for you?”

Words, which can make our terrors bravely clear,
Can also thus domesticate a fear,
And send a small child back to sleep at night
Not listening for the sound of stealthy flight
Or dreaming of some small thing in a claw
Borne up to some dark branch and eaten raw.