More on rain from GKC:

There is a wild garment that still carries nobly the name of a wild Highland clan: a elan come from those hills where rain is not so much an incident as an atmosphere. Surely every man of imagination must feel a tempestuous flame of Celtic romance spring up within him whenever he puts on a mackintosh. I could never reconcile myself to carrying all umbrella; it is a pompous Eastern business, carried over the heads of despots in the dry, hot lands. Shut up, an umbrella is an unmanageable walking stick; open, it is an inadequate tent. For my part, I have no taste for pretending to be a walking pavilion; I think nothing of my hat, and precious little of my head. If I am to be protected against wet, it must be by some closer and more careless protection, something that I can forget altogether. It might be a Highland plaid. It might be that yet more Highland thing, a mackintosh.

And there is really something in the mackintosh of the military qualities of the Highlander. The proper cheap mackintosh has a blue and white sheen as of steel or iron; it gleams like armour. I like to think of it as the uniform of that ancient clan in some of its old and misty raids. I like to think of all the Macintoshes, in their mackintoshes, descending on some doomed Lowland village, their wet waterproofs flashing in the sun or moon. For indeed this is one of the real beauties of rainy weather, that while the amount of original and direct light is commonly lessened, the number of things that reflect light is unquestionably increased. There is less sunshine; but there are more shiny things; such beautifully shiny things as pools and puddles and mackintoshes. It is like moving in a world of mirrors.

— From “The Romantic in the Rain.”

In spite of our lack of macintoshes, I believe that Pippin and I did feel the romance of our visit to the Highlands and other damp British places, and Pippin gets credit for the photos.

It’s not surprising that people have written poems about roses. Bonnie Prince Charlie made a five-petaled rose the symbol of Scotland, and Hugh MacDiarmid wrote this poem in the 20th Century. He refers in the first line to a poem by Yeats, in which the opening line mentions a “rose of all the world.”

The image is still popular among Scottish nationalists, and as a symbol it’s available as jewelry. U.K. Gardeners who talk about the rose say, “The Jacobite rose dates back to the 16th century, and is the double form of the White Rose of York, Rosa x alba which, in turn, is descended partly from the dog rose, R. canina. It has the same vigour and resistance to disease of truly wild roses, but the blooms have a more cultivated appearance, fragrant and creamy white with charmingly muddled centres.” 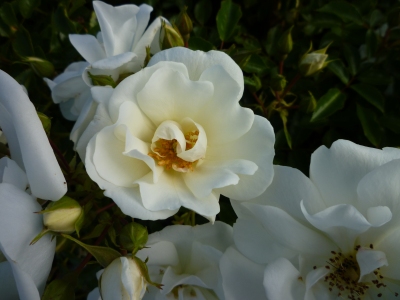 I don’t claim that this rose from my neighborhood is the same, but it looks very like the ones pictured online, and it feels to me able, without the help of any patriotic fervor whatsoever, to break a heart.

Happy St. Andrew’s Day! I had the honor and joy of celebrating the feast in church this morning. Added to the usual liturgy and communion were prayers and song lifting up one of our dear elderly parishioners who died in the Lord early today. Now the memory of his repose will always be tied to this feast.

Andrew was the first of Jesus’s disciples, and centuries ago became the patron saint of Scotland and other countries. I wore my tartan plaid skirt as I always do on November 30th, and this year I had a new purple Celtic scarf to wear, recently brought from Scotland by Pearl.

Some of you might remember that I wrote about this years ago; I’m sorry to say that while trying to repost those thoughts this morning I deleted them instead. Ah, well, it turns out to be a blessing, because the accident caused me to find that just today John Sanidopoulos has written a thorough history of how it happened that the Scots chose this saint for their patron, and his cross for their official national flag. 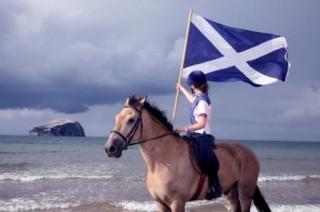 This form of cross is called a saltire and is linked to St. Andrew because he was crucified on a diagonal cross in the first century. I learned that the first use of the X-shaped symbol was on medieval soldiers’ clothing, probably a white image on a black background. And today there are many Scottish nationalistic garments and items that hearken back to this design, like this belt buckle. 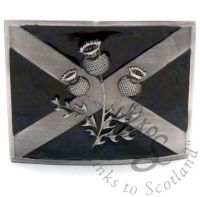 It was only in the last decade that Scotland made St. Andrew’s Day an official bank holiday. The nation also has another flag you might be more familiar with, the Lion Rampant, the unofficial national flag that belongs to the kings and queens of Scottish history. And there is the Union Flag of the entire U.K. Time was, Scotland could not legally fly its official satire on its national holiday of St. Andrew, but that sorry situation has been rectified of late.

These national days and flags have been part of the cultural consciousness since the 14th century, a consciousness that naturally changes from generation to generation. The original and deeper meanings of this cross are probably lost in the background fog of the mind of the nation.  It is encouraging to think that even if they have largely forgotten him and their Christian heritage, St. Andrew continues to pray for the people of Scotland. 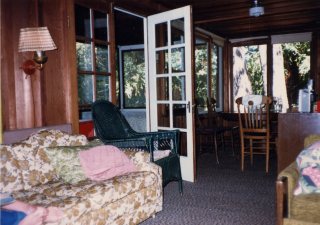 Not long after I met my husband, I spent some time with his family at their cabin in the woods, a humble place called “La Casita.” Later on we took our honeymoon there, and over the years we often visited with our children, using the little house as a base for exploring the redwoods and the beach.

On the knotty pine walls were various odd and antique-y pictures and hangings, things that were too tattered or for some other reason didn’t fit the decor of people’s everyday homes, and one of those was a framed verse by Robert Burns.

Some hae meat and canna eat,
And some would eat that want it;
But we hae meat, and we can eat,
Sae let the Lord be thankit. 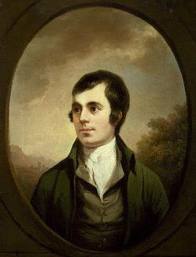 I was charmed by the little yellowed plaque and the thought behind the verse, and always thought that I would like to embroider it to post in my own house. I never did that, and when the cabin was sold and the old hangings became available for the taking, I didn’t even take them. I think that verse had lodged itself in my mind and heart so firmly that the original sighting was superfluous.

Today is the birthday of the poet, a good day to hear him giving thanks and to say about him “let the Lord be thankit.”