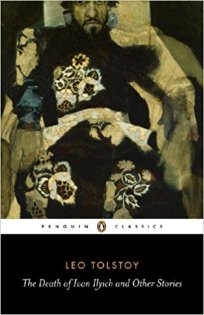 This month our women’s book club at church read Tolstoy’s The Death of Ivan Ilyich, and Sunday afternoon we met at my house to discuss it. That day on the liturgical calendar happened to be the Sunday of the Last Judgment, with the Gospel reading from Matthew 25.

In that passage, before we come to the day’s reading, Christ has been speaking privately to His disciples about the end times, and telling parables. One is about virgins getting enough oil for their lamps, and the other about servants making good use of the gifts they were given. Both parables end with someone arriving and some people not being prepared.

Ivan Ilyich was most certainly not ready for the arrival of his death. He and his friends were like many people in that they avoided thinking about that inevitability. The story opens with the fact of it, and his funeral, which doesn’t affect his friends very much, because thank goodness, it wasn’t their death, so they can go on as they were before. Then the author takes us back to see Ivan’s life over the years, and close to the end when he could no longer avoid suffering, and had to face a reality that didn’t fit into his life’s theme of doing what was pleasant.

The Gospel for the day is sobering, and our pastor reminded us of what his late father, also our priest, used to say, that the task of the preacher is always to “comfort the afflicted and afflict the comfortable.” This passage continues in the thread of being about Someone’s return. Christ, the Son of Man, begins to talk to His friends more directly, if metaphorically:

“When the Son of Man comes in his glory, and all the angels with him, he will sit on his glorious throne. All the nations will be gathered before him, and he will separate the people one from another as a shepherd separates the sheep from the goats. He will put the sheep on his right and the goats on his left.” And by what criteria exactly does He sort them? If you haven’t read that account recently you might want to look at it; the whole process is laid out with much detail in Matthew 25. Our preacher said it is like getting the answers before the final exam.

I was teaching my usual church school class afterward, and read in preparation a sermon by Metropolitan Anthony Bloom that I liked very well; I shared it with the students, too. A quote:

“We are told that when the Day of Judgment comes, those who will stand

before God – and those are all of us – will not be asked about their creed, about their theological knowledge, about their theoretical convictions. They will be asked direct and concrete questions, that can be summed up in one: have you been human, or not?”

Steve Robinson wrote similarly: “The separation is this: Who was paying attention to life itself, our Life in a constant icon before us, and fulfilling the Image in which we are created? Who is, in love and sometimes even in ignorance of the Name of the Image, paying attention to what is ultimately our Salvation now, and ever, and unto the ages, even though we do not know it.”

It is the disruption of Ivan Ilyich’s pleasant life, the pain of his illness, and the growing realization that he is dying, that make him pay attention, and even pray. His prayer is along the lines of, “What did I do to deserve this?” but nevertheless: “Then he was still, ceased weeping, held his breath, and was all attention; he listened, as it were, not to a voice uttering sounds, but to the voice of his soul, to the current of thoughts that rose up within him.”

He begins to consider that perhaps “he had spent his life not as he ought….” Eventually, Ivan “saw distinctly that it was all not the right thing; it was a horrible, vast deception that concealed both life and death.”

This idea of the right thing ties in to what we heard in the homily at church, that God’s judgment is not of the sort we exercise and endure by the same name in the world. His judgment is essentially what happens when the One Who understands everything and is perfect Love sets things right. It would appear that as soon as Ivan prayed the feeblest prayer, his Father began this process.

The end, when it came for Ivan, leads us to believe that he passed from death to life. It did not come without agonizing struggles. He had missed life while appearing to be alive, all the while not preparing for death, which turns out to be the beginning of his true life.

Until they were separated, the sheep and goats had been in the flock together, being cared for by the Shepherd. Steve Robinson points out that sheep and goats alike were clueless about how their fate had been decided; it wasn’t fear of judgment that made the sheep love their fellows and act like sheep — or leaving the metaphor, as the humans God created them to be. Neither did they see Christ in the needy person whom they clothed or fed or took into their homes, but they loved that person anyway.

Metropolitan Anthony ends his sermon with this exhortation: “One day we will stand before Him. He will meet us with His infinite love, but looking at Him we will see that He has been our victim throughout life in the person of every one whom He loved and whom we have neglected, humiliated, rejected, allowed or caused to suffer. And how terrible it will be at that moment to look at Him and know that there is no anger, no hatred in Him, but deep, deep pain. Let us think of that, and remember… if you want to be divine, first be truly human.”

This month our parish women’s book club is reading Tolstoy’s “The Death of Ivan Ilyich.” I finished it this morning, in an old anthology from 1947 that I had kept from our homeschooling years, when twice my late husband and I taught a short story course to our children. That collection is A Treasury of Short Stories edited by Bernardine Kielty. When I closed that volume I opened The Norton Reader, Seventh Edition, to see if it included any Tolstoy stories, but when I saw the title “From Journal of a Solitude,” I continued reading the first few excerpts taken from the book by May Sarton.

Her musings in the first paragraphs were on topics that were also among those so powerfully treated in the story of Ivan Ilyich: depression, dying; the perceived absence or presence of God, both “too frightening.” I don’t have any comments on those themes, but I would very much recommend Tolstoy’s story to your own reading. I thought I had read it before, but maybe I only started once. It is powerful.

I don’t know anything about May Sarton except what I read just this morning, but I appreciated the thoughts below; these came just down the page, after she’d moved on from writing about her dying friend. They are not so obviously linked to the Tolstoy story, except perhaps by their highlighting the need for patience in every stage and situation in life, not least at its end. “By your patient endurance you will gain your souls.” (Luke 21:19)

“In the mail a letter from a twelve-year-old child, enclosing poems, her mother having pushed her to ask my opinion. The child does really look at things, and I can write something helpful, I think. But it is troubling how many people expect applause, recognition, when they have not even begun to learn an art or a craft. Instant success is the order of the day; ‘I want it now!’ I wonder whether this is not part of our corruption by machines. Machines do things very quickly and outside the natural rhythm of life, and we are indignant if a car doesn’t start on the first try. So the few things that we still do, such as cooking (though there are TV dinners!), knitting, gardening, anything at all that cannot be hurried, have a very particular value.”

-May Sarton, Journal of a Solitude