Poetry is sane because it floats easily in an infinite sea; reason seeks to cross the infinite sea, and so make it finite. The result is mental exhaustion. To accept everything is an exercise, to understand everything a strain. (This and all quotes in green below are from G.K. Chesterton.)

I had another title for this blog post, something about pollinators, but when I saw the preponderance of green in the images, it made me think of Tuesday’s poem, which could be talking about my own garden that is wild with leaves and flowers popping out at a mad rate. All the glory does make it hard for me to hold a thought, and there are many I should not let go of — starting with all the outdoor tasks that won’t wait: feeding and weeding and trimming and tying….

But going back to the poem, I’ve been thinking about how it describes the way the most common natural occurrences — after all, “the world comes back” in spring year after year — can confuse and even shock us if we really pay attention. In my yard it seems that between the time I walk from the front garden to the back and return again, a new weed has sprouted or an iris has emerged.

Why have I arrived on the path by the salvia? I don’t even take time to ponder, but I immediately start pulling weeds. Then I return to the fountain and see a honeybee on a flower, and must go into the house for my camera and “waste” a few minutes attempting to record one of the thousands of thrilling things happening here, right outside my door.

There is a road from the eye to heart that does not go through the intellect.

This road leads to the heart from other sensory “gates” as well. My garden seems primarily visual, but also the rich scents of osmanthus and daphne and lavender have their own direct routes to my heart, as do the bird songs. I don’t have to think about them or know their meaning. In the poem about the “Deciduous Spring,” sounds of words are used to mimic the visual symphony or cacophony that all this burgeoning creates.

The poet only asks to get his head into the heavens.
It is the logician who seeks to get the heavens into his head. And it is his head that splits.

This week I will be adding more plants to the mix, and several of them will be of the sort that the hummingbirds and bees and other insects like. Last fall I planted five types of seeds that did not sprout: poppies, milkweed, prairie echinacea… So — I found a native plant nursery where I was able to buy two species of milkweed plants, orange Moroccan poppies, and penstemon. Visions of Monarch butterflies fill my head.

In the picture below of the waiting plants, the milkweed is mostly in the foreground, two types that are native to the western U.S.: Asclepias fascicularis and Asclepias speciosa 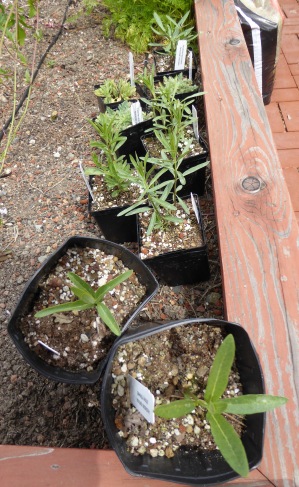 The perplexity of life arises from there being too many interesting things in it
for us to be interested properly in any of them.

To mention a pair of not-green things: The orioles are back! Not in the group that I am trying to attract with certain flowering plants, their preference is sugar water. 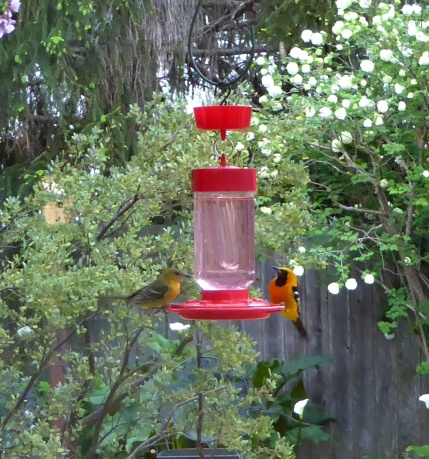 They are very shy, so I’m not going to try to take new pictures of them. This one is from my great photographic effort last spring. 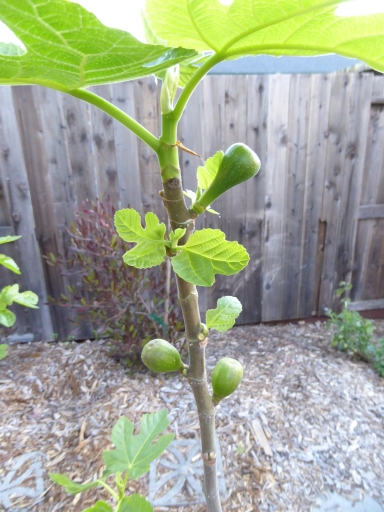 The snowballs on the viburnum are little green things so far. Green fruits are on the fig tree. I ran into a Painted Lady butterfly over there, and bumblebees, but their interest was the lithodora blossoms. 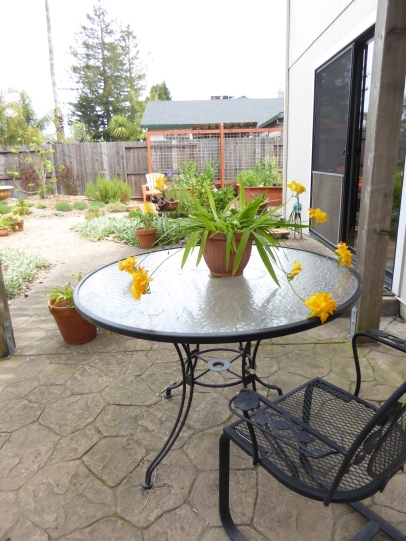 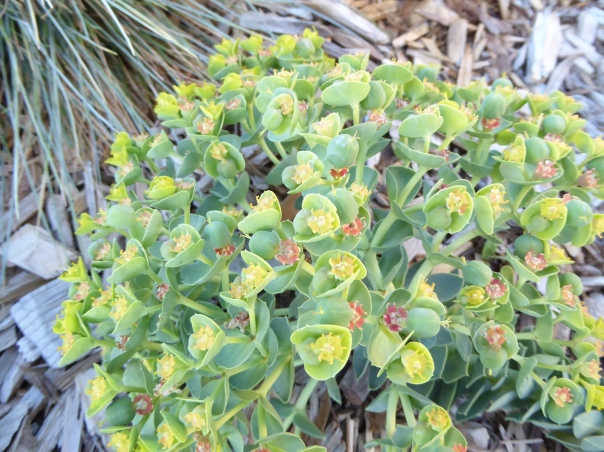 Even the tiny flowers of the Euphorbia myrsinites are swallowed up in their green leaves. 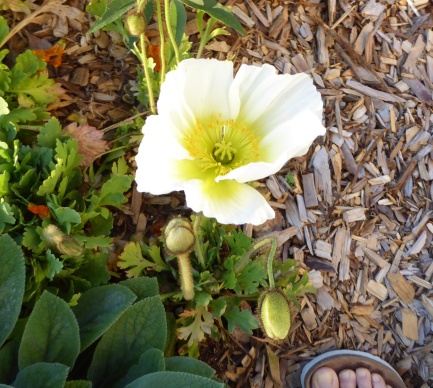 Nearly every day I fall in love again and try to capture another poppy with my camera.
This time my toes got in the picture. At least they are not green.

The whole order of things is as outrageous as any miracle
which could presume to violate it.

And below, I used a clever jar-vase that Mrs. Bread gave me for my birthday, and made a colorful bouquet that will give your eyes respite from green. It is like a little canning jar with a ring that screws on the top, but into the ring is set a florist’s frog, making it perfect for arranging odd little blooms with their often short stems that one finds in a garden like mine. 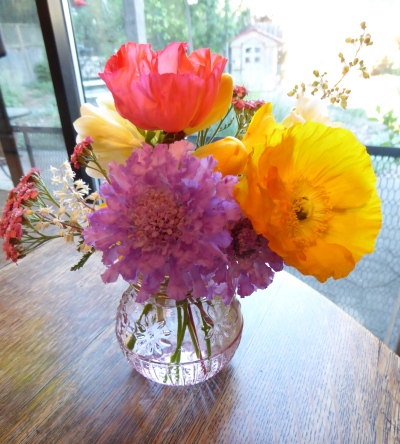 That’s my show-and-tell for today! How does your garden grow?

15 thoughts on “I float on a sea with bangles.” 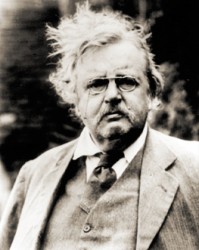