Way back in October, I think, was the last time a certain one of my favorite plant nurseries was open — until Saturday, when I drove over for the reopening. The retail aspect is a small part of a larger sustainable agriculture/ecological/educational project, and is only open on weekends in the warmer months. Over the years I’ve bought lots of annual vegetables there, but lately they focus on perennial edibles and and medicinal plants.

It’s a beautiful drive, out into the more rural areas of my county. I remembered to wear my sun hat to keep my scalp from burning, but when I got into the nursery area itself there was netting all over above, which probably made it unnecessary. Passionflowers bloomed like stars up there.

For an hour I got a huge rush of excitement and energy, as I saw more and more species of perennial salvias and echinacea species that I could take home and add to my pollinator garden. Echinacea Purpurea, Pallida, and Paradoxa. Salvia hians (Kashmir Sage), Salvia forsskaolii, Clary Sage and Dune Sage. The forsskaolii, or Indigo Woodland Sage, I used to have in my “old” garden, but it didn’t survive the transition. None of the new plants is in bloom yet so I’ll show them later after they are revealed in their fullness. 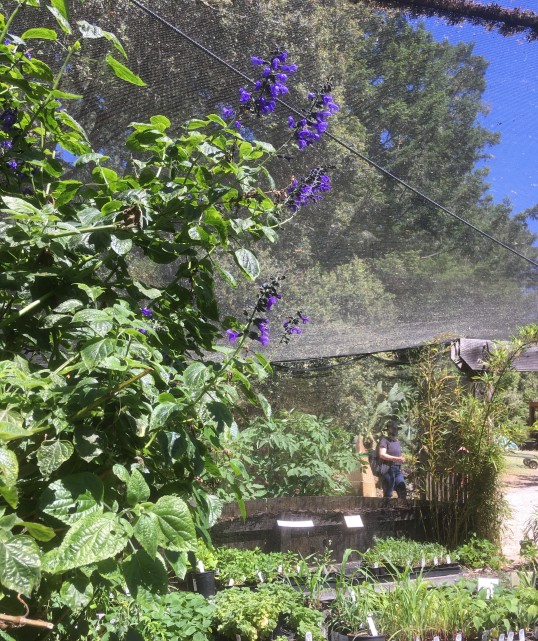 There was one plant that I had no desire to bring home for my garden, though they say it is grown worldwide as an ornamental. That is the Porcupine Tomato:

This flowering tree grows near the entrance/checkout. Does anyone know what it is? 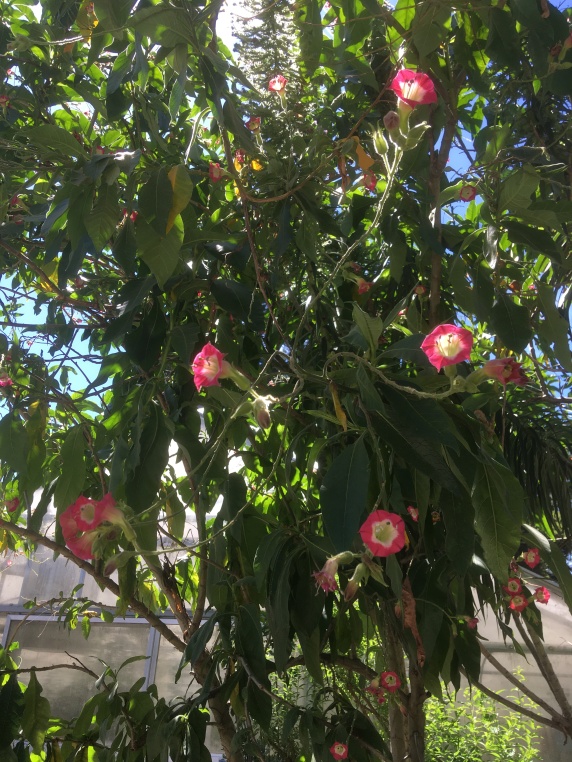 In my own garden, June seems to have arrived early, and so suddenly… I guess that’s because I’ve been sitting around moping and confused; I know I am way behind in planting the second planter box. But the rest of the garden just went on doing its thing, and is ready to comfort me now that I desperately need it. When there is a lull in the strange high winds we’ve been having, I can sit out there and silently bake, in the company of other creations and creatures. For a few moments at a time I revel in just being. 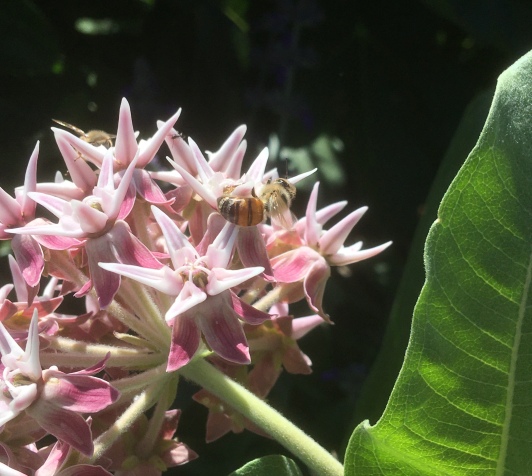 The showy milkweed is over five feet high already, and in the back yard it’s a favorite of the bees, along with the lavender and the echium. Oh, speaking of echium, I saw my type at the nursery; I must have bought it there several years ago. It is not the Pride of Madeira-echium candicans that is more typical here. As recently as last week, though, I thought it was just an oddly growing form of it. If it were Pride of Madeira it would have blocked the path by now; good thing it’s more vertical!

At the nursery my kind was called Tower of Jewels, and just now I found a helpful site that explains all the different forms. Mine is also called Tree Echium, echium pininana. I never noticed before how the echium flowers resemble borage and my newer plant, bugloss. Well, they are all in the borage family.

I took a slow-motion video of the bees out front on the germander (teucrium). In real time they seem very excited, almost frantic, in their buzzing from flower to flower, but when I watched the video it showed their true selves as purring bee-copters taking all the time in the world, that is, the whole day and their whole short lives, to do their work. 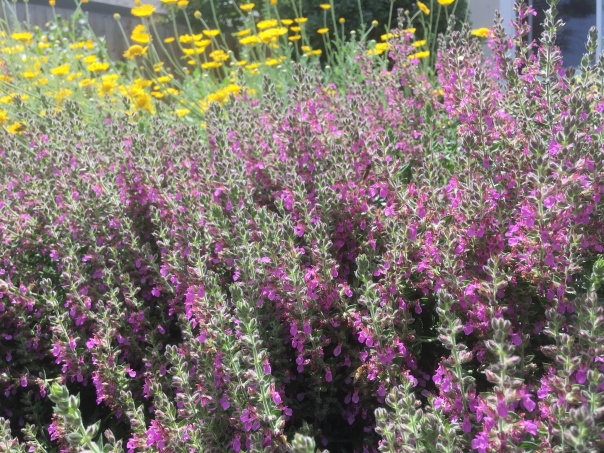 I’m needing to take long breaks from talking this week, mostly my own, which seems like more and more idle talk. No one talks in my garden. Even the tropical birds have been moved to their new home far enough away that I can’t hear them; now I can hear the native singers’ quieter tunes and gentle chirps.

I think I was looking for a quote on a different topic this morning when I ran across this beloved one (a beloved quote? really? Yes.) from G.K. Chesterton:

Women have a thirst for order and beauty as for something physical;
there is a strange female power of hating ugliness and waste
as good men can only hate sin and bad men virtue.

Forget for a moment the reductionist nature of these ideas — most short quotes, in order to be pithy, have to focus on one or two ideas and lay aside the complexities of the subject. Just think about what we are thirsty for… (You men also thirst, naturally.) I realized just this morning — by bathing in the the sunshine and the lavender scent, the breeze and the humming — and this afternoon, by speaking briefly about it with a wise person, that the very concrete realness, the materiality of my garden satisfies something. Maybe my garden has to do double-duty right now because of the recent lack of human touching.

How it helps me pray… I don’t need to figure out that mystery. I just want to enter in. 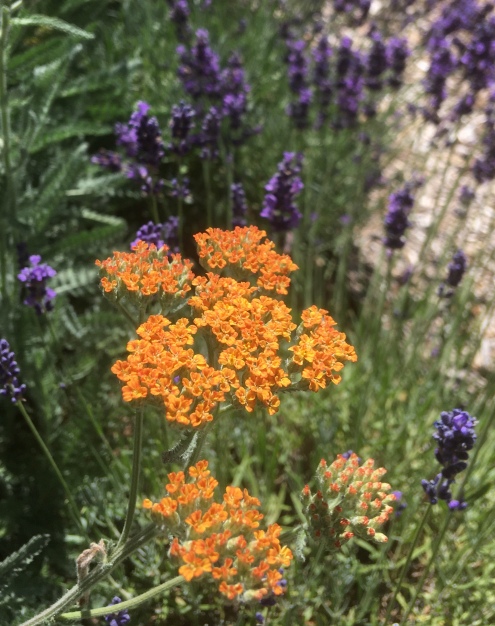 On Passover afternoon, ten days ago now, we had Kneeling Vespers of Pentecost. Almost everyone took part at home, but I live close to the church and I drove over in hopes that there would be few enough of us that I could participate indoors. My hope was realized! I’m sharing this picture because of the golden sunshine. May God fill us with His light!

In the middle of Saturday’s graduation party, Pippin and I wandered through a gate into the vegetable garden and soon found ourselves sitting in two chairs that seemed to have been set there just for us introverts, who were perhaps unconsciously following the advice given to introverts as to strategies for party-going.

After the weekend was over and we were both in our separate towns and homes again, in “recovery mode,” it was amusing how we found ourselves still together, after a fashion.

I was sifting through my pictures and notes on my phone and looking through my Weeds of the West, the book Pippin had mentioned when I asked her about a weed growing in her own vegetable garden. I was only a few pages away from finding it when on my computer a message popped up from her with a photograph of that very page. 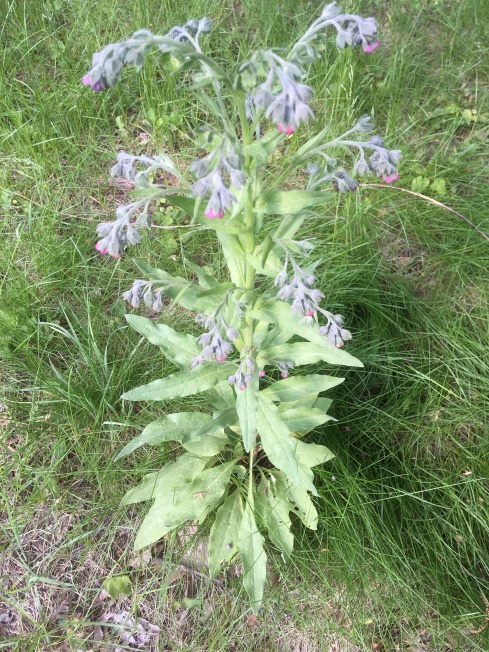 It is Common Hound’s Tongue, Cynoglossum officinale, or “gypsyflower,” which she said she always pulls out before it makes its terrible stickery burrs — and this very minute, when I looked for photos of them online, I realized that these are the burrs which one September I noticed looked like Mrs. Tiggy Winkle! It’s also the same genus as beautiful wildflowers like the Great Hound’s Tongue I saw in Oregon eight years ago.

There is also another photo of hound’s tongue in my files that I think might be Pippin’s work, because it comes from her neck of the woods and I don’t remember taking it:

If that weed in Pippin’s garden looks strangely familiar to those of you who have been reading my last several blog posts…. That’s because hound’s tongue is in the Boraginaceae Family! Yep, it’s closely related to borage. Well, well.

The first full day I spent at Pippin’s, we took a picnic to the lake before working in the garden. There we also found some plants to look into further. There was a white flowering bush my daughter told me was a ceanothus called Mountain Whitethorn, though its flowers can be blue or pink.  We saw a recumbent berry that Pippin identified yesterday as a Dewberry, a name that echoes in my mind from the distant past.

And we all stopped to look at a lovely wild rose,
until Scout in his bare feet ran into some red ants, and from then on we didn’t linger. 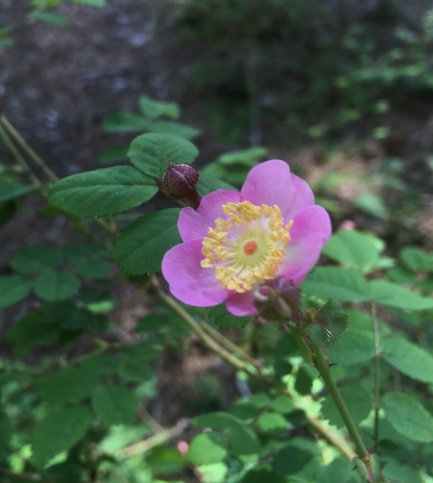 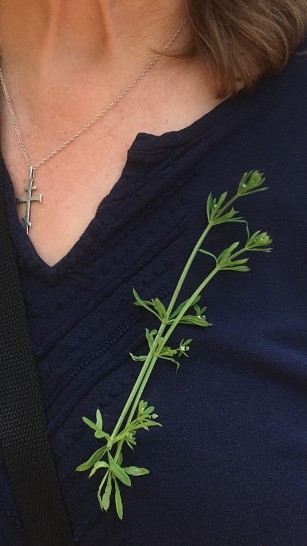 Back when we’d arrived for our picnic, before we had even got fully out of the parking lot above the lake path, we were hit by the scent of black locust trees in bloom — so delicious. And because a couple of my readers have told me that the flower petals are edible, we all tried them. They were a little dry and bland compared to pineapple guava petals, in case anyone is interested. 🙂

Right under the boughs of those trees Scout spied what he called “Botany Brooch,” and which I knew as the annoying sticky weed or catchweed, Galium aparine. But if you need a very temporary natural-looking piece of adornment, it lives up to its other nickname of “velcro plant,” and requires no difficult clasp to attach it, even after it  has wilted, which happens fast.

From this time forward, I will be less grumpy about this plant with a dozen nicknames, and who knows, you might even see me wearing a bit of it at my garden (work) parties.

When we returned to the garden that afternoon it was to plant Indian corn that Mr. and Mrs. Bread had given from their bounty. Pippin has never tried to raise corn before but she knows people who do, up there where the growing season is not long. It needed to be planted inside the garden fence so the deer won’t eat it; we decided to dig some “hills” here and there where there weren’t too many rocks to extract.

In the course of the afternoon the Professor brought us bags of compost and contributed to the dinner that was simultaneously in process. The children played all over the place, and helped to push the seeds into the earth, and discovered worms to feed to a toad that Pippin had found hiding behind a box. A salamander was unearthed and rinsed off and admired, and eventually let go in a wet area of the yard. I tried to take pictures of the striped bumblebees that are so pretty, compared to the fat black ones that I get down here.

High in an oak tree Ivy has hung a little basket of nest-making supplies for the birds. A flesh-colored button of a fungus was decorating the old stump, evidently the immature stage of what will become a dry and brown puffball type of growth; after I took my picture the children showed me how the little brown balls above would release their powder if broken with sticks. 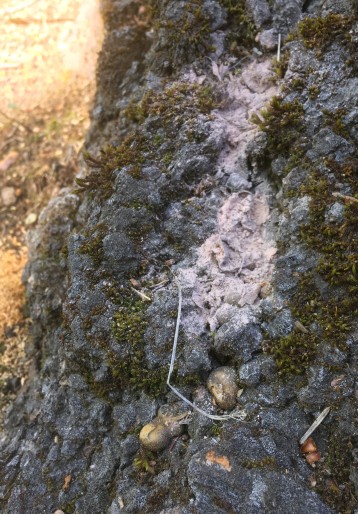 On the other side of the stump, a splash of brightness — is this also a fungus?

Around the homestead of Pippin’s family, the forest is always sharing its life and beauty. I suppose there will never be an end of things for me to explore when I spend time there. But for now, my own garden realm is waiting for me so I will send in my report and say good-bye for now!