From my planter boxes I pulled up and cleaned out parsley, zucchini, chives and Love-in-a-Mist; butternut and pumpkin vines, and a volunteer zinnia. When I went after the sea of overgrown chamomile, its warm and bittersweet aroma comforted me in the midst of that violent afternoon’s work. I don’t think I used one leaf of basil this summer; I just wasn’t home enough to take care of the garden in general, or to use half of its produce.

My pumpkins, grown from seed and nurtured in the greenhouse, were a complete flop! But one plant I gave to my neighbors produced 22 pumpkins, so one morning I found these on my doorstep: 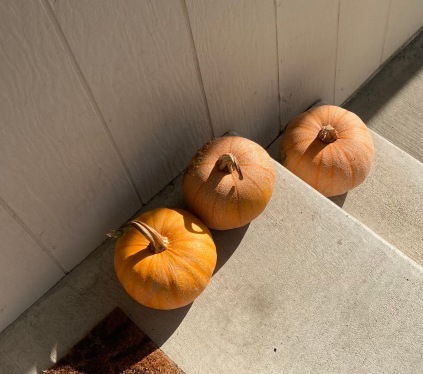 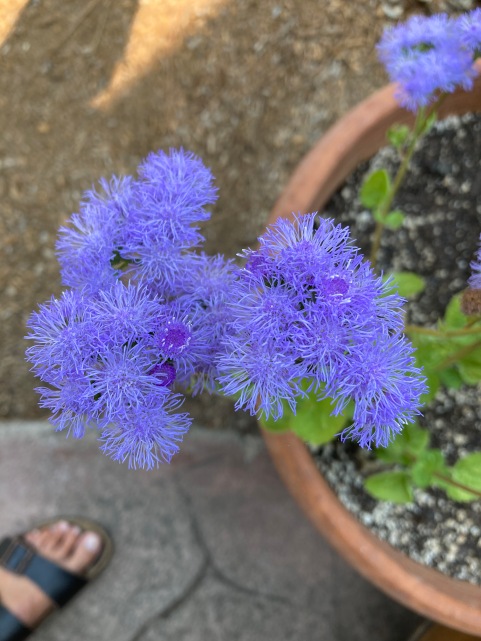 Now I’ve sealed the boxes against winter, and added several inches of good soil. Still to do: organize and plant all those beautiful succulents that my friends gave me in the last few months, and put seeds into the dirt.

I had fun with Bella the other day at the community garden where she tends a plot. We always like to look around at what the other gardeners are doing, and to forage along the edges where people plant offerings to the whole community who farm there; you might find raspberries, or cutting flowers, or kale ready to harvest and take home. 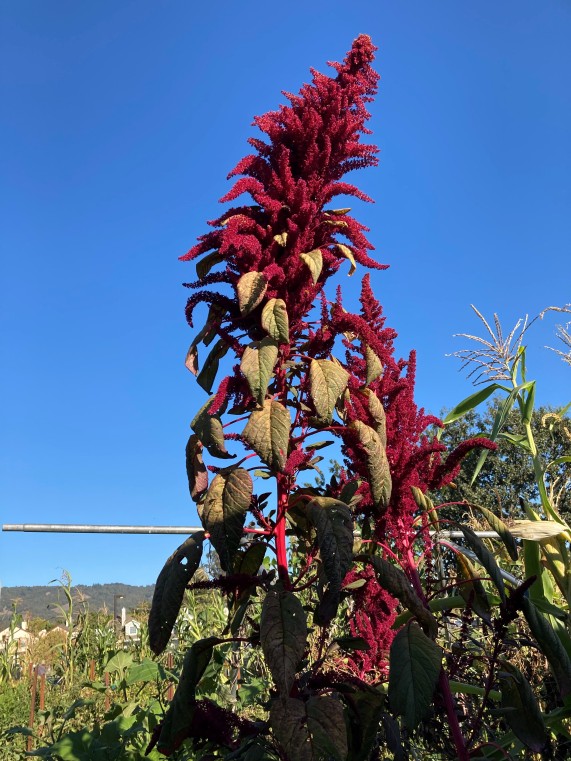 Some kind of 10-ft glorious amaranth.

I brought home seeds from that community garden, too, of tithonia, in a handkerchief I happened to have in my purse: 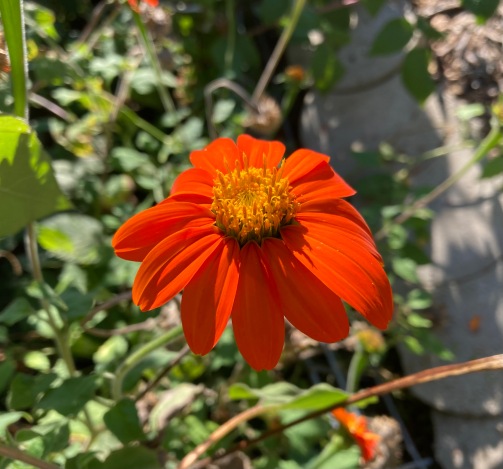 These mild days with soft air are a balm to the soul. They always surprise me with their kindness, especially when they turn up between others that are by turn sunless and drizzly, then scorching. For two weeks I’ve had my bedroom and morning room windows wide open to the weather all day and night. A cross breeze rolls over me as I sleep.

Sometimes there’s been a bit of smoke, sometimes heat at midday. At night I often have to burrow under the blankets; I hear the traffic early in the morning, and occasionally the neighbors’ loud voices late at night. But it’s the best way I know to feel alive to the earth. Simply by being open to the weather and the air, I can be In Nature. It’s the most convenient month for that, here where I dwell. September is where it’s easy to feel at home….

But — September is leaving this very week, that change is in the air. I admit to being a little broken-hearted; essentially, I’m being evicted, and that’s harsh. There is nothing for it but to take inspiration from that budding succulent stem above, that will draw on its stored resources, and make the most of whatever sunlight burns through the fog.  Those three little pumpkins will likely come in handy, too, because it’s time to start cozying up to October. 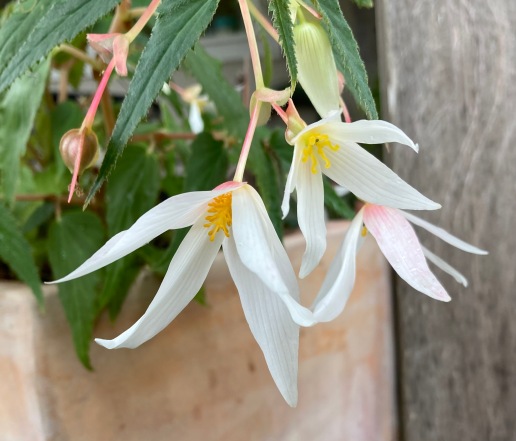 My sister joined me at the cabin on Saturday afternoon (This was almost two weeks ago now – I have been writing these reports from home); it was the first time ju

st the two of us had spent any time together as long as we can remember – maybe since our younger sister was born! We didn’t have any real adventures, but we had a lovely time.

Unless you count losing our power as an adventure, but we are used to that. The cabin is off the power grid, but we have a solar collector and batteries that usually provide enough electricity for lights.

We were brushing our teeth, getting ready for bed, when the lights went out on Saturday night, and we never got the system going again. We think the batteries may need replacing. So we used lanterns and flashlights, and two dim gas wall lamps. The refrigerator runs on gas.

We read on the dec

k, until we got too hot, or too cold, or too sleepy. We cooked lots of vegetables, and Sister barbequed enough steak to make me happy for days to come. We talked about our favorite trees around the cabin, two of which I show here.

Storm clouds gathered all day Sunday, and we watched them eagerly, hoping some moisture would fall out, and in the late afternoon it finally did. Immediately the fragrance of the conifers and the duffy earth rose up and all around us and we felt better about everything. The trees were happy and able to exhale and share their essence again.

Monday I spent the whole day combing through the Sunset Western Garden Book and some books from the library, picking out the most flowery drought-tolerant plants that would attract bees, birds and butterflies, and making lists to prepare myself for an upcoming meeting with a landscape designer. She will help me with my garden at home, once the pool is gone and I am left with a vast dirt canvas on which to paint my garden art.

I know, that was a little odd —  you’d think I should have been focused instead on nature’s glorious garden all around me. But it helped me greatly to invest some time in that landscaping project so that my mind would not feel as chaotic and overwhelmed as my yard looks right now. The mountains were a restful place where I would not be distracted by any environmental mess. 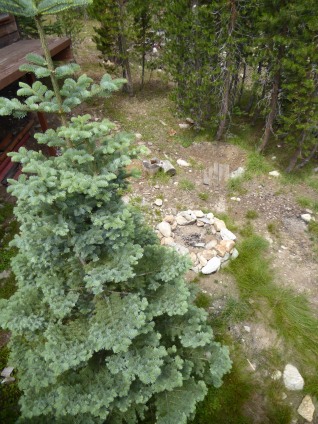 d I collected firewood from the stash under the cabin deck, and pushed and pulled it up the hill in a cart, to build our magnificent fires. She built one, and I built the next.

We read, and talked about our reading, and planned our next sisters cabin retreat, which will include all three of us at a different cabin in October. This place will be closed down by then, to protect it from the snows, which we pray will be heavy this year. Sometimes the cabin is completely covered in snow, just a bump showing under the white blanket.

The storm clouds had gathered again that day, and serious rain began to fall in the early afternoon, and continued all day and night. We were gleeful, as if our own skins ha

d been shriveled and were now plumping up again. We tried to take pictures of the wet skies. On our way to the firewood pile between showers I took a picture of the most common wildflower at the cabin right now, a tiny drenched penstemon.

Too soon it was the morning of our departure. It was certainly nice to have someone to work with, turning off the water valve and getting the cabin tidied up for the next family members who visit.

Once again, I departed late, but I didn’t expect to feel the need to take pictures on the way down, as I had done so much of that on the way up. I was really surprised therefore when the one-hour drive from 8,000 ft to 5,000 ft elevation took almost double that amount of time.

Now that I’m back home, I’m very glad I did stop a lot on that curvy road flanked by layers of wildflowers. Using my several wildflower guides I have identified three new flowers that I didn’t know before, or that I had wrongly named in the past, just from that morning.

The Meadow Goldenrod was popular with the bees. I had seen it in the meadow with the cattle on the way up, but here it was growing along the roadside.

Another plentiful flower along my course was milkweed. Like the goldenrod, it has a hundred miniature flowers making up its clusters, and the insects were feasting on nectar there, too. I think this one is Indian Milkweed, asclepias eriocarpa.

Years ago I had mistaken this next flower for something else. It is Bigelow’s Sneezeweed, which is an ominous name; one can imagine how it got that title. The blooms I saw were pretty far spent, but easily recognizable — and I actually was set straight on this one while perusing a guide from the cabin library.

It is comforting to remind myself of these things that were going on under my nose. At the time, I was hurrying down the mountain, to Pearl’s house, to get a granddaughter to take home with me. That will be the next chapter of my summer story collection.

Out of the Silent Planet by C.S. Lewis